“…Myer would like to thank you and your families for supporting our stores throughout the year! We are delighted to announce a special Christmas Shopping Offer to all Public Service employees and their families.

On Thursday 14 and Friday 15 December, you will have access to an additional 10% discount storewide, over and above the fantastic promotional offers already available at Myer Canberra City, Myer Belconnen and Myer Tuggeranong.

By presenting this flier you can make use of this special event with your Christmas shopping….”

Can anyone verify that they have actually got the 10% off? 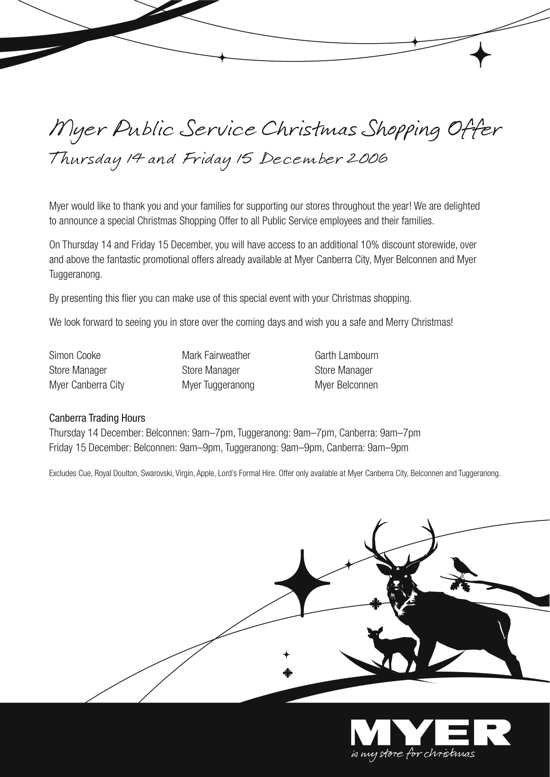 Usually works the other way around for me. 🙁

Most treads can be revived with a mention of public service bashing.

Oops, sorry. I got here from another link, just saw “15 Dec” and didn’t notice the year. *blush*

Mods, how about deleting my brainfart?

Two questions for all the people hating on public servants:

1. Are you an Australian citizen?
2. Are you a person of good character (ie, no serious criminal record)?

If so, then you too are eligible to enjoy the benefits that you envy public servants for. To succeed like a public servant, do what public servants already did: sit the competitive general entrance exam, or apply to be considered in a merit-competitive selection process for an advertised position. It helps if, like many public servants, you’re prepared to leave family and friends behind and relocate to Canberra or somewhere else where you otherwise might never have thought of moving to.

Living in Canberra and bitching about public servants is as pointless as living in Mount Isa and complaining that the place is full of miners. Without a federal public service to drive it, there would be no Canberra. If there had been a natural economic rationale for a large regional city in Canberra’s location, such a city would’ve been well underway growing in the nineteenth century. There wasn’t any such city here. In all likelihood, nearby Goulburn would simply have been a bit bigger if Canberra hadn’t been created..

I was going to say “be as a sure rock in the stream and let the it flow over you, Grasshopper”.

I just wanted to see if anyone would bite at “my taxes pay your wages”.

Have a great christmas VY!!!

Take care LurkerGal – Have a good one as well…

Shit, It’s just like Chistmas – I printed the PDS, and the checkout chick didn’t bat an eyelid –

Bugger all, my taxes pay your consultancy fees…

Hey, my taxes pay your wages: what are you buying me for Christmas???

I am SO FUCKING SICK of the public service bashing.

Where’s our fucking union when we need them.

VY, Yea, We should learn to whine, just like them, that will fix things.

Yeah, bloody public servants get all the breaks. Someone should some controls on their behaviour. I think it’s really unfair how people employed for the public good get to use that position to gain unfair advantages.

Looks like another example of Public Servants getting an unfair advantage(tm).

Hmmm, I wonder how the teachers are going in sorting out the 3-4% crap.

Any chance emd can email the flyers for Sussan and Target?

Shirley Troy - 28 minutes ago
Hope the strengths of community spirit ,awareness and support continue when this Crisis is over. View
Scott Bowen - 11 hours ago
This is amazing news! View
Anne Atherton - 19 hours ago
Love our community spirit View
Property 46