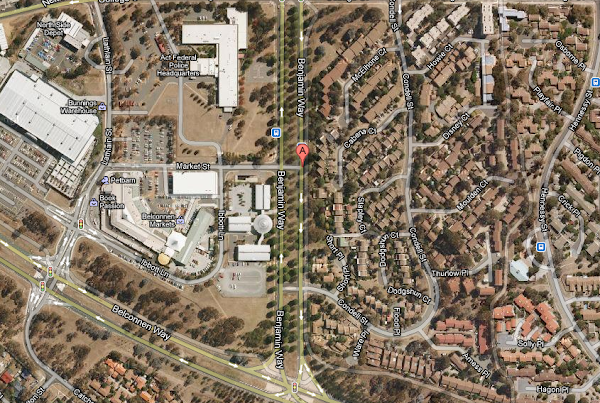 Simon Corbell has announced the end of construction and the start of fitout for the new Belconnen Police Station.

“This is a significant milestone for the project, which will provide the Belconnen community and ACT Policing with a state-of-the-art police station to best serve the Territory both now and well into the future,” Mr Corbell said.

“The 2800 square metre building will house more than 100 police officers and staff, and feature facilities such as a public access foyer and counter, five holding cells, incident rooms, welfare counselling, an area for victims of crime, a muster room and breath analysis area.

“The ACT Government’s commitment of $23.5 million for design and construction will ensure high quality policing services for the community, as well as honouring our commitment to establish an energy efficient building for the future.”

The new station’s on the corner of Benjamin Way and Market Street.

It looks like a 1970s suburban high school administration building. I’m taking bets for how long until there are cries for it to be expanded.

Colin Vivian - 39 minutes ago
Elroy Jones and if you look at the ACT audited financial statements you’ll find net financial liability, net debt, net oper... View
Elroy Jones - 3 hours ago
Ruth Brown that’s because they’re underground (where they should be!!) DA won’t get through this Gov without serious at... View
meomi - 9 hours ago
This is horrible! There are many water birds and insects nest in the plants along the lake, now all become concrete! The conc... View
News 1