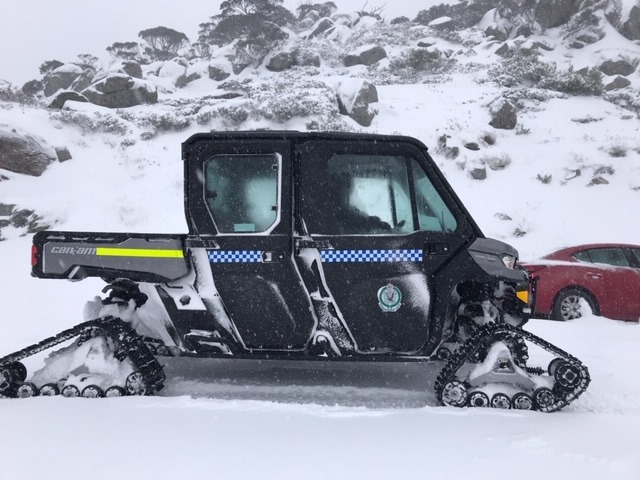 This week’s dump of snow has given local police an opportunity to use a new ‘over-snow vehicle’ to help a man stranded in his car.

Jindabyne Police responded to a call for help yesterday on Kosciuszko Road at Charlotte Pass. On the back of heavy snowfalls that started on Sunday and rolled into the week, a 35-year-old man found he was unable to drive his vehicle away.

Initially, the man drove to Charlotte Pass, parked his vehicle and walked to Blue Lake, a popular destination for hikers. Upon returning to his vehicle at around 7 pm on Sunday night, the weather had deteriorated forcing the man to sleep in his vehicle for the night.

Continued winds and heavy snowfalls into Monday added to the man’s predicament.

Luckily a local resident driving his snowmobile saw the man and called for police assistance.

Chief Inspector Mick Tranby swung into action, using the newest addition to the police fleet, an ‘over-snow vehicle’ to retrieve the man and bring him to safety. 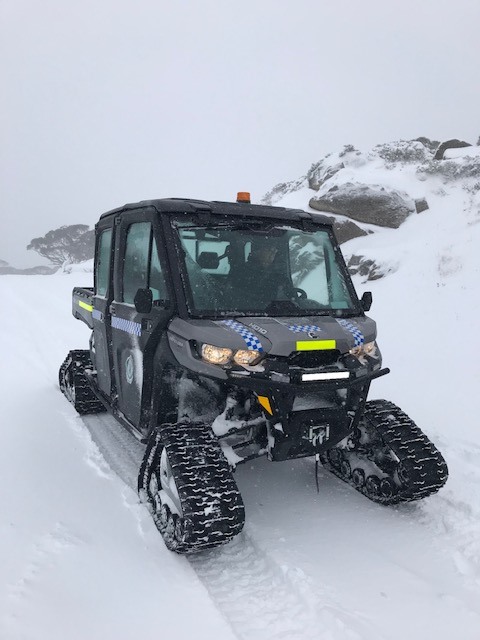 theroundone - 2 hours ago
This seems somewhat disingenuous. It seems that people in politics can hide behind so called mental health problems in order... View
Community 3

steve2020 - 3 hours ago
This is a good opportunity to showcase post-COVID design in the layout of the cinema, such as socially distanced seating. It... View
ACT Election 48

chewy14 - 4 hours ago
JC, The requirements are outlined in the National Capital Plan and both supporting documentation and the legislation. This al... View
maxblues - 4 hours ago
Greens highlighting the inadequacies of trams. Brilliant. View
ACT Election 21

George Watling - 13 hours ago
No body is saying no community housing. What people are saying is don't build it in our parks and open spaces. Once they are... View
Opinion 7

Sueanne Matthews - 13 hours ago
I love it and it should be a permanent feature. It really lifts the spirits. View
show more show less
*Results are based on activity within last 7 days

The Canberra Liberals have unveiled a series of education initiatives, including a back-to-basics learning and curriculum approach and a direct...
ACT Election 48

Multi-vehicle crash near Jindabyne an example of the dangers

@The_RiotACT @The_RiotACT
As the Brumbies prepare to face the Reds tonight, former Brumby & Wallaby Josh Mann-Rea has just won his first ever grand final – at the age of 39 https://t.co/LKwLdllTTu (56 minutes ago)

@The_RiotACT @The_RiotACT
A treasure storehouse of all things Australian has been secured by the National Museum of Australia for more than $8 million, in a ground-breaking acquisition https://t.co/2OOyy33bRO (2 hours ago)

@The_RiotACT @The_RiotACT
If you're cranky about corflutes and peeved by pamphlets, spare a thought for the minor parties and independents in this election campaign. Candidate Bethany Williams says it's pretty hard to grab voters' attention https://t.co/2kQFGEwwEG (3 hours ago)