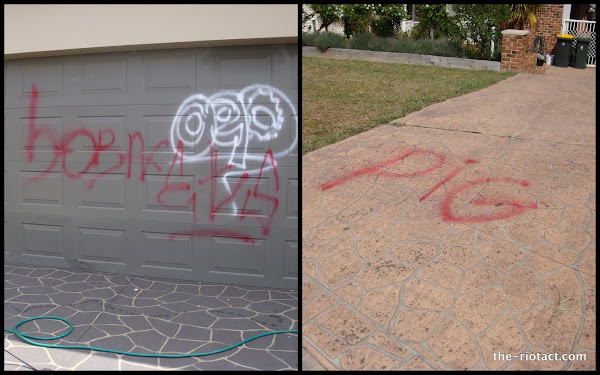 ACT Policing is seeking witnesses to a number of instances of graffiti that occurred in Ngunnawal in the early hours of yesterday morning (Sunday October, 27).

At 9.50am, police were called to a residence in Ngunnawal in response to offensive graffiti sprayed on the garage of a house.

Police received information that two suspicious males had been seen in the area about 12.30am that morning and that, at that time, the garage had been vandalised.

In conducting a patrol of the area, police identified a number of locations where the premises and vehicles had also been vandalised.

Due to the proximity of locations, the colours used in the graffiti and the types of messages written, police believe these incidents are directly related.

Police are urging anyone who may have seen two suspicious males in the Ngunnawal area early Sunday morning to contact Crime Stoppers on 1800 333 000, or via www.act.crimestoppers.com.au. Information can be provided anonymously.

I’ve seen some awful tag scrawl and some beautifully creative pieces in my time and been able to decipher the majority, but that one had me stumped on the R that looks like a B, the N that’s slightly retarded and half crossed out, the E that looks like a G with a hat on and the most ridiculous T I think I’ve ever seen.

It’s been a while since I did it, but I finished a Uni degree on how to decipher ass hats, well worth it, I use it more than I do calculus…

The “090?” is reasonably easy to decipher, but I reckon the red is “hobnka” with “gts” under it. About what you’d expect from the illiterate trash who do this sort of thing. Definitely candidates for the stocks, with their collection of vandalism tools placed beside them for passers-by to use in whatever creative ways they can imagine.

I’ve seen some awful tag scrawl and some beautifully creative pieces in my time and been able to decipher the majority, but that one had me stumped on the R that looks like a B, the N that’s slightly retarded and half crossed out, the E that looks like a G with a hat on and the most ridiculous T I think I’ve ever seen.

I walked past this morning and avoided a fat chick thanks to the thoughtful graffiti artist.

I heard the guy that lives there had a bit of a tiff with his missus. Apparently he came home drunk at 3am smelling like perfume, crawled into bed, farted, then shook his missus and said “OK your turn, fatty…”

Not sure why she was cranky, though.

I walked past this morning and avoided a fat chick thanks to the thoughtful graffiti artist.

This is simply a community service announcement that a serving police officer lives at this residence and that passers-by should exercise appropriate caution.

Phil Cowan - 55 minutes ago
The 26th Jan is a Public Holiday because on the 26 Jan 1949 because we ceased being British subjects and became Australian ci... View
ghutch - 11 hours ago
A lot of good comments. Why don't we celebrate Oz Day on 1 Jan. Yeah I know you all still asleep from new year eve. But is th... View
Jenny McInnes - 12 hours ago
David Johnson it most likely was a public holiday there then View
Opinion 55

Tim McMahon - 2 hours ago
let’s put rego and insurance on these bikes as well as road worthy checks every year just like cars trucks and everything e... View
Colette Robinson - 6 hours ago
Adrian Fui Fui Moy but the path *is* being used for racing. Pedestrians and slower cyclists in either direction are merely ob... View
dolphin - 8 hours ago
despite your name you are neither rational or a very good observer. View
Lifestyle 1

Peter Curtis - 8 hours ago
It is $500m not being spent on anything else but a dubious project to say the least. Ian tries to explain it all away as acts... View
Breaking 2

Peter Curtis - 9 hours ago
Not to sure what a "Canberra mentality" would be but as long as we surrender the principle of solidarity for the belief that... View
Food & Wine 1

Jackie White - 13 hours ago
Thank you. I never walk around the lake with headphones precisely because of the risk of collision with a cyclist View
James Messervy - 13 hours ago
Jackie White no, I always ring my bell or call out.... View
Community 7

Susanne Jennings - 13 hours ago
Great to see it so successful- well done! View
show more show less
*Results are based on activity within last 7 days

Anyone who was finding their way as a young adult in Canberra in the mid-1990s knows that a night out...
News 18

Your forever family home in Ngunnawal is ready for you

First family-home ready for you in Ngunnawal

@The_RiotACT @The_RiotACT
Have the voices of post-Vietnam veterans been missed in the fight over the War Memorial expansion? Some veteran organisations say yes https://t.co/UC34DwlGFC (5 hours ago)