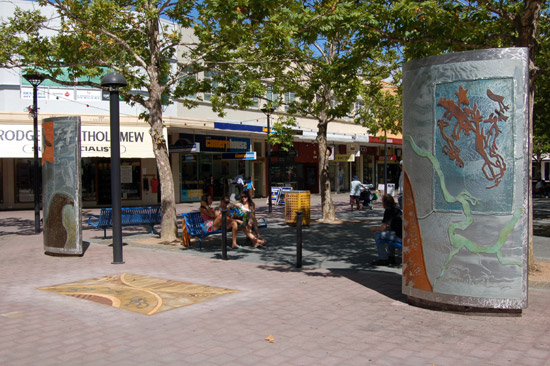 The work is titled Reclamation: Culture, Spirit and Place and was designed by Sandra Hill from Western Australia and Jim Williams of the Ngunnawal. Ms Hill said, “The artwork celebrates the survival of the spirit, the courage and the dignity shown by the Ngunnawal people as they move into the future.”

In what seems to be a rather cheap way to build a public artwork, Mr Stanhope has seen fit to appropriate a public asset, namely the two poster silos, to push his own political agenda. Although he has promised there are other silos under construction elsewhere in Civic, one wonders how long it will be until the first posters are plastered on the artwork.

And on a side note, I did wonder about the survival of spirit, courage and dignity this gentleman was displaying not 50 metres from the new work. 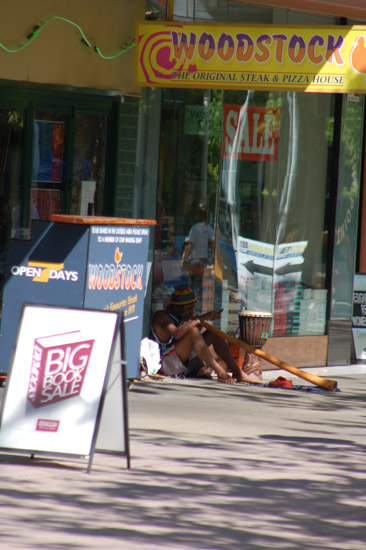 Apparently not, hence the Chief Minister’s opening speech: “I’d like to acknowledge the prior ownership of the Ngunnawal People, untalented sods…”

It’s interesting that they used a West Australian as principal artist on the project. Surely there is sufficient local talent amongst the Ngunnawal people to have managed the project.

You can be sorry that something bad happened to someone, without having actually done it to them yourself.

And you can be sorry that they and their people continue to live in very poor conditions.

Did I complain about the art?

Did I complain about stealing public space?

So what is your problem Woody? Maybe you should just hang yourself to show how bad all us european decended people are? Maybe everyone should just pack up and go back to England?

By the way, I didn’t make up the phrase, ‘black armband view’. Someone else did.

I’ve said before that no-one should take to heart Manning Clark’s view of Australia and equally they should dismiss Windschuttle’s rubbish. The facts are some where in between.

And I have never committed genocide so why should I apologise for something I have never done? In fact I can’t remember ever saying anything nasty or untowards to an Aboriginal person. Guess I’m just a nice guy deep down…

I couldn’t be bothered getting into this discussion again…

How can they sleep at night these days knowing the carnage that the socialist North Vietnamese introduced once the septics pulled out.

Probably the same way you can sleep at night knowing the carnage the English and their succesive colonial governments introduced on Aborigines, but feel the need to call it a “black arm-band view of history”.

Perhaps we could get a couple of photos of non-Aboriginal buskers next time? You know, to remove the taint of Today Tonight-esque editorialising?

In the mean time, where will people put up posters to advertise their events

Am I the only one who can see the irony of a bunch of immigrants and their descendants complaining about Aboriginal people stealing their public space? Reminds me of the Tent Embassy – I mean, how dare those people just stroll in and erect structures wherever they feel like it? They’ll want the vote next!

I’ve got to say this really does look a bit crappy – not the artwork, but the way it’s been presented. You can still see all bits of poster paste underneath.

But the more important point is, why there? That was prime postering real estate. Thereâ€˜s a ridiculous lack of legal postering spots around civic as it is, and while they claim theyâ€™ll put up new silos elsewhere, I canâ€™t see them being erected in a hurry. In the mean time, where will people put up posters to advertise their events?

Actually, at first sight I thought it was something promoting Chinese New Year. What is it…Year of the Pig (hmmm, Pig…how appropriate for Stanhope).

Looks more like a confluence of Japanese and Fusion art over any local styles.

Another example of people plugging any old thing, giving it a traditional sounding name, and onselling it to some stupid idiot with a big chequebook.

I bet whoever produced this thing applied for indig. grants to produce it as well.

I could always create a haven for bogans to protect them from the outside world and get a $300k windfall for my efforts I suppose.

There are protests against the Chinese Government in Garema place most days. If you want to help i am sure they would appreciate your assistance.

Also you may remember the Falun Gong would protest outside the Chinese Embassy, but i think the Feds banned them protesting there. That may be why you can’t remember them.

cant recall the last time i saw a protest against the vile repressive dictatorships in vietnam, north korea, china etc.

they were cowards then and they will never change.

Wonder how long before a greenie posts a Tucker poster on it or perhaps Aidan Bruford spray paints some graffiti over it?

Just thinking about anti Vietnam war hippies. The pricks that pestered my dad and his mates, and my first instructors.

How can they sleep at night these days knowing the carnage that the socialist North Vietnamese introduced once the septics pulled out.

I guess they don’t even think of it, and I’ll bet you they all turn up to ANZAC Day.

What a fcuking waste of money.

Anti Howard campaigners who think the sun shines out of our CMs arse?

Lazy left over hippies from the Vietnam era who still think Gough Whitlam was the greatest world leader of all time?

What votes are there in it?

I quite like the look of them, but I’ll reserve judgement until next week when I can go and see them myself.

However, I’m still a little peeved at Stanhope continually pushing the same mantra for his own self gratification.

Looks shithouse. What a crappy way to promote what could have been interesting and attractive.

@The_RiotACT @The_RiotACT
Rachel Greaves and husband Gavin McKay launched @CastlepointSys2 about 18 months ago and have grown from just them to a 16-strong outfit with 20 clients across government and business https://t.co/NUcOwCMS7T (22 minutes ago)