Two people have died in a three-vehicle collision on the Barton Highway at Wallaroo, 3.5 kilometres north of the ACT border.

NSW Police report about 8 am this morning (25 May), two vehicles collided on the Barton Highway, Wallaroo, near the ACT border.

Two passengers in one of the vehicles died at the scene and both drivers have been taken to hospital for mandatory testing.

Multiple passengers in both vehicles have been taken to hospital suffering non-life-threatening injuries.

As a result of the head-on crash, one of the vehicles crashed into a third car. The driver and passengers of the third vehicle were not injured.

The Barton Highway is closed in both directions between Murrumbateman and Canberra.

A NSW Police spokesperson said the highway would be blocked “for a long time”.

Police are diverting traffic to Federal Highway via Sutton Road. 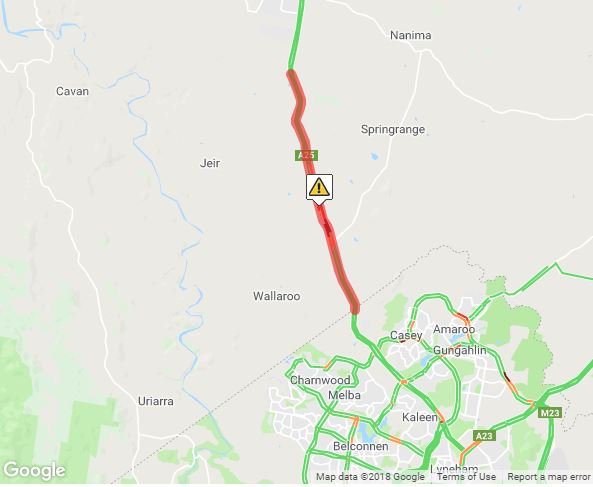 The highway will remain closed for some time while investigations are carried out by officers from The Hume Police District.

Sharon Cabban - 11 minutes ago
Lani Metcalfe future for Jack View
Kathie Nash - 60 minutes ago
Canberra will never get its own AFL team while we only have a 'stadium' that holds 13,000 at maximum. Need a bigger stadium t... View
Olaf Moon - 5 hours ago
Tasmania First, NT second View
News 31

Ashley Hillstead - 20 minutes ago
That being said it looks like losing a prop won’t take their drones out so I guess they just hack it and repair any damage View
Ashley Hillstead - 22 minutes ago
Dean Okeeffe anyone who’s ever used drones even recreationally knows birds go for them too, there are hundreds of videos on... View
Food & Wine 15

Julie Macklin - 23 minutes ago
Peter Hatfield Not faster if the bus gets stuck in peak hour traffic in Sydney, as has happened to me. I used to catch the bu... View
Peter Hatfield - 59 minutes ago
Or just go to the Jollimont and catch a comfortable coach and be in Sydney an hour faster, and at a fraction of the real cost... View
Greg Myat - 3 hours ago
Ross McConchie I agree with you entirely about using rail more to get trucks off our main routes. But trains are the most eff... View
Property 13

Kacey Butterworth - 25 minutes ago
Tim, let’s move. View
Jodie Kerec - 2 hours ago
Lisa Van Schieveen we could live here together. View
Gabrielle Driver - 3 hours ago
Lauren Edney look how nice it is. I'd have the cottage View
Sport 7