Outside the Raiders. Now with police statement. 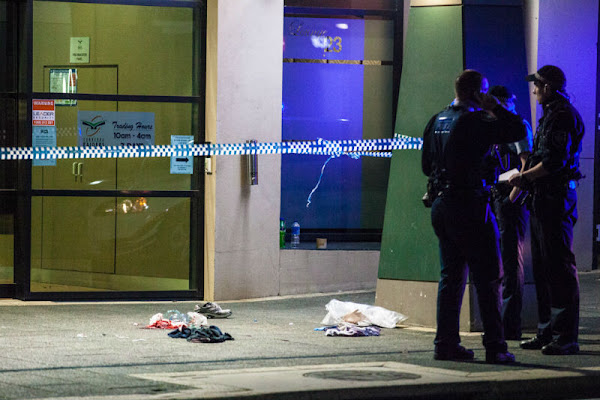 These in from Adam:

Someone got hit so hard they saw Green… and Red&Blue.

The police interaction was particularly pleasant, but they didn’t have anything to say about the incident 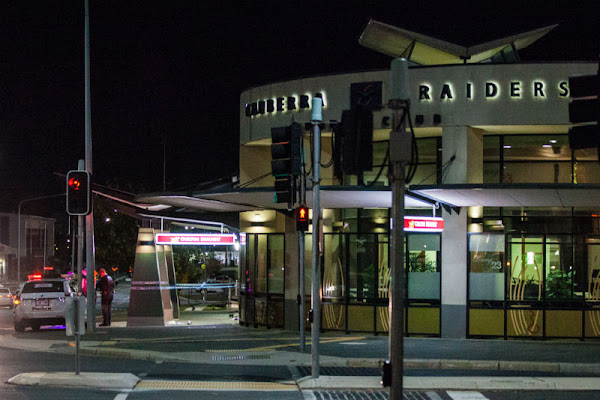 So which of you readers can invent the best fictional back story?

UPDATE: We now have a statement from ACT Policing:

At about 8.45pm yesterday police were called to the Gungahlin Canberra Raiders Sports Club where the ACT Ambulance Service was treating an unconscious 40-year-old male. The male had sustained serious head injuries following an altercation with a 26-year-old male at the venue.

The injured male was conveyed to Canberra Hospital for treatment and is now in a serious but stable condition.

Anyone who may have witnessed the incident yesterday evening and has not yet spoken to police is urged to contact Crime Stoppers on 1800 333 000, or via www.act.crimestoppers.com.au. Information can be provided anonymously.

7 Responses to Outside the Raiders. Now with police statement.
Filter
Showing only Website comments

I’m glad serious head injuries can still be joked about…

“Earlier today, Police and Animal Control officers were called to a disturbance outside the Raiders Club in Gunghalin, where an as-yet-unnamed senior Canberra Raiders player was attacked by a pack of Golden Labradors.

After a two hour stand off, Animal Control Officers were finally able to contain the vicious pack of Golden Labradors after agreeing to their demands for “walkies”, and have now taken them to the ACT Pound for containment and processing.

The Canberra Daily Times Telegraph has been informed that what initially appeared to have been a random, unprovoked attack, is now being investigated by Police as a revenge attack for an episode in which a former Canberra Raiders player attempted to force a Golden Labrador named Todd, to lick his genitals in a drunken prank.

Canberra Raiders management released a statement at midday to say that as far as they are concerned, the Police are barking up the wrong tree as far as the investigation is concerned, and have denied any wrongdoing by members of the team.

The Canberra Kennel Club and the manufacturers of PAL dog food, have been contacted for further comment, but neither party has so far responded to our request for comment.”

One my mark – set your fingers to “wag”.

I’d probably wait for a statement from police confirming the condition of the person hit before asking for jokes JB.

Joshua McTackett - 3 minutes ago
Unsurprising for this lot of profit driven turds. Geocon has been actively ruining Canberra for years now, and this is just a... View
Julia Ross - 16 minutes ago
Corey Karl hmmmm, money has changed hands methinks. View
John Elliott - 17 hours ago
I live within 100 metres of the Establishment and I don't see a problem. So many people are whinging and complaining. The bui... View
News 18

Chris Cross - 25 minutes ago
I don’t care if she’s Liberal or Labor. That’s not the point. It’s not a ‘mistake’ to repeatedly speed. Its a tot... View
Chris Cross - 30 minutes ago
Lots of people here excusing her behaviour, and its pretty disappointing. Political beliefs aside, how many times must someon... View
Ric Stumpf - 32 minutes ago
Back on your broom! View
News 6

Mark Dando - 1 hour ago
I don't get the level of coverage here of the views of these self-appointed 'guardians'. If the comments on this and the prev... View
Liam Matthew - 1 hour ago
There is not significant community disquiet about the proposed development. Calling yourself the Guardians of something doesn... View
HSewell - 4 hours ago
Genuine question: why should we pay attention to a self-appointed self-named group like the "Lake Burley Griffin Guardians"?... View
News 1

Acton - 4 hours ago
Will resisting arrest constitute assault against a police officer? What if you resist arrest while at a peaceful demonstratio... View
Gregg Heldon - 7 hours ago
It's the ultimate disrespect, isn't it? And should be treated as such. The real question is, will the court protect those who... View
News 1

Warwick Alsop - 5 hours ago
I don't disagree necessarily, although we do still have a guaranteed full week of work that isn't just cancelled on a whim by... View
Archie Mac - 8 hours ago
The amount of young people in Canberra who are given an unpaid ‘trial’ needs to be investigated too View
Opinion 2

Adam Briscoe - 8 hours ago
Must be some sort of election on the cards. View
show more show less
*Results are based on activity within last 7 days

With Canberra’s frosty winter mornings just around the corner, there’s nothing nicer than a hot shower to warm you up. So nice...
Business 7

A groundbreaking decision by the Full Bench of the Federal Court is likely to have significant implications for any employers...
News 19