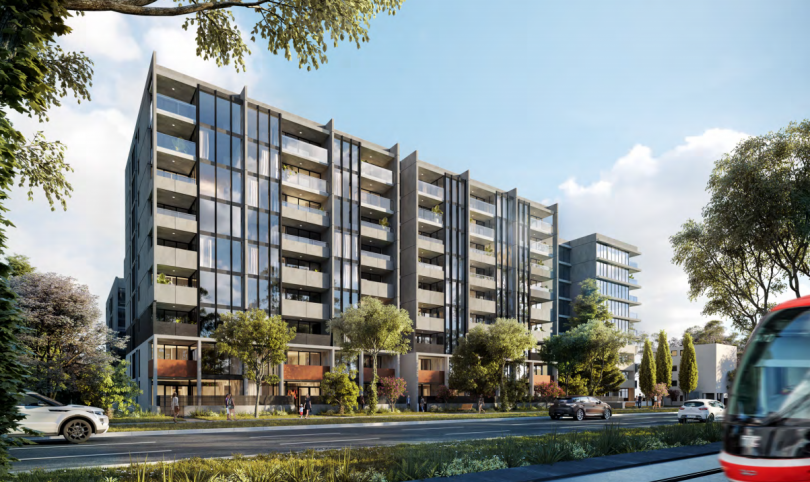 The appetite for apartment development in Canberra, particularly on the light rail-enhanced Northbourne corridor, remains strong despite the COVID-19 shock to the economy, with developers taking the long view.

The ACT Government recently listed the former Macarthur House site on the corner of Macarthur Avenue and Northbourne for sale by tender and agents are expecting strong interest locally but also from interstate in the land, which can yield more than 400 units.

The three-stage Lyneham on Northbourne project borders Owen Crescent, De Burgh Street and Sullivans Creek and will likely result in a total of 965 units, including a heritage area.

An illustration of the Lyneham on Northbourne precinct, showing the three stages. Image: JWLand.

Stage 1 backing on to Owen Crescent is under construction and JWLand is now ready to move on Stage 2, next to Sullivans Creek, which consists of a nine storey building and another up to eight storeys (214 units in total), as well as seven re-imagined units in the heritage bachelor flats that have been retained on the site.

The 27.5 metre high nine-storey building will front Northbourne while the other sits behind, with setback units of two storeys on De Burgh Street rising to an overall height of 25 metres, although the street frontage will be six storeys high (19.56 metres).

JWLand proposes a mix of studio, one, two and three-bedroom units including eight that are adaptable, as well as a gym and landscaped communal area.

Three levels of basement parking are planned, including 278 car spaces for residents, 18 for visitors and one bicycle space per apartment in storage cages.

The Estate Development Plan will create three multi-unit, mixed-use sites for Stages 2 and 3, comprising 784 dwellings plus spaces for commercial and other uses.

JWLand is proposing two nine-storey buildings for Stage 3, between Northbourne Avenue and De Burgh Street, one a large 315-unit structure surrounding a green, communal space and the other a smaller 105-unit project next door.

The larger building will be a mix of one to three-bedroom units while the other will one and two bedrooms.

Like Stage 2, the De Burgh Street frontage will step down to six storeys.

Canberra Town Planning, which prepared the DAs, says the Northbourne Avenue corridor is a rapidly changing cityscape with development at the nearby Dickson group centre and light rail catalysing the change, an assertion confirmed by the government’s recent 12-month review of light rail Stage 1 which found the project had boosted property values and encouraged population growth.