I’ve been noticing some of our police cars are a lot flashier these days. 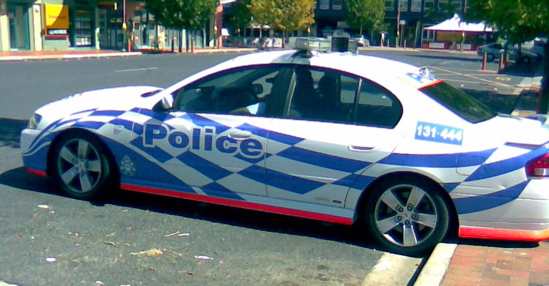 Would we, perhaps, prefer a more utilitarian and cheaper get out?

I wouldnâ€™t know – I donâ€™t speed.
Where I come from, if you speed:
They shoot your tyres out
pull you out of the car at gunpoint
spread you over the bonnet face down
shout loudly in your face, threatening to do nasty things to you.
-You wouldnâ€™t want to be rude & impolite.

Hasdrubahl obviously had dealings with the QLD police before the Fitzgerald Inquiry.

The paintjob doesn’t inspire me with ‘responsible and down-to-earth organisation that is charged with looking after my best interests from the criminal element’ feelings.

The old paintjob, aka the standard colour scheme, does.

Perhaps they should leave the dressy paintwork to the people they are pulling over, and save the taxpayer a few quid at the same time – the more complex a paintjob, the more lucrative the contract.

When I first saw bonfire talking about his Stanley Steamer I assumed it was rhyming slang for a BMW.

When I was travelling through Africa my Dad attempted to convince me that I should purchase cigarettes as they are apparently essential exchange gifts at borders….Needless to say I ignored my father (like any stubborn daughter) – I purchased nil cigarretes and had no issues at all.

We did have one small incident in Tanzania when we got on the bus from the border of Kenya to Dar Es Salaam, we had a rest break half way along the journey and when we got back on the bus we couldn’t find a seat, it turned out we had not booked seats the whole way through – so we did end up paying the full fare to the conductor’s back pocket to have the priviledge of sitting on our backpacks in the aisle for the remaining 5 hours of the trip!

That definately wouldn’t happen in Aus – they would just leave you stranded and shitty!

The Africans are so helpful and friendly 🙂

Totally valid when the said cop is holding an AK47.

terubo: I’ve always wondered how to handle that situation in a foreign country. If it backfires, you can be in a whole crapload of trouble there, and when you get home too. It’s a crime under Australian law to bribe a foreign official.

Still, I’ve heard that through most of Africa, and parts of the former Soviet Union, you won’t cross a border without handing the officer your passport and some hard currency folded in it.

I reckon bonfire was using a metaphor for something blowing a bit of smoke and steam. OTOH, if it’s a real Stanley Steamer, when can I come over to drool 😉 ?

Different countries, different customs:
Was with a mate in Malaysia some years ago, on the highway to Malacca…he got pulled over for speeding.
He just handed the cop a couple of banknotes, cop smiled and saluted him, off we went, no worries.
-Anybody ever tried that here?

Nowadays, with the hindsight of maturity, I would probably endorse the Thumper/bonfire method â€“ simply because it might save you the cost of a half-decent bottle of red. But itâ€™s all evolutionary really, back then my response could reasonably be described as being toned down â€¦ but that would be off topic.

I didn’t know either so sorta filled in some time researching….

This might be a stupid questions…but what is a Stanley Steamer?

only had one ‘nasty’ encounter with act police.

at a xmas rbt roadstop a fat sergeant took exception to the stanley steamer and started shouting things like – stop him , get him to the side of the road’ gesticulating wildly to the underlings and SHOUTING everything.

he naturally defected me, even though i showed him the engineering certificate. he told me i was ‘interfering’ and did i want to be charged.

he was rude and objectionable. i suspect he was showing off to some new recruits. or he might have been having a shit day and as ive found with women, you dont provoke upset people.

i raised his behaviour with a friend who is a cop and he id’d him straightaway and said he had form.

anyway, i just copped it, drove through the dickson RTA sheds the next week and went on my way.

most of my other dealings with act cops have been ok – bar the defects they plague me with.

i swear they have a quota.

None at all. Go back to work.

Hasdrubahl didnâ€™t like Lee Kuan Yew receiving an honorary doctorate from the ANU as he ran an autocratic state but doesn’t have a problem if police “pull you out of the car at gunpoint” etc. Of course no hypocrisy here!

I wouldn’t know – I don’t speed.
Where I come from, if you speed:
They shoot your tyres out
pull you out of the car at gunpoint
spread you over the bonnet face down
shout loudly in your face, threatening to do nasty things to you.
-You wouldn’t want to be rude & impolite.

Maybe we need more of that here.

Although I have noticed that the cops are a lot more polite now they have audio recorders (at least in NSW).

That XR8 doesn’t excite me much. I don’t know why they don’t just use base model Falc/Commy, given they don’t seem to chase people above about 160km/h anyway.

The language you use is more an issue when you try to convince a speed camera not to give you a ticket.

@The_RiotACT @The_RiotACT
In this week’s RiotACT newsletter: which Target stores are closing? What’s the latest COVID news? Why are Braidwood’s historic trees set for the chop? Catch up here https://t.co/7vn958SSUV (7 hours ago)