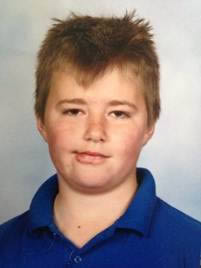 Police believe he may be staying with friends.

Kane is described as 152cm tall, with a solid build, light brown hair and brown eyes.

Police have concerns for his welfare due to his age and the length of time he has been missing.

Anyone who has seen Kane or knows his whereabouts is asked to call police on 131-444.

I saw this in Canberra times…..north side? South side? A suburb or area would help, when people hear about something happening in their suburb they are far more likely to pay attention.

Hope the kid is safe and well, wherever he is.

I would say this was a deliberate omission – this release was never for the general public to keep an eye out for this boy – it was all about making him and his friends realise that he’d been reported as missing and that the police were looking for him.

Seeing as he’s now reported to the police safe and well, it seems to have been the right approach too. They must have had a very strong suspicion that he was ok, with people he knew. Who knows – maybe he told the parents of whoever he was with that his parents knew where he was, and everything was fine. I imagine that seeing a story like this on the news would soon shock you into action!

I saw this in Canberra times…..north side? South side? A suburb or area would help, when people hear about something happening in their suburb they are far more likely to pay attention.

Hope the kid is safe and well, wherever he is.

Ken McInnes - 41 minutes ago
Great people great coffee always a smile just a happy place. Well done it’s always nice to see a family working together da... View
Neridah McMinn - 2 hours ago
My absolute favourite place for a Saturday morning breaky 💕 View
Graeme Jeffries - 3 hours ago
I always stop there for a great coffee and toasted cheese and tomato sandwich. A friendly place and service with a smile! May... View
Opinion 2

Natalee Gersbach - 2 hours ago
No need yet. Will wait and see if this cooler weather changes that.... View
Chris Threadgate - 3 hours ago
Arggh I thought it was freezing 🥶 here last night can only imagine there🥶 View
Jackie White - 3 hours ago
I've had it on nearly 24/7 for a month! #gettingold View
News 83

Jo Hann - 3 hours ago
Nada Krstin and, addressing your query as to whether they're qualified, there's no cognitive test either. We do not deem an e... View
Jo Hann - 3 hours ago
Nada Krstin there are 16 and 17 year olds who earn over $18k. The potential to pay tax is all that should be required, though... View
Nada Krstin - 11 hours ago
Jo Hann see my recent post to reply to your "if you pay tax, you should have an option to vote for the government that spends... View
News 26