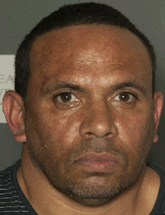 Mr Wymarra is described as Aboriginal and Torres Strait Islander in appearance, 173cm tall (5’7”), medium build with tattoos on the inside of both arms.

Anyone who sees Mr Wymarra is urged to contact police immediately on 131444. Do not to approach Mr Wymarra.

Police are also urging anyone who has any information that could assist police to contact Crime Stoppers on 1800 333 000, or via the Crime Stoppers ACT website.

Jacq Miller - 2 minutes ago
shame there are no longer all 4 in situ View
Barry Matson - 2 hours ago
of what? View
Michael Guina - 3 hours ago
It has to start somewhere and those two buildings are living example . View
Opinion 80