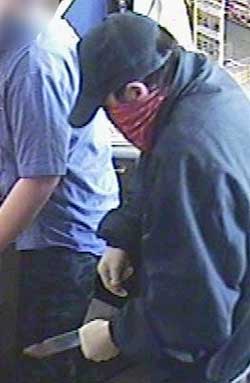 ACT Policing has released CCTV footage of an aggravated robbery which occurred at a video store in Wanganeen Street, Ngunnawal, on Saturday (October 17).

Police were called to the Video Ezy store in Ngunnawal around 4pm (October 17) after it was reported a man with a red bandanna or handkerchief covering the lower part of his face had entered the store and threatened a staff member with a knife.

The offender took a sum of cash from the till and fled the store on foot, running south through Gamban Square.

The offender is a male described as being Caucasian, in his late teens to mid 20s, 5’8” (173cms) tall, with a slim build and dark coloured hair. He was wearing the red handkerchief or bandanna over his lower face and a blue baseball cap, a blue windcheater jacket, blue jeans and white runners.

Any witnesses who may have seen the man featured in the CCTV footage or matching this general description in the area of the Ngunnawal shops around the time of the offence is urged to contact Crime Stoppers.

Looks like he’s wearing gloves as well. Any found in the vicinity?

@The_RiotACT @The_RiotACT
Police have released photos of three young men involved in a dangerous vehicle burnout recently, and are calling for witnesses https://t.co/aHs03hxBN1 (22 minutes ago)

@The_RiotACT @The_RiotACT
Thinking of buying or renovating: A blindsided Andrew Barr has taken aim at the one-size-fits all approach of the Federal Government's stimulus package for the housing sector, warning it is too generous and may jack up house prices https://t.co/XgVdOjnX0o (50 minutes ago)