Poor Brumbies slump to the Crusaders 23 to 30

Foxsports tells the tale of a Brumbies side that didn’t turn up to play in the first half.

A lacklustre performance from the Brumbies has seen them slump to their first home loss of the Super Rugby season, falling to their old foes the Crusaders 30-23 in Canberra.

The New Zealand heavyweights slowly ground their opponents down in front of 16,544 spectators at Canberra Stadium, their defence simply too strong and well prepared for the Brumbies wide gameplan.

The Brumbies failed to build momentum throughout the match, with poor handling, disrupted lineouts and scrum penalties being the main culprits.

The Crusaders encountered their own problems at the lineout, but still managed to dominate territory on the back of five-eighth Dan Carter’s boot.

If Scott Sio gets picked over Dan Palmer for the rest of the season I’ll be quite happy. 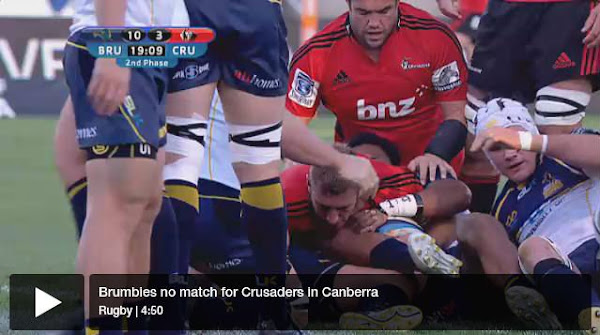 Did they swap prescriptions with the Raiders? 🙂

Why is it that Brumbies fans never shut up about the Raiders?

be interested to see the phase statistics. Very ordinary Brumbies

Put to the sword by Dan Carter. Craig Joubert should have binned George Smith in the 2nd half when Smith was standing offside with the Crusaders 5 metres out from the line – and refused to get onside despite three attempts by the ref to tell him where the onside line was. Cynical play Brumbies – it might have worked against the Reds in Brisbane with the same ref, but come finals time you’ll be in trouble with your cynical professional fouls. & you’ll need a Plan B – Plan A attack with width has been worked out by everyone else in the comp….

Did they swap prescriptions with the Raiders? 🙂

Jess Oh - 58 seconds ago
lol 1. It's called intersectionality, and Zoya understands it very well. 2. It's Aboriginal*. The term you used is outdated a... View
Rob Thomas - 18 minutes ago
I walked into the street, the on coming traffic was about to strike me, luckily I decided I'm physics blind. View
Richard Orchard - 30 minutes ago
So only white people can be racist right? It’s the white people who have to read this article, and repent I’m assuming? A... View
Community 3