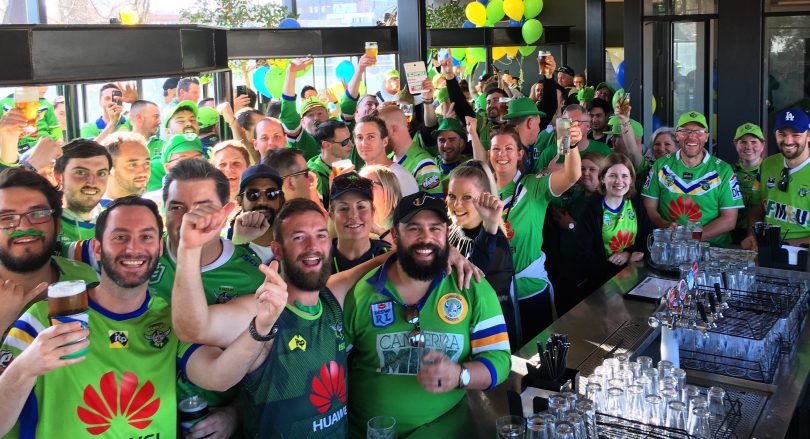 Canberra Raiders fans in full force at a hotel in Richmond for the semi-final against Melbourne two weeks ago. Photo: Greenhouse Facebook page.

While commenters are divided on the value of the ACT’s new laws making it legal to possess small amounts of cannabis, the RiotACT’s readers are firmly in favour of the change.

The ACT Legislative Assembly passed Labor backbencher Michael Pettersson’s bill, making individual possession of up to 50 grams of dry cannabis, 150 grams of fresh cannabis and two plants legal from 31 January 2020. Each household can grow a maximum of four plants.

Politicians have cast the legislation’s passage as a victory for the community and reformers.

But it remains a criminal offence to cultivate or possess cannabis under Commonwealth legislation, and ACT police can still apply Commonwealth law in certain circumstances, raising renewed concerns about the ACT’s ability to govern ourselves.

Under the Commonwealth criminal code, people caught with small amounts of cannabis could face a maximum $8,000 fine or up to two years’ jail.

Bearing police concerns in mind, we asked Are the ACT’s new cannabis laws necessary and useful?

Your voting options were Yes, this is a sensible step to normalise what was already happening. From a total of 535, this received 314 votes, a clear winner. The other option was No, police already use careful judgement, this is political, not practical. There were 221 votes for this choice.

This week, it’s all about the footy, although we’re asking which code has the city’s heart?

Canberra has had a stake in two grand finals this season, but as Lachlan Roberts argued this week, you’d be hard-pressed to see how the Giants have captured the city’s heart despite plenty of cash injections from the ACT Government.

While there are plenty of AFL fans in Canberra and the handful of Manuka matches are well attended each year, arguably most locals already follow a team and see the Giants based in Western Sydney as a firm second choice.

By contrast, the city was a sea of green for the Raiders’ grand final appearance on Sunday. Greens sausages, green beer, green buildings and green wigs were all the rage across Canberra and Queanbeyan as we probed the team’s capacity and even explored captain Jarrod Croker’s childhood.

But let’s not forget the Brumbies, who captured so many hearts back in the days when local boys like George Gregan, Stephen Larkham and Owen Finnegan carried all before them.

I don't know why, but I thought ACT had decided not to lock people up for small quantities of weed in the 90s. Drug prohibition is a complete waste of money and resources. Better off putting the money into harm minimisation.

chewy14 - 11 hours ago
Dolphin, The Greens will never be a realitisic alternative whilst they refuse to deal with reality when determining their pol... View
dolphin - 23 hours ago
its not hard jwinston, just look at the libs and you understand why. they are just too socially conservative for most of us.... View
HiddenDragon - 1 day ago
"....The question now is making it work and be accessible to as many Canberrans as possible..." No, Zed, the question is and... View
News 31

@The_RiotACT @The_RiotACT
Running seven marathons in seven states in seven days will be uncomfortable says Kaiti Penrose who is one of six runners in the region taking on the Bravehearts challenge to end childhood violence https://t.co/Briu2xeOMC (57 minutes ago)