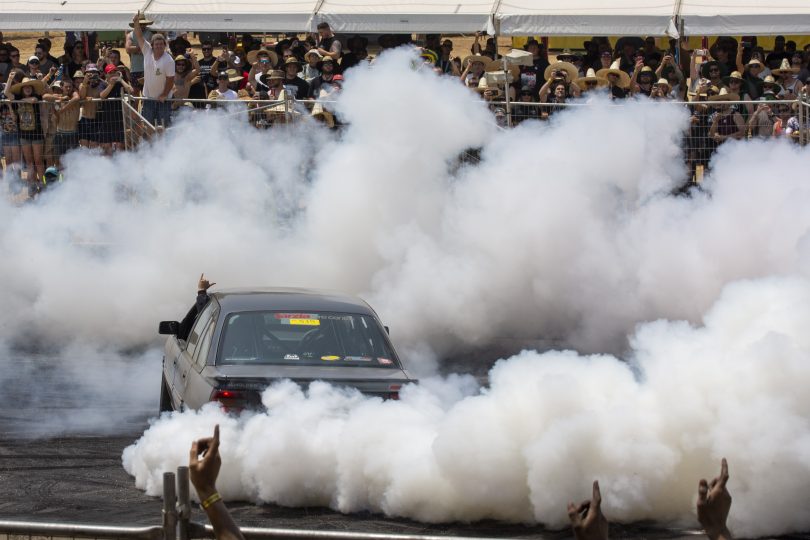 In the midst of the bushfire crisis, one of the other major stories of the season is undoubtedly Summernats.

Organisers’ decision to continue with their burnout competition on what turned out to be the hottest day Canberra has ever experienced remains controversial. In particular, it will be interesting to observe the repercussions after the Chief Minister made his thoughts on their decision abundantly clear.

There have also been some fascinating results after we polled you on the issue. A little context: most RiotACT polls attract between 500 and 1500 votes. We don’t pretend for a second that they are scientific, but it’s a good way to gauge what people care about in our very wide readership.

So we asked:  Should authorities have exercised their powers to cancel the Summernats burnout competition?

An all-time record 5,884 people voted. And from behind the scenes, we can tell you that almost 25,000 people read the accompanying poll article.

Opinions were certainly polarised in the comments.

Hilbilly said: “Forget it. If they are allowed to continue with burnouts on the hottest day in history with the whole surrounding area going up in flames and gleefully adding their acrid rubber smoke to the worst air quality in the world, then nothing can stop them. All they have to do is quote how much money they bring in to the ACT and everything caves.”

From Shane Bennett: “Definitely NO. The Summernats employ their own fire crew that are positioned all around the burnout ‘pad’ who react & respond immediately to any threat very promptly, no-one & nature are never in trouble. Taking Summernats from Canberra would be detrimental to the local economy. My only suggestion would be [to] ban the sale of alcohol before …say … 2-3 pm, that will eliminate most of the ‘dickhead’ behaviour.”

Maya123 smelt a rat: “One moment with the poll the ‘yes’ vote was leading, then all of a sudden the ‘no’ vote was leading. Makes me wonder if the results were screwed by say an email going out to Summernats attendees and asking them all to vote.”

Perish the thought! Incidentally, a warm welcome to any passionate motorsport fans who may have arrived at the site very recently, and thanks for engaging in the debate.

This week we’re asking about whether we should raise the age of criminal responsibility.

There is a national push underway to raise the age of criminal responsibility across Australia from 10 to 14, and ACT Human Rights Commissioner Helen Watchirs has weighed in, saying that is the international standard.

“We now have the evidence in relation to brain development for complex reasoning regarding consequences and impulse control, which is not developed until the age of 14 generally,” she said.

75 Responses to Probing the polls: Summernats supporters and the age of criminal responsibility
Filter
Show all comments
Showing only Website comments
Show only Facebook comments

Anyone who does not live in the Watson area should not make any comments on this as you have not experienced the noise and stench every year. When you do, then please comment.

Summernats should be kept because every year, without fail, it upsets the finger wagging wowsers. It is so enjoyable to see these elitist snobs squirm in their impotence. Let’s make Summernats a twice yearly event.

“….it will be interesting to observe the repercussions after the Chief Minister made his thoughts on their decision abundantly clear”

But not before the 2020 Territory election.

The people who hate Summernats are likely to be rusted-on Labor/Green voters anyway, but a fair chunk of Summernats supporters would be part of ACT Labor’s cashed-up bogan demographic who tend, as a matter of honour, to dislike Liberals even more than they dislike Labor’s PC poseurs – for some of them, cancelling Summernats could well be the last straw.