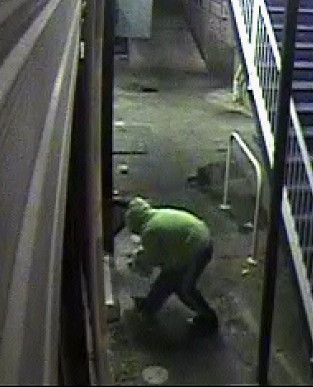 ACT Policing is releasing dramatic, previously unseen CCTV vision of an arson incident at a café in Weston earlier this year in the hope that public assistance may help identify the offender.

Exhaustive enquiries have been undertaken by police since the arson in March, with other lines of investigation so far failing to generate an arrest. The March fire was the second time the café had been targeted by arsonists within a two year period. The property was extensively damaged .

The offender’s face is not shown in the dramatic vision but police are hoping that there may be other physical clues, such as the offender’s clothing, build, posture, or mannerisms, which may help to generate Crime Stoppers reports.

Criminal Investigations Constable Callum Hughes said that the vision had been held back by police from public release until other avenues of enquiry were exhausted. Recent successes generated through the public release of imagery by ACT Policing through its popular Facebook page prompted detectives to release the material.

The vision shows the complete arson incident, from shortly after midnight on Wednesday, March 13 when the offender first enters the frame, to the smashing of the door panel with a hammer to gain access, the spreading of the accelerant, and the ignition of the accelerant,” Constable Hughes said.

“The offender is described as around 165cm (5’5”) tall, with a slight build and round shoulders, wearing a flourescent yellow hooded jumper, dark track pants with white vertical stripes, and white shoes. He is right-handed.”

“What we want is for the public to study the offender closely, check the time and date of the incident, and attempt to recall any suspicious activity, people or vehicles seen around the Cooleman Court shops around midnight on that date in March. That little bit of important information to Crime Stoppers could help us jump-start this case and identify this arsonist.”

Constable Hughes remained confident police could solve this case. He said the release of the CCTV, together with pictures of the café’s fire-damaged interior, may also encourage someone who knows what happened, or knows who was responsible, to finally salve their conscience with an anonymous call to Crime Stoppers.

“If anyone has information which can assist our investigation, we would urge them to contact Crime Stoppers on 1800 333 000, or report online to the Crime Stoppers website. If you wish, you may remain anonymous.”

Tom Adam - 2 hours ago
Why won’t they make it multi storey, instead of stealing parklands?? Not a wise investment.... View
Steve Herczeg - 6 hours ago
I've always wondered why there's a statue to celebrate single mothers at the top of the street. View
Bill Gemmell - 7 hours ago
Ashley Wright no worries. It is a morass to wade through. You made me look again as well. The definition of temporary is the... View
Motoring 14

John Brinsmead - 10 hours ago
wonder when we'll see a da for an 8 to 20 story building. View
Theresa Rand - 16 hours ago
Very sorry to read this article... my husband and I do not live in Weston but would make a trip to Weston to visit the booksh... View
Josh Devenny - 18 hours ago
Ada oh noooo 😪😪😪😪😪 View
News 12

@The_RiotACT @The_RiotACT
Geocon has paid $24 million for a large city site near the Canberra Olympic Pool that it plans to develop into a mixed-use residential precinct https://t.co/zEhXCW7LBF (19 minutes ago)