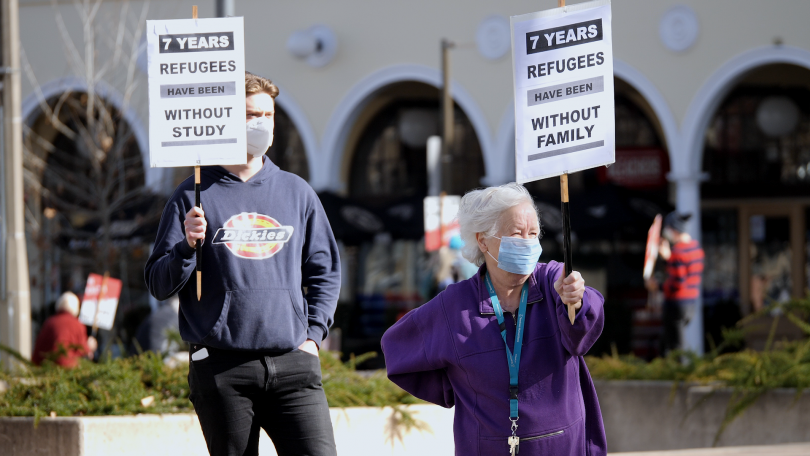 Seven years to the day that former Prime Minister Kevin Rudd announced no asylum seeker arriving by boat would be settled in Australia, protestors took to the streets around Australia to demand the release of hundreds of asylum seekers and refugees from detention.

Around 100 people lined Canberra’s Northbourne Avenue from London Circuit on Sunday (19 July) calling on the Morrison Government to end its offshore detention practices and settle asylum seekers and refugees in Australia.

Wearing masks and following appropriate social distancing practices, around 100 people stood in silence along Northbourne Avenue last Sunday in support of an end to indefinite offshore detention of refugees and asylum seekers.

“We are really concerned about the rapidly deteriorating mental health of the refugees,” said Dr John Minns, an Associate Professor in Politics and International Relations at ANU and refugee advocate with the Refugee Action Council (RAC).

“The Government has no plan or timeline to get these people out of detention or address the situation. The average jail time for a rapist in Australian is four years, whereas these people have been locked up for seven years with no charge.

“People have been brought here under the Medevac legislation for medical treatment and are being locked up in extremely cramped facilities – they have not even been able to exercise.” 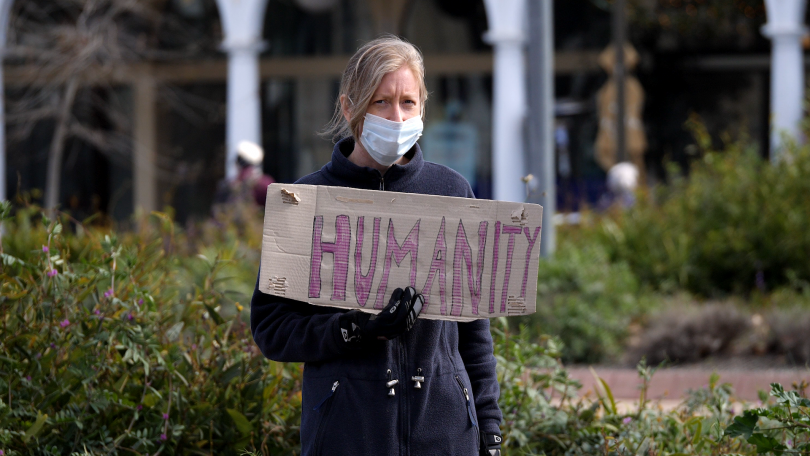 Just two days after the protest, two asylum seekers in a Queensland detention facility attempted to take their own life and were transferred to a Brisbane hospital.

Australian Border Force was named as their next of kin, according to RAC.

Photos of the centre show single beds a metre apart from each other – a concern during the pandemic, Dr Minns said, as well as inadequate distancing measures and burnt food.

“The obvious and urgent thing that needs to be done is social distancing,” Dr Minns said. “People are being brought here for medical treatment and are being kept in extremely cramped facilities.

“It is important to make clear that our campaign has not died during COVID-19 … we need to make sure we go back to fundamentally humanitarian principles of how a civilised country should operate.” 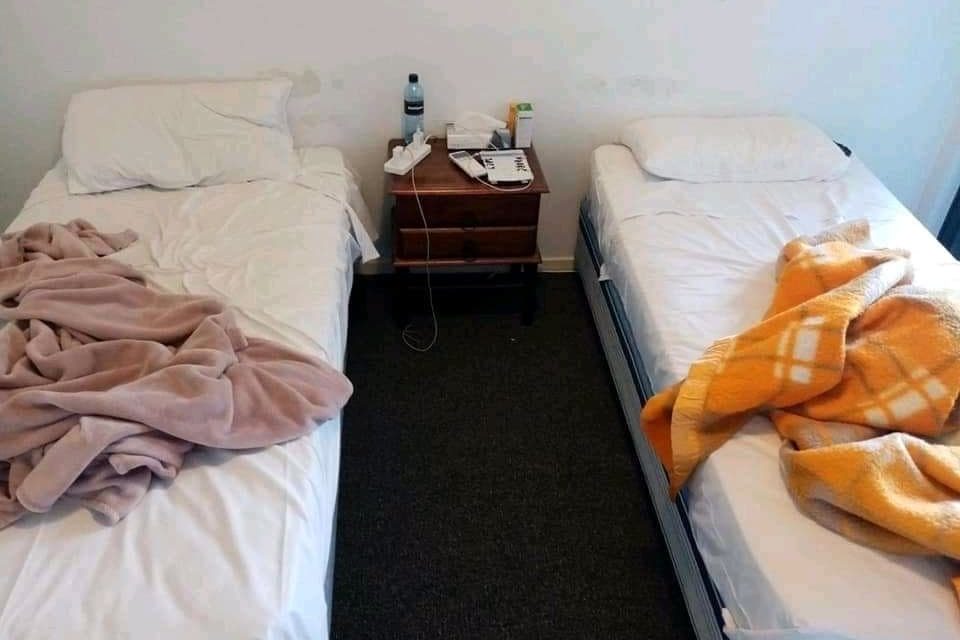 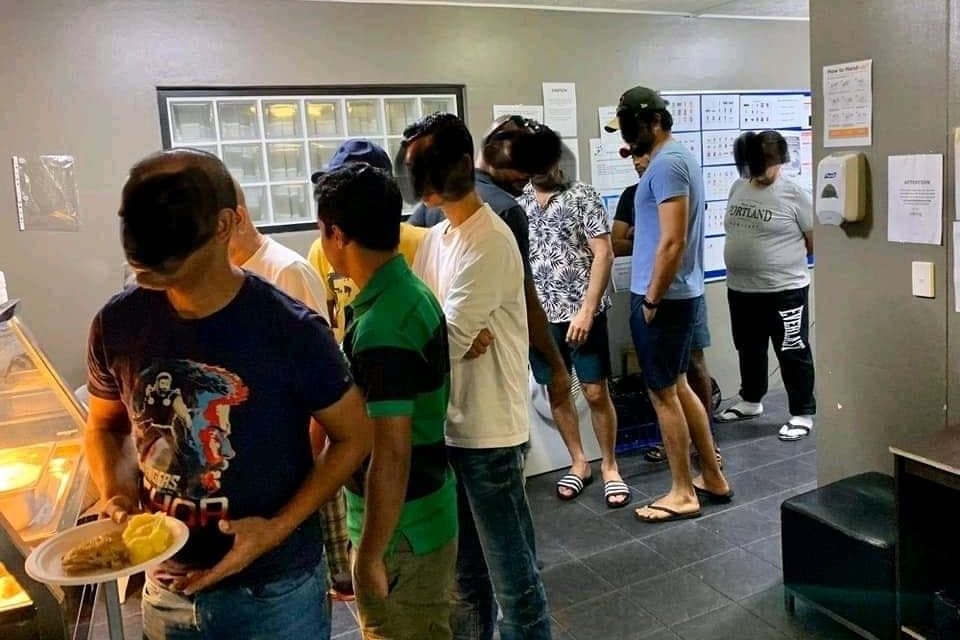 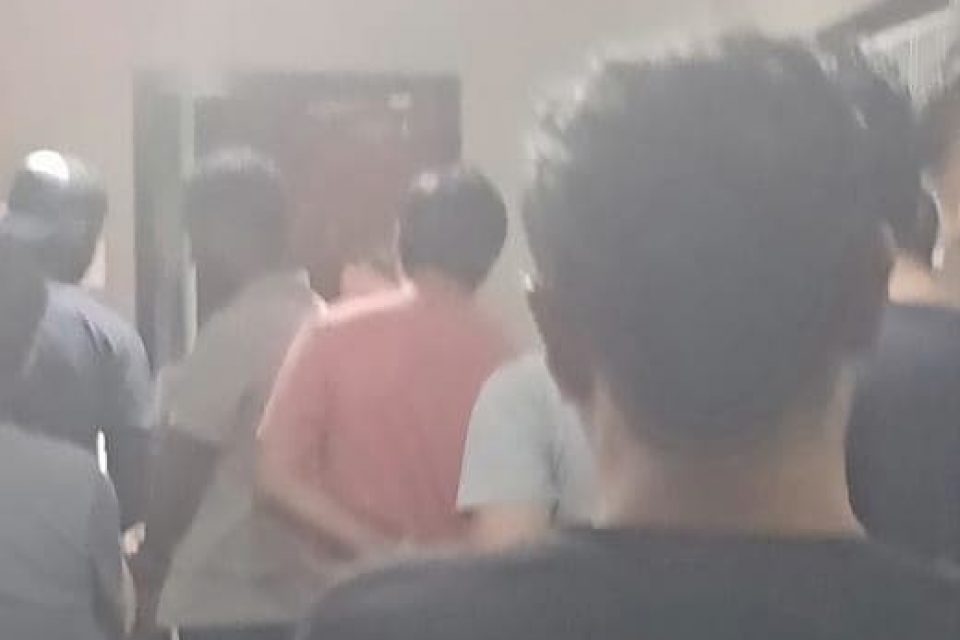 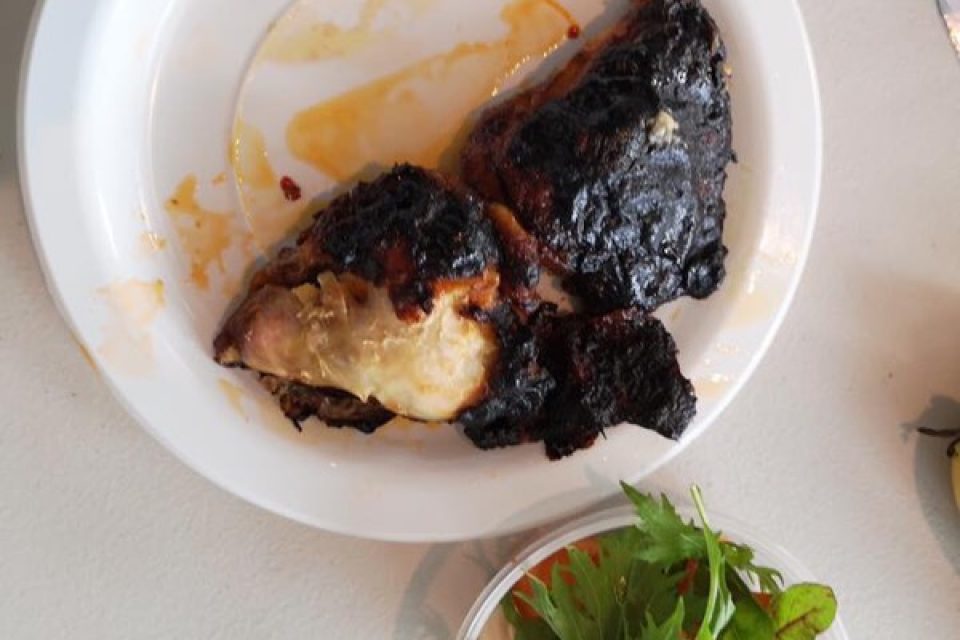 Dr Minns and the RAC would like to see a return to onshore processing of asylum seeker applications and an end to mandatory detention.

“We are not saying everyone who claims asylum should get in, but people have already been assessed to be refugees,” he said.

“We are only advocating for measures that we already had in the past, such as with the Indo-Chinese crisis in the 1970s and 80s.”

More than 400 refugees and asylum seekers continue to remain in offshore detention in Papua New Guinea and Nauru, while an extra 120 people remain confined in hotels after being brought to Australia, often for medical treatment. Thirteen deaths have been attributed to Australia’s offshore detention regime, Refugee Advice and Casework Service (RACS) said.

The protest did not have any speakers because of COVID-19, which also limited the attendance to 100 people who registered with the campaign in line with ACT Government safety requirements. Social distancing practices were put in place and people without masks had them provided at the protest. 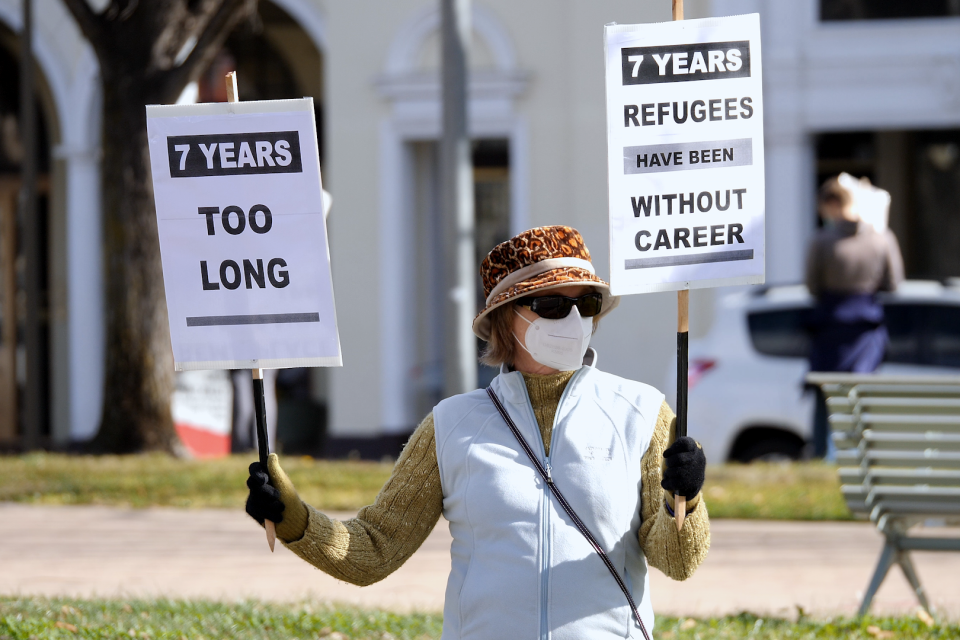 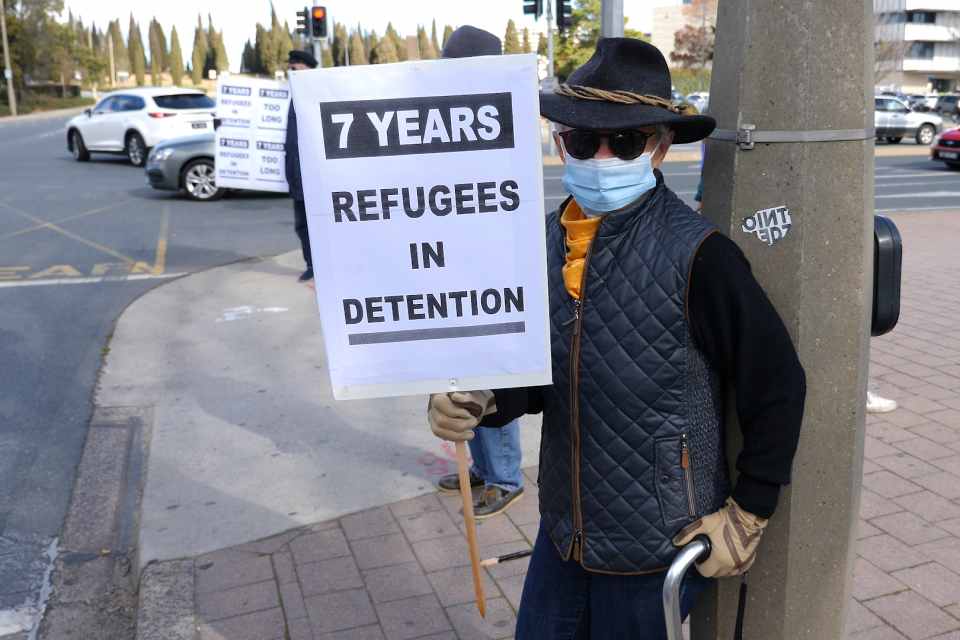 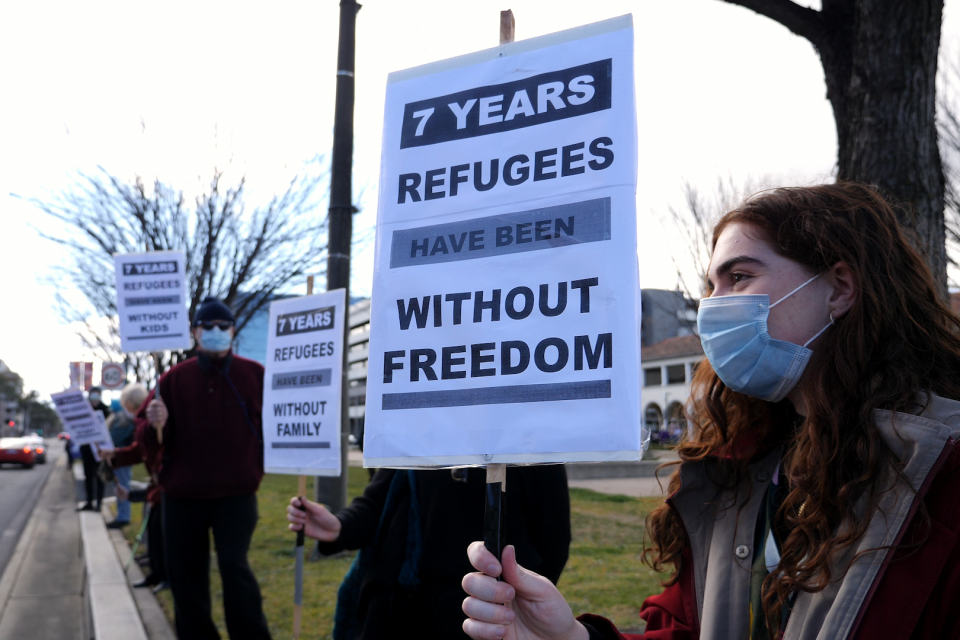 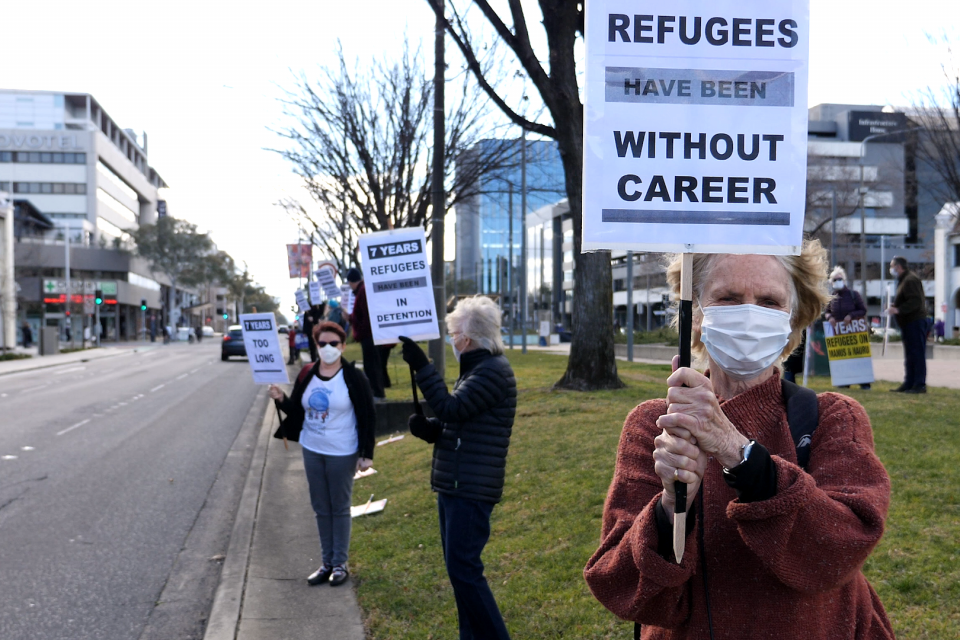 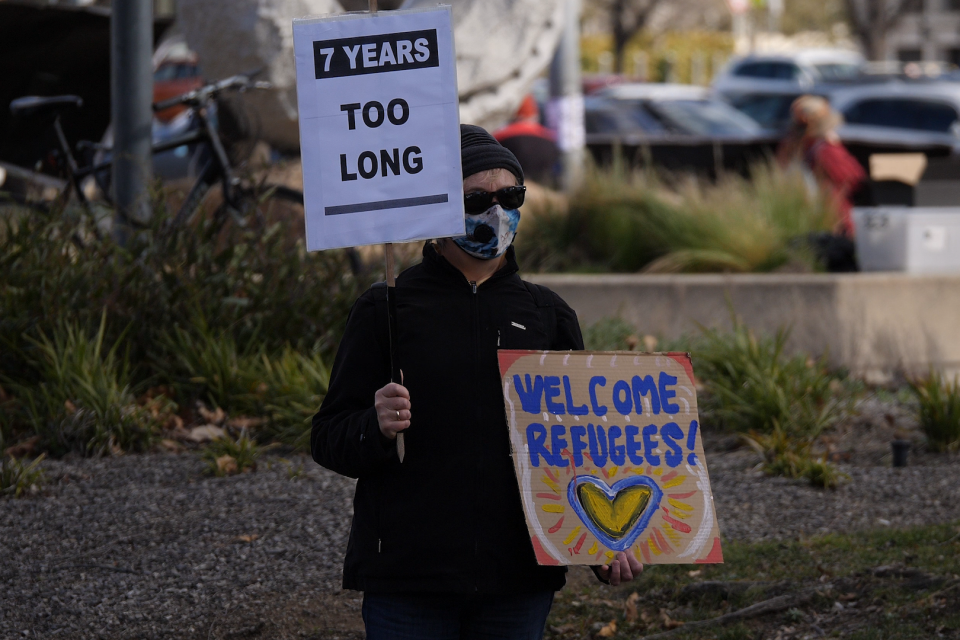 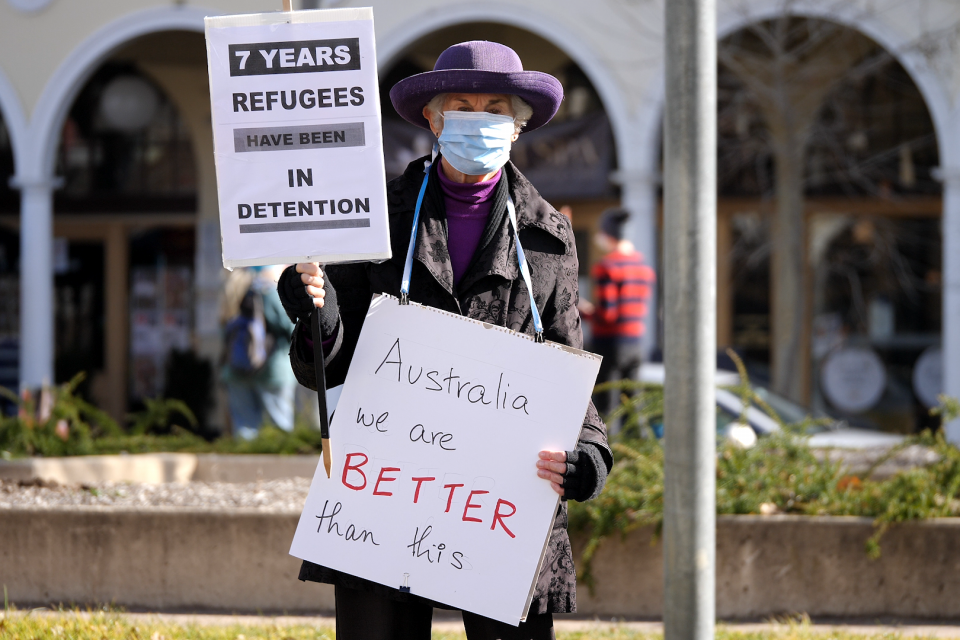 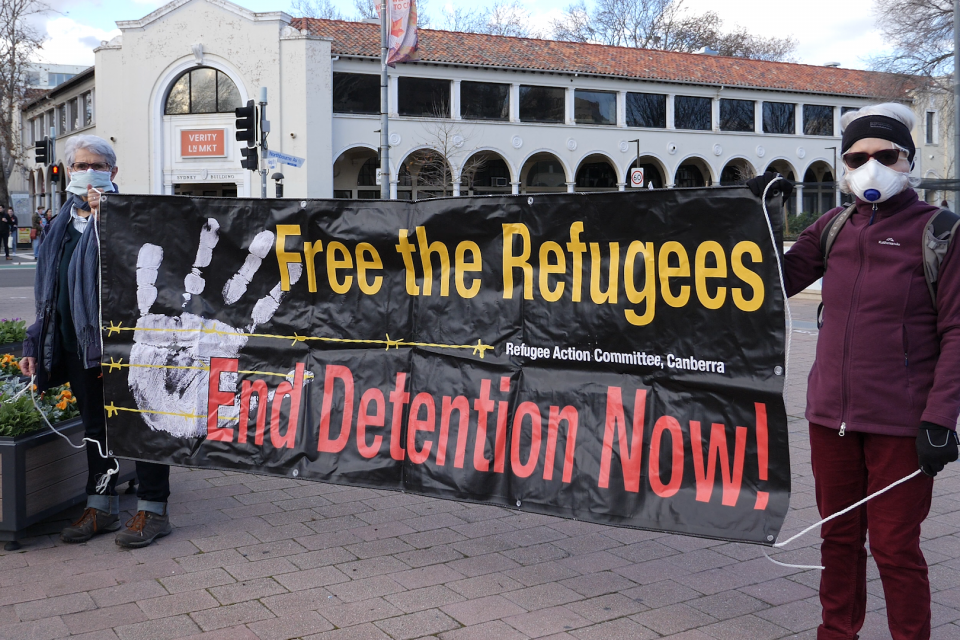 Why are people smugglers charged with the crime (if indeed they are caught) but their co-conspirators in the crime (entering a country illegally) are usually granted asylum?

An issue with asylum seekers that arrived by boat is that their documents had been destroyed en route by boat from Indonesia after arriving in Indonesia by plane. Asylum seekers by boat had been granted refugee status on the basis of benefit of the doubt clauses from the UN refugee guidebook based on the post-WW2 refugee crisis. The only 2 people of the boat cohort that did not destroy their documents were Luke Mogelson, Joel Van Houdt, undercover journalists from the New York Times, who were not detained and were free to proceed from Christmas Island, despite arriving irregularly and unauthorised.

Stupid protests in the middle of a pandemic is why Victoria is in its current state.

These people simply don’t get that they’ve lost the argument on offshore processing, because it clearly works.

Australia’s refugee resettlement program needs to prioritise those who are most in need of assistance and that simply can’t be achieved through any program that allows onshore processing.

If you give preference to those with the means and money to get here over those most in need, you’ve already failed.

As I understand, they are not “locked up” and they can return to the country they left at anytime at Australia’s expense. Those who a have been granted refugee status can accept re-settlement in other countries. They have lots of choices but they appear to insist that they will only accept re-settlement in Australia and they are egged on by supporters such as the ones featured in this article. If “burnt food” is a problem I am sure that can be managed by turning down the heat.