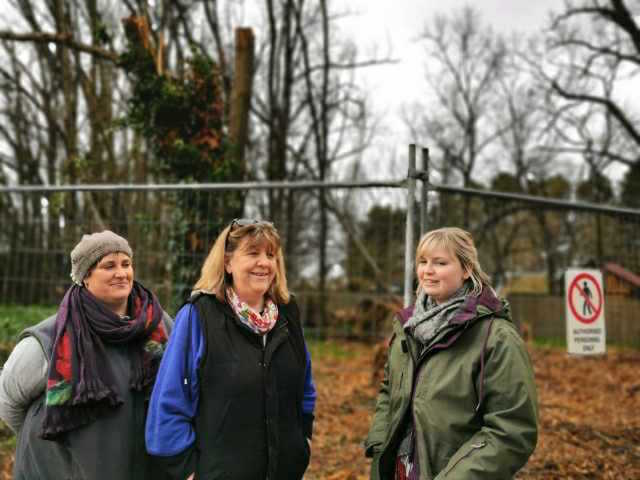 Bungendore residents Emily Nicoll, Kerry Doutch and Rachel Putt in front of the area where the trees are being demolished. Photo: Supplied.

A group of angry residents from the Bungendore community have formed a barricade to prevent the removal of a stand of elm trees being cleared to make way for a multi-million dollar sports hub in the town.

About 12 residents formed the barricade on Wednesday morning (12 August) before taking their protest to the Queanbeyan-Palerang Regional Council (QPRC) chambers at Queanbeyan.

Heavy plant machinery has already removed a number of smaller elm trees on an existing public road between the Old Stone House Bed and Breakfast and rural supplier Cleanseeds on the corner of the Kings Highway intersection at Bungendore.

Many residents of the town have claimed that QPRC has failed to consult with them over the removal of the trees; however, the proposal for the $2.4 million sports hub has been presented to the community as part of the Bungendore Structure Plan.

QPRC needs to acquire the land to begin building the sports hub. A development application was lodged earlier this week.

Resident Judith Turley told Region Media they are hoping to receive a response from the NSW Office of Environment and Heritage to prevent additional trees being removed from land owned by the NSW Government. 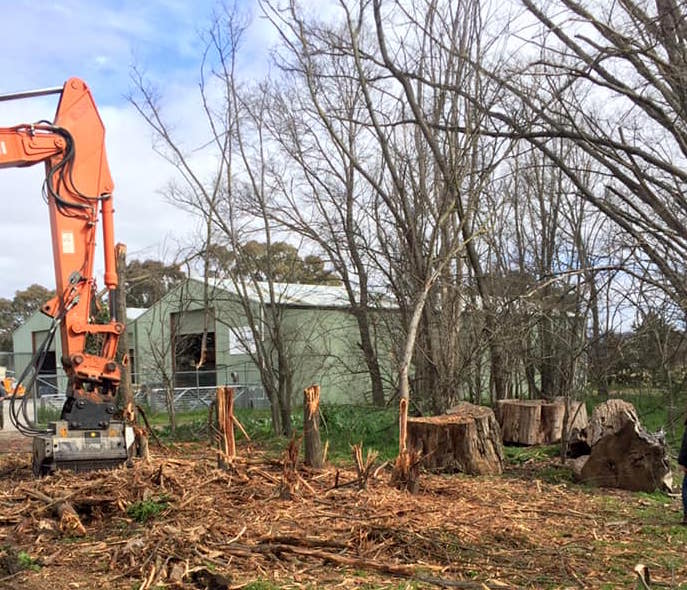 A number of trees have already been removed on the site between the Old Stone House and Cleanseeds in Bungendore. Photo: Supplied.

“It’s all about the legality of what they [QPRC] are doing,” Ms Turley said.

“Our point is to ask why would you cut down any trees now after the bushfires and everything? Why would you be removing trees if you don’t have to?”

The owner of the Old Stone House Bed and Breakfast, Debbie Putt, said the actions of residents had already stopped a number of trees from being removed.

“This is wrong on so many levels. If we hadn’t have stopped this, the 140-year-old elms would be gone by this afternoon,” Ms Putt wrote on the Bungendore Community Noticeboard.

“We have been through enough with fires and a pandemic and flooding on the weekend. Just trying to run a business here and retain some of the beautiful heritage aspects of our amazing village.

“There has been no community consultation – zip, zilch, nothing.”

However, a QPRC spokesperson said that an arborist’s report recommended the removal of the trees.

“While the development application cannot be released until Council has title to the land, there are some early works that Council is able to undertake without development consent. This includes some vegetation clearing on the road reserve in Malbon St to allow the installation of a new water main and for construction traffic during the development of the sports hub,” the QPRC spokesperson said.

“The vegetation clearing will not result in any of the ‘veteran’ elm trees being removed. The contractors have been engaged to remove ‘suckers’ that have grown from the original trees and to remove some of the dead limbs on the mature elm trees.

“These works will improve the health of the mature elm trees. Some of the suckers may look to be mature trees; however, an arborist’s report has confirmed they are suckers and recommended their removal.”

QPRC said an environmental impact statement was not required for these works as all the suckers, regardless of size, are within this road corridor owned by Council.

“An arborist’s report was carried out to assess and protect all the mature trees in the vicinity of the proposed roundabout and the Stone House and these will be protected,” the QPRC spokesperson said.

The arborist’s report is available on the QPRC website.

The development will see Malbon St serviced by a new roundabout. 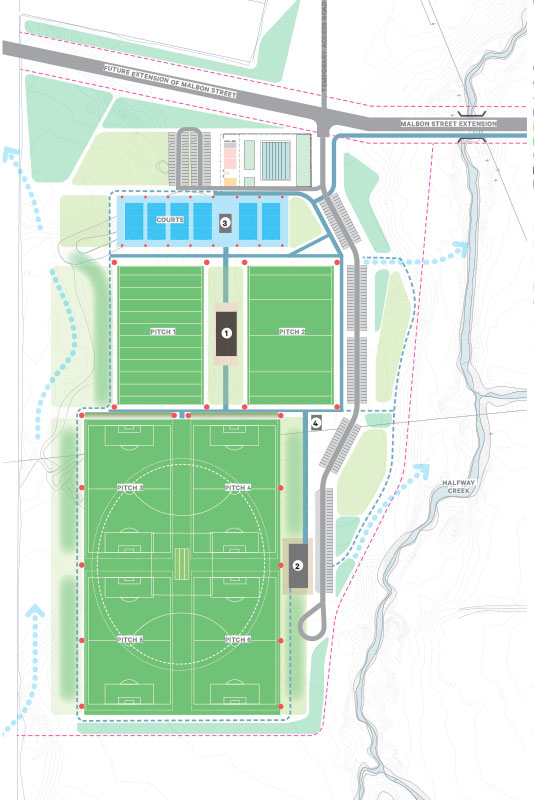 The plan for the Bungendore Sports Hub. Image: Supplied.

The DA is under assessment until the acquisition of land is complete, which is expected to be complete by the end of August.

A tender for the final design and construction, along with bulk earthworks will be determined at a Council meeting on 26 August, meaning construction will begin shortly.

Council is hoping to have the two main sporting fields ready for the winter 2022 season. The hard courts will be available sooner.

The project is being funded by grants from the NSW Government.

Bungendore is 30 mins or less from Canberra. Can someone tell me why Bungendore needs a multimillion dollar sports centre

Are these same people damanding a high school and other council spending in the community?