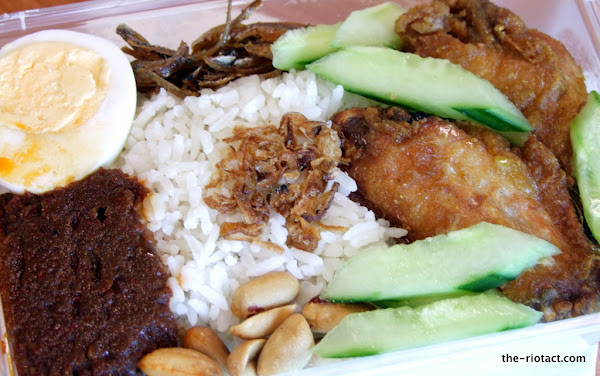 Joining the long line of businesses investing their hopes and dreams into the windblown sterility of Civic West is the imaginatively named “Roti House“.

Like almost all of these restaurants it is tastefully appointed to the point of being forbidding and filled with large numbers of staff surprised by the appearance of a customer.

But they have a little blackboard out the front offering a $8.50 lunch box and so fell within the scope of our reviews.

The boxes are pre-made and sitting in a warmer by the door which appears to be keeping the food in the absolute optimum zone for bacteria growth.

The box is heavy on rice. Really the meal is a big pile of rice with some bits, and two chicken wings.

The chicken wings at first glance could belong in a KFC, but upon closer inspection were curried, and really quite good.

And then the rice. This rice is great!

Coconut milk has been heavily involved in its production, and the bits of cucumber, dried fish, peanuts and curry paste combine with it quite dazzlingly.

It’s something a bit different from other fare on offer at lunchtime in Civic and I enjoyed thoroughly.

(For more $10 lunches in Civic check the tag)

i like the lunchbox here. Also came here with my work mates and had the banquet. lots good malaysian food. good value . like this place a lot

My office and I went to check it out when it first opened. We ordered off the menu because this was before they introduced the $8.50 lunch boxes. I must say we were all a bit underwhelmed. I ordered takeaway and despite waiting for them to make it for me, when I got back to the office I found the food was lukewarm (!) And I just work about 100 metres away.

Other coworkers found the food a touch greasy. Based on our experience I don’t think we’ll be back.

do they have a non peanut option?

Johnboy, have you been to check out the Indian place on Childers Street called Dehli6? They do a lunch option for $9. Not bad really.

i prefer the ramen place next door

Have they got a sub $10 lunch option?

i prefer the ramen place next door

City west sterile? Why I take great offence. I have spent many a windblown lunch hour in that most bustling hub of non-activity.

Great place, not much joy for vegos. Delicious roti with three vego curries – all the same dahl.

? love the takeaway lunch box, only one selection but nasi lemak with the fried chick wings were delicious! Very good value at $8.50, am a happy returning customer. Also think the restaurant has only started this lunch deal very recently so they don’t usually pack a lot of boxes in the warmer to ensure that the food is fresh.

Roti canai doesn’t involve a great big dog does it?

I’m reviewing what it says on the menu, but thanks for the info!

The comment about bacteria growth is apt. Bacillus cereus growth on rice is known, but more care is required with nasi lemak. The added coconut milk (santan) makes unrefrigerated rice go bad even faster.
Doesn’t make it a hazardous dish to eat (this is a common dish in the tropics), just need to be aware during preparation or before selling. Especially as summer approaches.

I’m reviewing what it says on the menu, but thanks for the info!

The dish is (one of the variants of) nasi lemak.

“Lemak” refers to oily/fat (as in fat for cooking), referring to the coconut milk. Nasi is rice.

Just a thought, since you are essentially reviewing nasi lemak without the name.

First it was Riot Arts and Crafts Woden Plaza, now Roti House. JB I think you should take a trip to the patents office.

Also “Like almost all of these restaurants it is tastefully appointed to the point of being forbidding and filled with large numbers of staff surprised by the appearance of a customer.”

Maybe for lunch, but for dinner it’s really packed.

Chris Kubank - 17 hours ago
Lauren Ogden well said View
Randy Goldberg - 23 hours ago
Domenic Fabbo three to six months or more. Basically, it'll be in place (if not stronger measures) until there is a working v... View
Lauren Ogden - 1 day ago
It is a shame that these stories are provoking aggressive reactions when we could be working together as a community. "One st... View
News 18