UPDATE – 11:00 am: A 40-year-old man has died following a single-vehicle accident on Uriarra Road this morning (22 September).

The man crashed into a tree shortly before 7:40 am while travelling towards Canberra.

Police and emergency services closed the road between Uriarra village and Denman Prospect and police are expected to be in attendance for a number of hours.

ACT Policing’s Superintendent Corey Heldon said paramedics from ACT Ambulance Service tried to revive the man, but he was pronounced dead at the scene.

Supt Heldon said driving conditions were good at the time of the accident, despite a torrential storm in the area last night.

“Uriarra road remains blocked at both ends and we’re in the process of investigating the circumstances of the accident,” Supt Heldon said.

“The vehicle collided with a tree and as a result, a male person has passed away.

“We have spoken to a couple of people, but as far as we’re aware, no one actually saw the accident.”

Supt Heldon said police are also in the process of notifying the man’s next of kin.

Motorists can expect lengthy delays and are being urged to avoid the area.

ACT Policing’s Major Collision Team is investigating the circumstances of the incident and a report will be prepared for the ACT Coroner before further details of the accident can be released.

Supt Heldon also said the accident is a timely reminder for motorists to be safe on the roads ahead of the school holidays and fewer restrictions on travelling due to the COVID-19 pandemic.

“Obviously, there’s going to be a lot more people on the roads, so this is also a timely reminder to be safe on the road, take your time, make a plan and arrive safely,” she said.

The man is the fifth person to die on ACT roads this year. 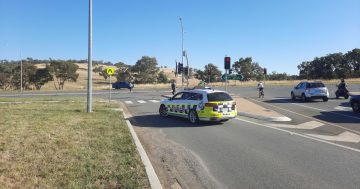