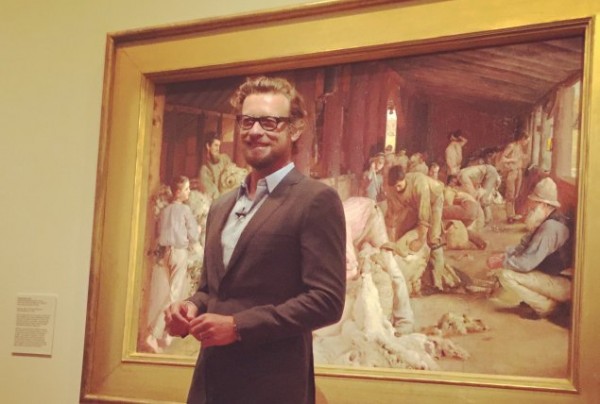 Star of The Mentalist Simon Baker is the new ambassador for National Gallery of Australia, and his presence has already attracted some big national media coverage for the gallery’s summer blockbuster exhibition Tom Roberts, which opens on Friday.

As RiotACT left the media preview at the gallery this morning, Today Show entertainment reporter Richard Wilkins was heading in to interview 46-year-old Baker, who was in demand as journalists queued up for one-on-ones with him during the press event.

Star-struck Canberrans hoping to catch a glimpse of the actor or score an autograph today or tomorrow could try hanging around the gallery or perhaps in the New Acton precinct given Hotel Hotel is the accommodation partner for the exhibition, though given his reaction to a question directly about our city, his stay may be a short one.

Asked what he likes about the national capital, he swiftly responded, “It’s not far from Sydney, it’s a very pleasant drive,” inspiring giggling around the room.

His more thoughtful response made amends, though.

“What’s interesting about Canberra is that you have the National Film & Sound Archive here, you’ve got the NGA here, you’ve made your city an arts and culture hub of the country,” he said.

Baker is a television megastar in Europe and the US, where his 2010 deal for the final seasons of The Mentalist was a reported $US30 million. He has starred in more than 20 films, including The Devil Wears Prada and LA Confidential. Nicole Kidman and Naomi Watts are godmothers to his children (with wife of 17 years Rebecca Rigg), and Baker is currently producing, directing and starring in the film adaptation of Tim Winton novel Breath. He was honoured with a star on the Hollywood Walk of Fame in 2013.

The actor had spent two and a half hours exploring the national collection and taking in the exhibition last night and was looking forward to seeing more. The Tom Roberts show in particular resonated for him because of his rural upbringing.

“What thrills me about Tom Roberts is that his landscapes and the way he captured Australian life feels so familiar. You can almost hear the sounds that you’re accustomed to when you’re in that environment,” he said.

“The exhibition is incredible, a must see for every Australian.”

Baker grew up in Ballina, NSW and said his first visit to an art gallery was in the city, Brisbane, on a school excursion. He said that connection and experience had stayed with him throughout his life.

“I’m a lover of art, it speaks to me, it inspires me in different ways,” he said.

“Just the time to spend wandering through a gallery and taking in the works and creating your own narrative or understanding and learning what the narrative of an artist’s process is, or each story within the picture, fills people full of stuff.”

A gallery spokesperson told RiotACT that the arrangement with Baker had come about after they learnt through their marketing company that the actor was currently based in Sydney and passionate about art. The ambassadorship is initially focused on the Tom Roberts exhibition but could continue beyond it.

Tom Roberts is open to the public from December 4 till March 28, 2016. Tickets are available now through Ticketek.

Michael Drew - 6 minutes ago
This may be problematic from an insurance perspective especially if lifelong head injuries were sustained in an accident with... View
Edna Brooke Jessop - 1 hour ago
Actually Gareth, being pregnant doesn't mean you are above the law, you need a medical certificate to not get fined. View
Morris Reinbear - 1 hour ago
That'd be other Australians except those in Victoria, Western Australia, South Australia snd Queensland. Silly sausage!... View
News 47