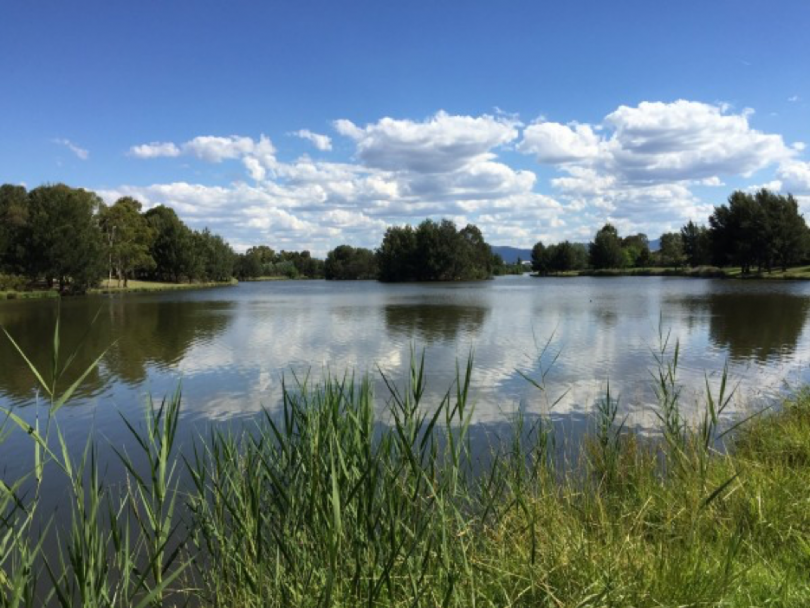 Cooler conditions during summer have led to lots of green grass like this at Lake Tuggeranong. Photo: File.

Canberra has had its coolest summer since 2011-12, and if you are hoping for some heat you’ll be disappointed as the milder-than-usual temperatures are set to continue into autumn, with the Bureau of Meteorology’s Autumn Climate Outlook forecasting more mild conditions in the Canberra region.

It will come as news to no one that the summer of 2020-21 was one of the wettest and coolest in Australia, marked by above-average rainfall and temperatures well below the previous summer’s extremes.

In Australia, the 2020-21 summer was the wettest since 2016-17, with below-average rainfall only in greater south-eastern Queensland from the New South Wales border to the Capricornia region.

December 2020 was the third wettest December since national records began in 1900, while Australian summer temperatures are on track to be the lowest since 2011-2012, with temperatures above average only for parts of Queensland and the west coast of Western Australia.

In the ACT and surrounding region, temperatures were near to or below average, while rainfall was near to above average for all three months of summer.

There were regular thunderstorms that led to localised flash flooding. The most widespread storms were on the evening of 1 February when Tuggeranong received 18 mm of rain in 12 minutes.

The Autumn Climate Outlook shows warmer days are likely only in the northern parts of Australia, Tasmania and the west coast of Western Australia. However, parts of New South Wales may have cooler than average autumn days.

Autumn nights are likely to be warmer than average across large parts of the country. 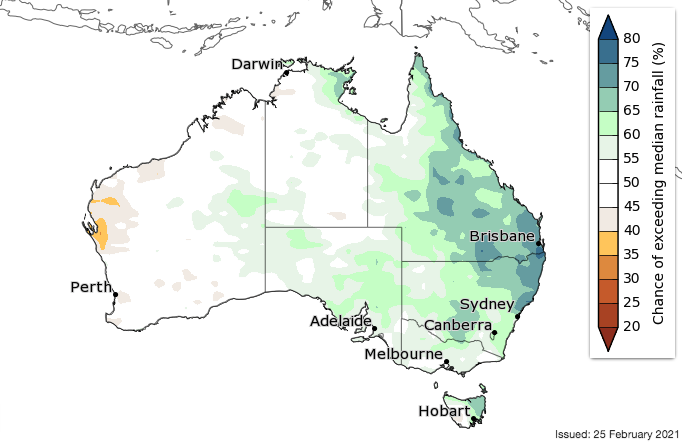 The BOM’s forecast for above-average rainfall for autumn. Image: Bureau of Meteorology.

The Bureau’s climatologist Dr Naomi Benger said while current observations and forecasts show La Niña has passed its peak, its effects on the Australian climate are likely to persist.

“The tropical Pacific Ocean is forecast to return to neutral conditions (neither El Niño nor La Niña) during autumn, consistent with the typical lifecycle of La Niña events,” Dr Benger said.

“However, it is not uncommon for the effects of La Niña to still be felt as the event declines. That means an increased chance of above-average rainfall, particularly for eastern regions.”

The severe weather season, from November to April, has so far seen four tropical cyclones in the Australian region, with one (ex-Tropical Cyclone Imogen) making landfall in the Queensland Gulf Country.

There have also been several significant tropical lows that brought heavy rain and some flooding to parts of northern Australia.

Given we were told last year’s hot, summer weather was the new norm, does this mean this year’s coolest summer in 10 years should be classed as extreme weather?

Good point. And how will the solar farms produce electricity when it’s going to be raining for the next 6 months?

Amanda McLean this looks like one of your beautiful water paintings.

There’s worse things going on in the world right now, I think we’re all very lucky and should count our blessings! No one can change the weather!

Kimberley Kim Kim yes it’s waiting for me to return 😎

I’ve loved this much cooler Summer. Suits me perfectly.

So glad we didn’t have the horrific fires like last year, I’ll happily accept a cool summer in return for not having to evacuate the farm and have friends lose all their belongings and properties damaged (not to mention the deaths).

I am looking forward to a real cold winter