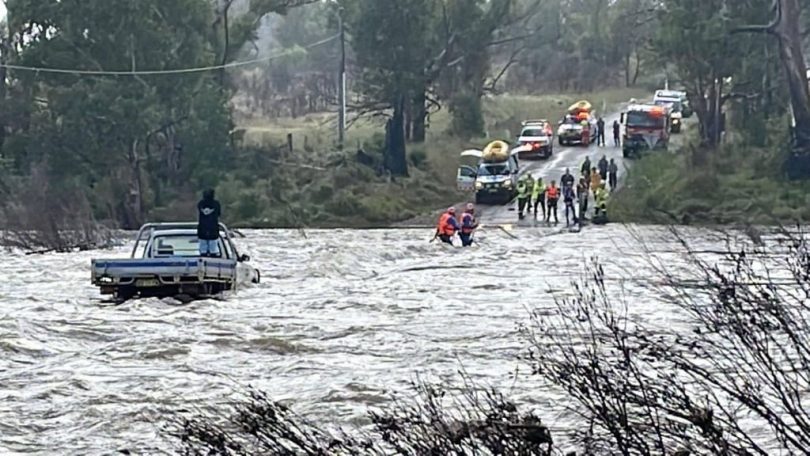 The SES is reminding people to avoid travelling through floodwaters after a person had to be rescued on the Bombay Bridge on Friday (4 March). Photo: Monaro Police District.

The Bureau of Meteorology has issued yet another severe weather warning, with more heavy rainfall and damaging winds expected to sweep through parts of the Capital region in coming days.

The ACT, South Coast, Southern Tablelands, and Snowy Mountains all feature in the weather warning, however the South Coast remains the central area of concern after consistent heavy rain over the past week.

On Tuesday, 8 March, the region could experience wind gusts of up to 90km an hour. Senior forecaster at the BOM Jordan Notara said the wind is expected to accompany a low pressure system and the current warning for heavy rain could be upgraded to life-threatening or intense.

“That’s what we’ve seen being produced in other parts of the state from these events, that’s enough to basically pull people off their feet if flash flooding occurs and it could again be quite a serious question that people need to be across as we head into tomorrow,” he said.

“The coastal nature of that low produces basically a real strong squeeze across the coastal region and that squeeze is creating the risk of strong winds.”

With much of the region already saturated, the combination of rain and strong winds will increase the risk of trees and powerlines falling.

While last week’s South Coast rain event may not have been as bad as first predicted, consistent rain has continued all week. The BOM expects a “sharp intensity change” in the rain that is coming.

“There is a significant risk of quite heavy rain that may produce widespread flash flooding across the region and there is also a chance that we could see rainfall totals reaching 200 mm across the South Coast,” Mr Notara said.

“(There’s) not so much as we head towards to the ACT but on those coastal areas and where that low is going to form, there is a risk that we could see some quite significant rainfall.”

As for the ACT, the worst weather is expected in the areas with a higher topography, generally further away from central Canberra. Up to 20 mm is predicted for Canberra, but that could increase should the damaging winds reach the ACT.

The ACT Emergency Services Agency today, 7 March, reminded the community to prepare their homes for storms. They recommend homeowners clean gutters, move cars under cover or away from trees, secure loose items around the house, avoid travelling through floodwaters, and keep at least eight metres away from powerlines should they fall.