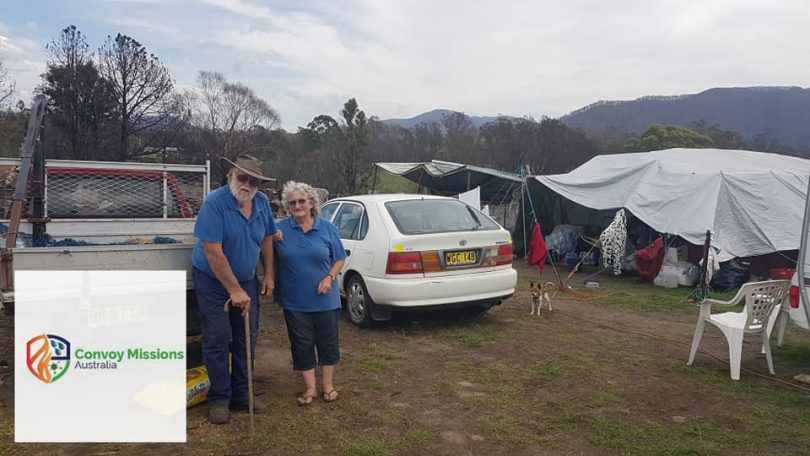 Jim and Enid at their Verona property, where they are living in a tent after they lost their house to fire. Photo: Andrew Trieu.

Although the South Coast is green again, a way forward is still unclear for many victims of fire as the organisations on the frontline are seeing.

John Oddie is new to his position with Convoy Missions Australia but says it all feels strangely familiar.

“I had no idea who Convoy Missions were until just before Christmas but the work I’ve been doing with them helping bushfire victims is similar to some of my 35 years of experience in the Army,” he says.

“I’ve seen some darkness and the people I’ve met over the last few months have the same look in their eyes as my mates that have survived battle.”

Convoy Missions was founded by Sydneysiders Andrew Trieu and Sarah Coye in response to the unprecedented bushfires.

“We’re a social enterprise of volunteers supported by community and industry donations, we don’t handle any financial donations, we just connect people who want to give with those who need help,” says Andrew.

Last week, Andrew came across John and Enid who had just moved into a caravan on their Verona property and have no power or running water. He says they are not the only ones in this situation.

Organising permanent housing for bushfire victims is a key priority of Convoy Missions and they have already supplied three-bedroom manufactured homes to those who want to live on their own land. The homes can be ordered, made and shipped within a week for about $70,000.

John is adamant that there is no time to waste in helping those who are still living in limbo after the fires.

“Losing a house is losing everything that constitutes life, a home is what nurtures your life and without that, people are losing hope. Without hope, all you have is despair.”

John says there’s no mistaking that the seventeen suicides on the South Coast since the fires are linked to feelings of despair, which can be prevented by helping people forge hopeful, permanent post-fire lives, including housing.

Marie Winchester lost her Cobargo home on New Year’s Eve and has been staying with friends in Bermagui with her partner and three kids ever since.

The family have just signed a 12-month lease on a house in Bermagui and she says the relief is tremendous.

“It’s so great to be in our own home again! Just knowing we don’t have to leave anytime soon, the first night I spent here I lay in bed and felt waves of relief.”

Many victims of the fires are uninsured or underinsured and John says that it’s time to front up to the fact that many people who were affected by fire lived on the outskirts of town or remotely in the bush.

“And they live there for a reason, because it’s cheap – whether they chose to live there or were priced out of other areas doesn’t matter, the fact is that they often don’t have the capacity to make a lot of money quickly.”

John sees a downward cycle begin, kicked off by the loss of a home to fire.

“We’re seeing so many people whose land was never assessed for bushfire safety before the fires and now they are looking at greater expense to rebuild, so they are in temporary accommodation, which is not insurable and therefore not tradeable, so the bank says their place has no value and eventually, they’ll be foreclosed.”

Bermagui real estate agent Julie Rutherford says that the rush of placing people after the fires has subsided but she expects another rush soon as those living in temporary accommodation on their land start to feel the cold.

“Just after the fires, we put the word out to anyone who owned a home in the area to ask if they would consider renting and we had a great response and ended up connecting 24 households with housing,” Julie says.

But the fires have put additional pressure on a local housing market that was already stretched, according to Julie.

“Supply was already low and demand high, especially for properties under $600,000.”

After waiting three months for a rental property to become available, Marie and her family aren’t wasting any time getting settled, planting a garden already.

“To be able to process the trauma we’ve all gone through as a family within the comforts of our own home, to be able to cry if need be … I can’t tell you how important that is.”