I wandered around the Canberra Centre not long after it reopened at 11 o’clock this morning. I was told there are about two dozen shops still closed, and it looked like most of those were on the top floor. The wost damage seems to have been done to Borders and Dendy (neither of which would let me take photos) and to Country Road at the other end of the centre. 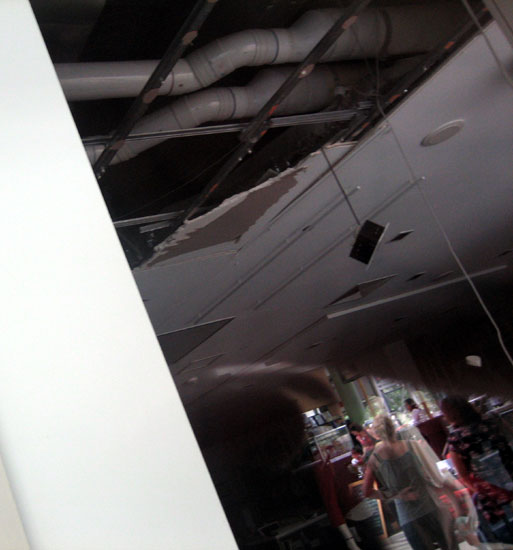 A big chunk of Country Road’s ceiling had fallen in, as seen above and there were lights and plaster all over the floor. Borders looked (from peering in the front window) like it had lost maybe a third of its ceiling tiles, in the front section at least. They had covered the bookshelves in black plastic and there were men wheeling trolleyfuls of soggy plaster ceiling tiles away.

Up near Borders about half the new eating area was closed off and there was a largish puddle on the ground. 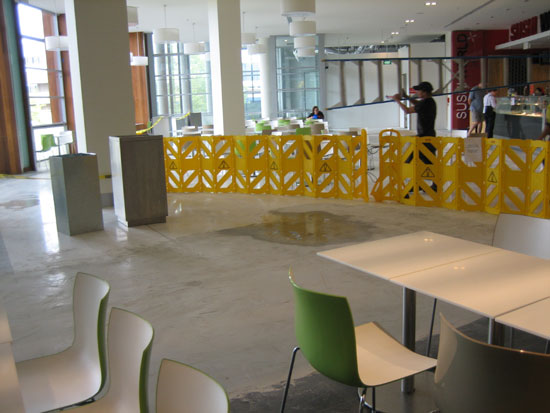 Overboard had quite a lot of water left in its store. Perhaps they should have opened and given people the chance to trial their surfboards. I didn’t notice any other stores with this much water, but did see a shoe shop with piles of soggy shoeboxes up on the tables. 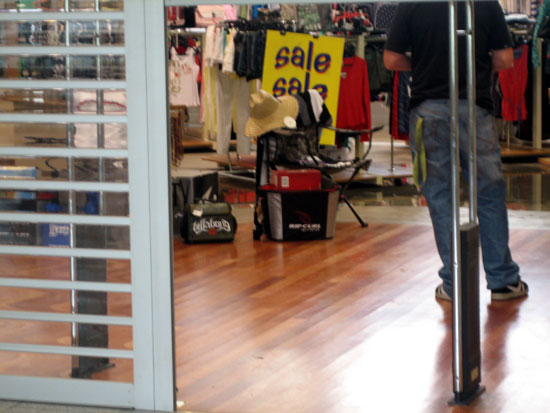 …and I see there’s someone at a table giving you the eye, InfoAddict.

WOW! I’m actually IN that 3rd shot – buying food with my partner at the sushi place… I’m famous! I’m on RiotACT! 😉

Didn’t the ESA folk specifically comment on the construction of the Canberra Centre on the news the other night? Something about it not mattering how well you built it – once the drains and gutters blocked up with hail, and once hail broke skylights and the like, flooding was an inevitability? Gotta love you wannabe armchair architects.

Yep, that way they don’t catch you gawking cause you’re not looking right at them.

I hope I didn’t say that out loud just now.

Have you been reflecting on events again, Random?

Just being nice. I could really get myself into trouble elaborating on the subject. 😛

You hain’t seen them RG

lol attack of the 15-foot hottie

Woah that last picure on that last page looks liek a giant woman sliding on her knees down the elevator.

Al, you have no idea.

When you build on the cheap these things happen.

Especially when you opt for incorrect guttering and downpipes because of cost.

@The_RiotACT @The_RiotACT
Rachel Greaves and husband Gavin McKay launched @CastlepointSys2 about 18 months ago and have grown from just them to a 16-strong outfit with 20 clients across government and business https://t.co/NUcOwCMS7T (19 minutes ago)