Creating an architecturally iconic Canberra for residents into the future
geocon.com.au
22 February 2021

Police have arrested a man in Queanbeyan for refusing to stop for a roadside breath test. Photo: File.

Police officers from Queanbeyan were forced to use a taser and OC spray to arrest a 28-year-old man who crashed into a tree after refusing to stop for a roadside breath test during the early hours of Sunday morning (21 February).

The man was driving on Donald Road in Queanbeyan at about 4:00 am when officers from Monaro Police District attempted to stop a BMW 330CI on Donald Road for a roadside breath test.

The BMW accelerated away, turning left into Murray Street before failing to negotiate abend and crashing into a tree.

The BMW stopped due to the damage sustained in the crash and officers approached the vehicle; however, the driver refused to get out and continued his attempts to drive off.

While attempting to remove the driver from the car, a taser and OC spray was deployed, and the 28-year-old man was arrested.

He was treated at the scene by NSW Ambulance paramedics for minor injuries resulting from the crash before being taken to Queanbeyan Hospital in a stable condition. The man also underwent mandatory drug and alcohol testing.

NSW Police have not yet released the results of the tests.

The man was later transferred to Queanbeyan Police Station where he was charged with failing to comply with a request or signal to stop a vehicle and resisting an officer in the execution of duty.

He was granted conditional bail to appear at Queanbeyan Local Court on Monday, 12 April.

Hopefully he learns a lesson after totaling his car and receiving a massive fine. 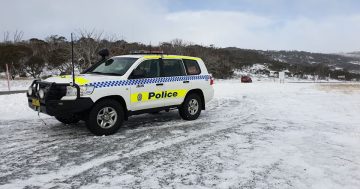