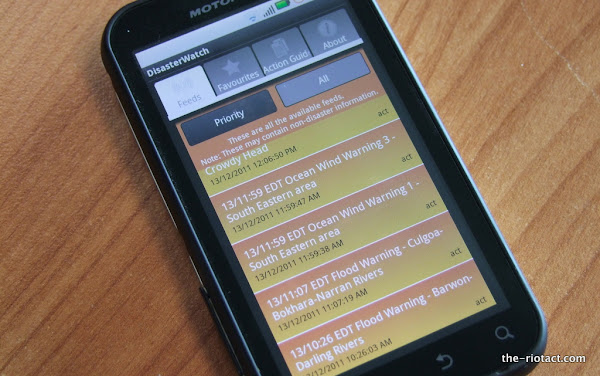 Last week the outgoing Attorney-General Robert McClelland launched something new from our government.

An app. As in software for smartphones.

Having stuck their toe in the appy water no doubt we’ll have a string of app related offerings from a variety of departments around town.

What better way to wangle a long lunch than to be handing out contracts for something as modish as an app to get the Minister on TV when she launches it?

But what does it do?

— An RSS reader of feeds from the Bureau of Meteorology and various emergency services.

There is a little bit of cleverness with being able to share feed items on social networks. But hopes of the message going viral get a little lame when they lack any information:

What it doesn’t do, however, is provide alerts.

Most people would not mind at all if their phone, every half hour, made a quick check of its position and briefly enquired of the Government if there was anything to be concerned about in the area, with an ensuing notification should a positive result come up.

As long as it can be turned off in the settings most of us wouldn’t mind a full blown alarm requiring intervention to turn off.

Some people will flip out completely at the thought of providing the Government a constant update of their whereabouts, but those can surely have an option to just provide a postcode. Or not use it at all.

As it is the ACT feed is full of warnings about, by way of example, flooding in the Culgoa river. I had to look that up. It joins the Darling literally at the back of Bourke.

So it all seems rather pointless.

What would be useful would be a disaster alert with a scale of privacy settings.

Failing that of all the things government spend money on having a team edit the raw data into postcode specific, and relevant, chunks would help a lot.

You can already get the ACT ESA’s RSS feed (and others) direct to your phone.

This would be one of those “developer built to requirements but the spec was horrible” occasions that Government are so good at.

So the government will never/should never be great at making these kind of apps. And there are plenty of not-for-profits, students, and businesses with vested interests in mashing up these sort of things if the data were readily available.

Google crisis response. Public toilet geospatial mapping. Google transit. The data is funded by the public purse and (subject to privacy laws) should be readily available to the public.

http://data.gov.au/. The only stuff I see from AG’s there is about the location of legal services. By golly, if AG’s is managing a bunch of disaster info, get it out there and keep it updated!

+3000. wonder how much was spent developing a substandard product …

if only we had some kind of emergency sms system….

if only we had some kind of emergency sms system….

I think your getting the Culgoa river flood warning as I think BOM has incorporated ACT with NSW. Still your right. This should be Postcode specific for it to be any relevance to users.

Meh. My Pocket Weather app already does the alerts fine, has locational smarts, and does a bunch of other daily useful stuff – like weather…

Michael Jayfox - 56 minutes ago
Mat Barber please explain how you think that new parking ramps will stop it from being an eyesore View
Tristan Wellens - 1 hour ago
Will only rent for about $500 a week per smaller unit 👌🏻 View
Glenn Beaumaris - 2 hours ago
Commercial and retail spaces. What about the ones in the A&A development which are still empty??... View
Breaking 24

Heather Whittle - 2 hours ago
Lucas Anasdow maybe if the money that was thrown at this vaccine was given to other causes too they could be faster. Hard to... View
Alison Brittliff - 3 hours ago
Lucas Anasdow it’s about who we need to protect first, front line staff, then the most vulnerable , the plan isn’t about... View
Rodney TatStan - 3 hours ago
I'd prefer mederna after the results from Pfizer anecdotally by my family getting it in USA not being that great. Variety is... View
Food & Wine 4

Josh van Limbeek - 4 hours ago
What a great article! My Mum is a Red Hatter and she has so much fun too ❤❤ View
Jo Jo Joey - 5 hours ago
Barbara Bennett, I love how much enjoyment your ‘red hatters’ gives you’ 🎈💜❤️💜 View
Property 27

Mookie Moo - 5 hours ago
Assuming this means 80% by Oct within the adult population only? Because roughly 20% of the population would still be kids, w... View
Community 35

Probing the polls: an even split on the app, and do visa holders deserve our support?

@The_RiotACT @The_RiotACT
Michelle Heyman's stunning return to football began with a simple question on Instagram: “Hands up if I should make a comeback to the W-League?" https://t.co/UNn8rDWuj3 (3 hours ago)

@The_RiotACT @The_RiotACT
The 2021 Australian of the Year is Grace Tame. Grace is an outspoken advocate for survivors of sexual assault, particularly those abused in institutional settings https://t.co/Q6nMb1PGRL (4 hours ago)

@The_RiotACT @The_RiotACT
Times have been ruff, so @QTCanberra has rolled out the pet-friendly red carpet & opened its doors to allow furry best friends in their luxury hotel rooms https://t.co/V89hSF18w9 (5 hours ago)