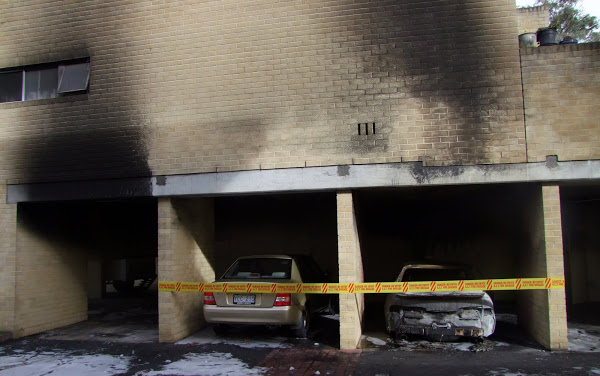 70 people were evacuated when at least 14 cars and a boat were found alight in the car park underneath Condamine Court, Turner.

In another incident, fire fighters responded to an apartment block in Allambee Street, Reid, where two cars were found alight causing a number of people to be evacuated from neighbouring units.

The cause of the fires is yet to be determined. ACT Fire & Rescue have handed the scene to ACT Policing to investigate.

ACT policing is investigating multiple fires which occurred in the city last night and early this morning (Friday, August 23).

Around 11.40pm last night police were called to the first of several fires at a range of locations in the city, in garbage bins, vehicles and a carport.

Around 1.43am ACT Policing was called to another fire in the underground carpark at Condamine Court in Forbes Street, Turner.

The fire caused serious damage to the amenities of the building and forced the evacuation of approximately 60 residents who lived in the 27 flats above.

Shortly after police were also called to a vehicle fire in a carport in Jerilderie Court in Allambee Street, Reid.

Residents of those flats were initially evacuated but due to the minimal damage were allowed back inside their homes.

Police are urging anyone who was in the city area last night and saw anyone acting suspiciously to call Crime Stoppers on 1800 333 000 or via www.act.crimestoppers.com.au. Information can be provided anonymously.

If you’ve got pictures of the carnage* please send them in to images@the-riotact.com .

UPDATE: The legendary Samuel Gordon Stewart was on the scene recording the incident:

If you’re so inclined you can find him in twitter @samuel_sgs .

*Clapping*
Way to go Corbell and ACT Policing. Your piss-weak approach has led to drive-by shootings by organised crims and arson sprees by disorganised crims. Now Canberra is just as bad as western Sydney.

I called ACT Policing last weekend to report some hoons doing burnouts and races. I was asked whether I was prepared to make a statement and appear in court – and I declined because one of the local lads is a F#KING NIGHTMARE THANKS TO A PISSWEAK COURT SYSTEM. So after I declined, the clown on the phone said, “well, what do you want me to do about it?”

this is a true story.

My comeuppance for mocking Kambah’s single car torching on Saturday.

Tuggeranong may wish to do any forensics with the Fire Brigade to see if these are all linked.

Busy individuals (polite term) if these are all related overnight!

Seriously Al? I used to live around there – loud arguments weren’t uncommon.

Sorry I read a hell of a lot every day and can’t put my finger on where I saw that snippet.

Seriously Al? I used to live around there – loud arguments weren’t uncommon.

My comeuppance for mocking Kambah’s single car torching on Saturday.

Plus the excel/pulsar/Hyundai on the Monaro Highway during the early hours of this morning burnt out (near the Johnson Drive roundabout) if Forensics are interested or the Fire Brigade forensic team Busy individuals overnight; a polite term.

Tuggeranong may wish to do any forensics with the Fire Brigade to see if these are all linked.

Busy individuals (polite term) if these are all related overnight!

People standing right next to burning cars? Instead of running for their lives before the inevitable massive explosion?

But seriously, this is just a pathetic act, that will mess up a lot of people’s lives. I’ve seen a report that neightbours heard a loud argument in one of the apartments right before it happened, so here’s hoping for a swift result from the Police.

Now with video courtesy of SGS