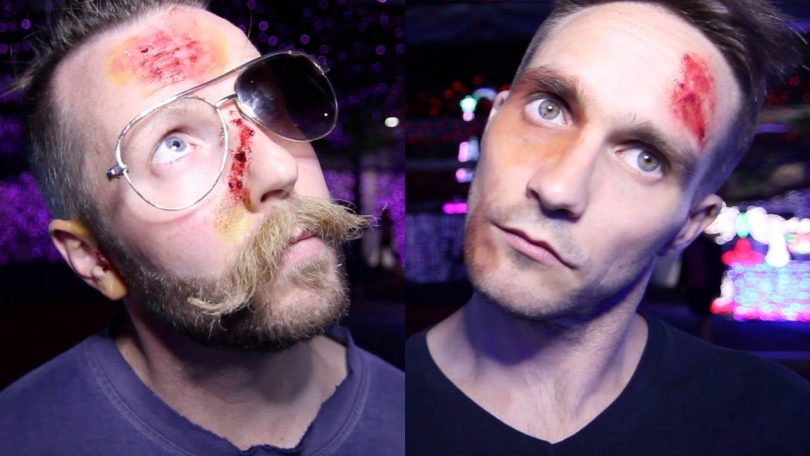 ‘BabyFreeze’ is set to take over the Commonwealth Park Amphitheatre this Friday night from 7 pm. Don’t miss out! Photo: supplied.

Featured in this week’s flagship photo for the RiotACT Gig Guide is BABYFREEZE; the ACT’s most audacious, glamorous electroclash duo. In true Babyfreeze fashion, they have not allowed the recent devastating end to Lobrow’s gigging career get in the way of their new EP, ‘Sometimes Leather’. They have in fact upped the ante, moving the location to the Commonwealth Park Amphitheatre from 7 pm on Friday. Having previously played on a VIP cruise ship across Lake Burley Griffin, unusual venues aren’t a hindrance for Babyfreeze, but rather a necessity. Go check it out this Friday!

Thursday will see Shrapnel cruise into town, aided by local acts Thunderbolt City and Dog Name (the latter having recently released an absolutely sensational EP). Felix Croker will be releasing a new single at Smith’s Alternative, while Lyall Moloney will be at Transit Bar with Juñor and Jye Whiteman.

Friday is BIG! Not only will Babyfreeze be performing with Coolio Desgracias & Housemouse, The Norah Jones Half Hour and devd/sp at Commonwealth Park, but ‘Soundscapes #16’ will be on, featuring what will be an unreal collaboration of Shoeb Ahmad and Paul Heslin as the group Antenatal. Morning TV will be in Canberra for the night with help from String Elephants and The Lowlands, while The Basement will host a huge night of metal, with Hollow World performing alongside stunning black metal juggernauts Claret Ash.

And Saturday will, of course, see Ainslie and Gorman Arts Centre’s long-awaited ‘Day of the Dead Fiesta’, with too many things to mention here going on – just find the link below instead!

Ian McLeod - 13 minutes ago
Charles Godworth yes I do and I also upgraded to three phase and will install a Zappi charger, but most won't need it. The po... View
Ian McLeod - 29 minutes ago
Ben Garden which is what I'm doing and around town 2KW home charging is fine View
News 27

Robert Taylor - 17 minutes ago
I suppose it was unsafe and could not be kept for pedestrians & bikes. Sad View
Stephen Murray - 3 hours ago
I remember the punt that the bridge replaced. View
Christopher Cuba Rabanal - 5 hours ago
I’ve heard the best fish and chips in the bay is closing due to the lockdowns. That’s pretty sad 😢 View
News 27