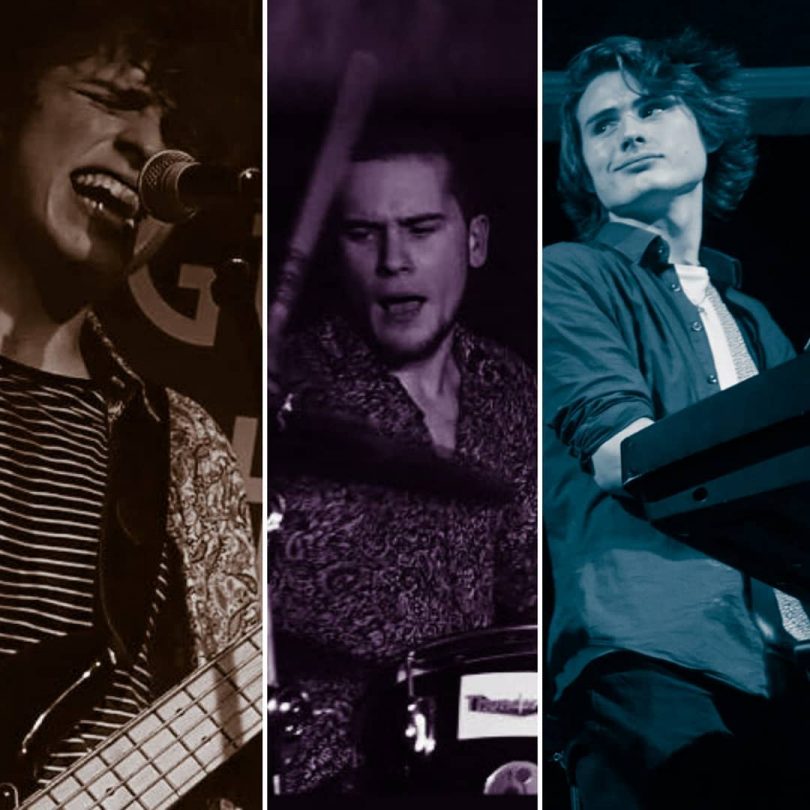 Partly Cloudy will be launching their new single “The Way U Are” at The Phoenix on Wednesday from 7 pm. Photo: Supplied by Partly Cloudy.

Partly Cloudy are an indie pop/rock band that started gigging around a year ago, but you’ll be hearing a lot more from them, especially due to the release of their debut single “The Way U Are”, which is available now on Spotify. The single will be launched on Wednesday the 26th, with help from local musos Harrison Lambert, Nick & Ned and House of Strangers, at The Phoenix from 7 pm. The Smith’s Varietal on the same night is set to be a cracker, with Kid of Harith and Endrey both taking the stage, as well as Lulu & The Tantrums featuring members of The Missing Lincolns (and hosted by former LocalnLive presenter Catherine James).

Charm of Finches will be traveling all the way from Melbourne to set free their latest single “The Bridge” at Smith’s on Thursday, while Brisbane rock band Young Lions will be bringing their East Coast Confessions tour to MOLO Live from 7 pm. On Friday, Tasmania’s Maddy Jane will be playing the UC Hub, along with Ella Hunt’s new project Cathy Diver as well as Lady Denman, from 7 pm.

Cilla Jane – one half of Arsenic & Old Lace which featured in LocalnLive’s list of tracks of 2017 – will be touring her latest solo single “Ice Age” at Smith’s Alternative on Saturday, while over at the Polish White Eagle Club legendary German producer Tolouse Low Trax will be playing with Flower Boy, Trm-B and more from 7:30 pm. And over at the Canberra Theatre, the YouTube sensation Postmodern Jukebox are bringing their show out of the small screen from 8 pm. Oh, and Owen Campbell’s back in town, playing The Phoenix from 8 pm.

Ruth Sear - 2 hours ago
Why are all these celebrities being allowed into the country when our borders are ‘closed’? View
Sarah Walmsley - 14 hours ago
Neil Roberts for Doris.... Matt Daaaaaaaaammoooooon 😂😘 View
Jo Farrell - 15 hours ago
Tricia Wimpenny did he drop into Quirky Crow ??? View
Property 8

Meg Joy - 3 hours ago
Ooj Rin Agree. And of course the only tenants actually eligible for public housing these days all have complex needs. Why sho... View
Ooj Rin - 3 hours ago
The pressure put on the housing sector isn’t for them to suddenly house handfuls of select people, then problem solved.. It... View
Motoring 34

Julie Macklin - 9 hours ago
Linda Stapleton I rode to work in the rain. I had wet weather gear to wear. Well, I did until into my 50s. Then I began to ta... View
Stephen Harris - 12 hours ago
Julian Hayes thenif it increases their costs but not their profits then they will stop doing what they are doing and do it di... View
Lifestyle 4

Shane McMinn - 12 hours ago
Ché Baker will this get a DVD release at some stage?? View
James Constable - 20 hours ago
Two stone age-guys wondering what to do, Who just said, "Dude, let's build a henge or two" View
Food & Wine 3

Dawn Head - 14 hours ago
So glad that Downer is having a life again. We left there 20years ago and lived opposite the park, not far from the scout hal... View
Community 2

bj_ACT - 16 hours ago
The ACT Government is releasing less land for housing than at any time since the 1960s. We can’t place all the skyrocketing... View
Community 1

bj_ACT - 16 hours ago
I have to admit the sensational deciduous trees of our house in Deakin are a lot more shady and cooling than the Eucalyptus t... View
Property 7

A huge family home in Florey has sold at auction for $1.6 million, setting a record for the Belconnen suburb....
Property 21

@The_RiotACT @The_RiotACT
A landmark city office building is on the market - and location is everything https://t.co/YUZKlyWFxQ (25 minutes ago)

@The_RiotACT @The_RiotACT
The NCA will be planting more climate-resilient trees as part of a major program to boost the tree canopy on national land https://t.co/79PKyJu2Rb (2 hours ago)