There's a glare in there as Shine Dome cops new lid 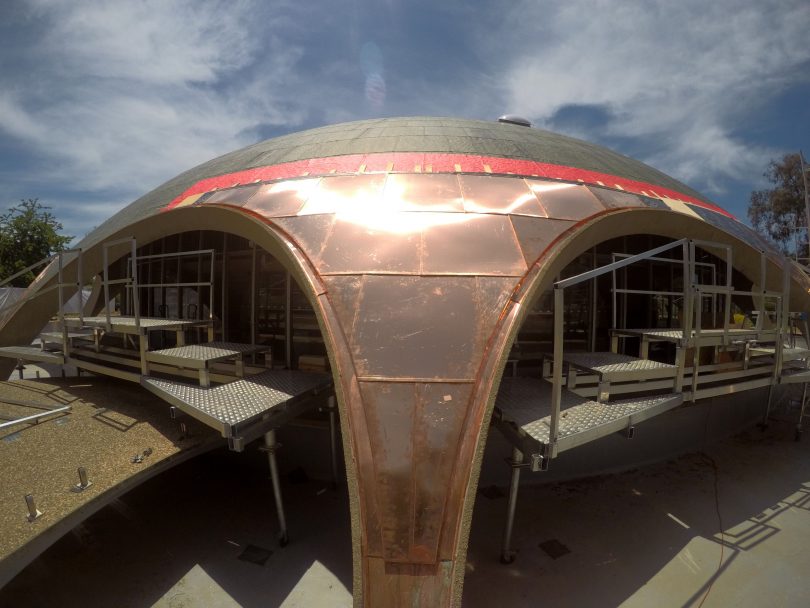 New copper tiles on one of the arches of the Shine Dome. Photos: Australian Academy of Science.

The Shine Dome is living true to its name with a glare from there after restoration works to repair the damage from January’s hail storm which severely dented the Dome’s copper roof tiles.

The concrete roof of the dome is sheathed in copper and under the copper is a layer of vermiculite which partly insulates the interior from outside temperatures.

Rather than removing the existing copper tiles, the Dome will be covered with a second layer of new copper, with a waterproof material placed between the two layers. The dual-layer will create an innovative ventilated roof. Airflow between the copper sheets will provide insulation and energy efficiency. 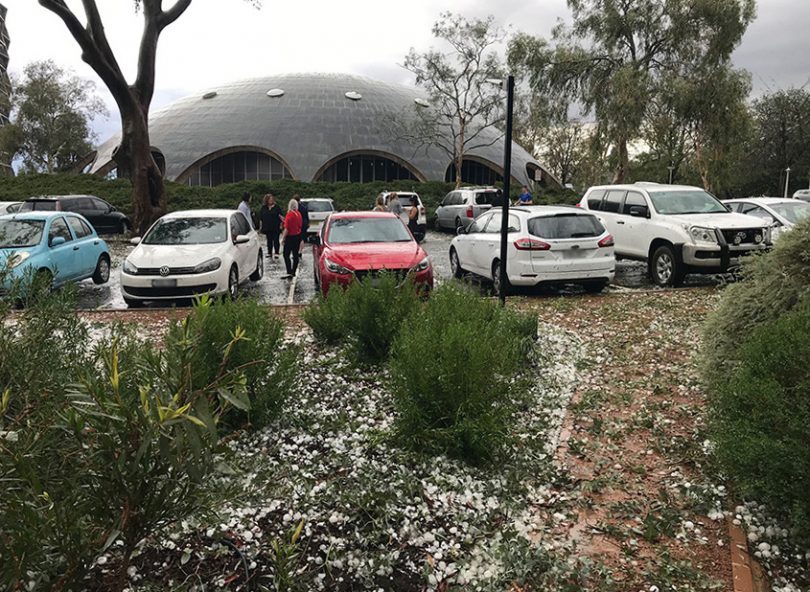 The Shine Dome, Academy staff cars, and Ian Potter House (not in photo) were severely damaged by the hail storm in January.

“When the Shine Dome was first built, its design was described as unconventional and futuristic. It created all sorts of challenges for the architects and engineers involved and the restoration is no different today,” said Ms Arabia.

“This 21st-century restoration of the Shine Dome will see innovative solutions used to bring the outside of the building back to its former glory.”

Work will include replacing the copper over each of the 16 arches where water drains from the roof into the moat.

The original copper was intended to oxidise to a dark green-brown over 10 years, but the clean air of Canberra meant that it took much longer.

The same will be true for the new copper which initially will be very shiny, before it fades to a dark brown during the next 12 months and eventually to a light green over several decades.

Completed in 1959 and designed by Roy Grounds to provide a home to the Australian Academy of Science, the Shine Dome, previously known as Becker House, was the first Canberra building to be added to the National Heritage List.

The Australian Academy of Science’s Shine Dome and the High Court of Australia were both listed in the 2019 top 10 outstanding concrete works in Australia from the past nine decades.

It continues to attract worldwide attention and awards for its unique architectural design.

The restoration work on the Shine Dome is expected to be completed by early 2021.

The Shine Dome remains open for business as an event venue during the repairs.

The restoration work on Ian Potter House is expected to be completed in mid-2021.

Abby LC it really will be shiny then

Totally blinded me yesterday. Sun was just hitting the right spot and gotcha. A bit disconcerting. 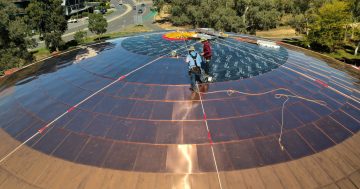 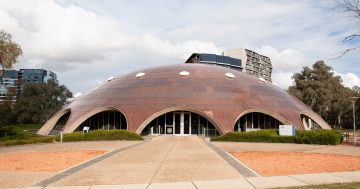