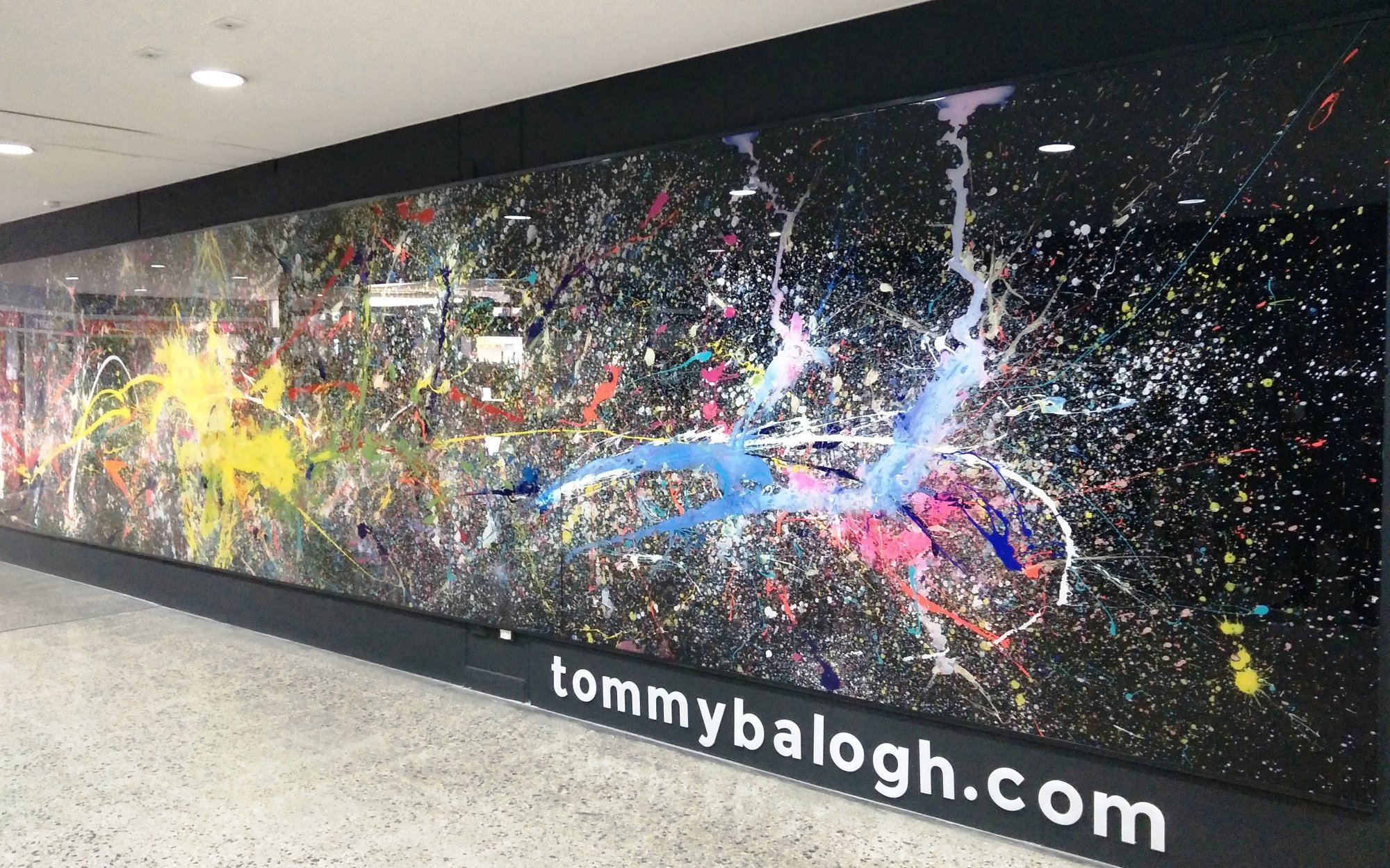 Visual artist Tommy Balogh is emerging as one of Canberra’s movers and shakers. Tommy represents an important slice of creative Canberra; he has raw talent and isn’t afraid of taking risks. I say ‘risk’ because there aren’t many artists who would consider permanently displaying their work on the bare walls of a carpark – and a pretty big one at that.

Initially, I was a bit perplexed about Tommy’s choice of venue. A multi-storey carpark? We might find them useful, mostly tolerate them but more often hate them. However, deconstructing the strategy of showing outside the usual gallery ‘white box’, I can see now see why he has done what he has done and what he has achieved. Sometimes an artist just has to ‘do it’. Overcoming considerable technical and presentation issues, Tommy has created a series of art installations in an environment that has a significant weekday audience: the Citywest Carpark on Marcus Clarke Street in Civic. With 1100 parking spaces spread over 5 floors, most regulars will have seen at least two levels of the building, as well as Tommy’s extraordinary 12-metre long “Voyage” mural immediately opposite the ground floor lifts. Tommy originally started with some smaller works that formed a compact but striking ‘gallery’, and quickly following with ‘Voyage’. He has continued to expand within the carpark, moving from the ground floor, into the elevators, and has recently reached the top floor on level five. What both amuses and impresses me is the exposure his artwork is getting on a daily basis. Even people who may not initially notice they are standing next to an artwork, have to face the inevitable task of pressing the lift button and while waiting for a lift to arrive, hopefully, register they are looking at some art. With Tommy working onsite, they may even just bump into a real life artist! 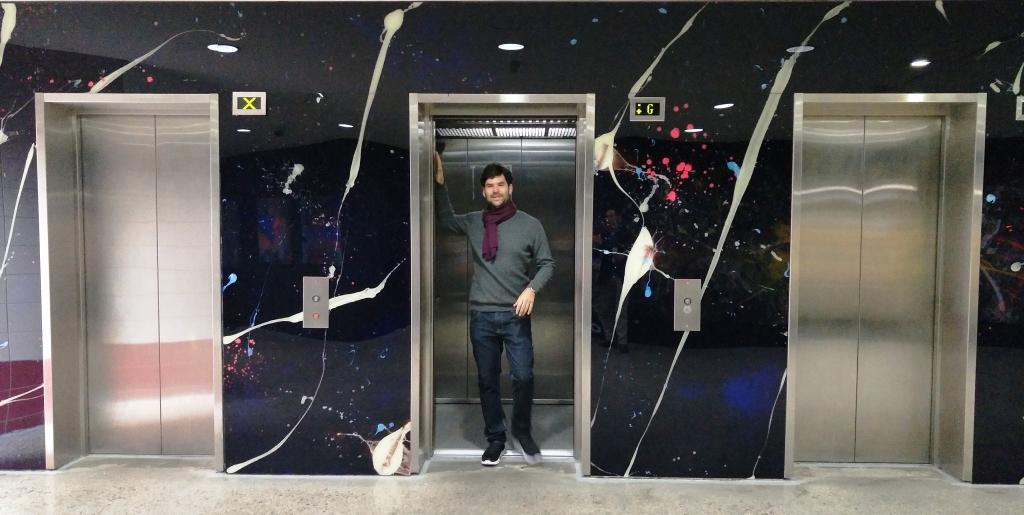 Tommy has spent hundreds of hours working in a make-shift studio in the carpark basement; here he can actually be observed by people parking adjacent to his workspace. So many artists work in isolation but Tommy continues to be excited by the process of creating the work in the carpark. He says, ‘Passersby are surprised – there is all this light coming from a room in the car park, and I love meeting and talking to people.’ Tommy has previously worked on hardened tempered glass, but for the purposes of showing in a public area, he is using plexiglass. His work is of other worlds – far outer space and personal inner space. Put simply, I find his art transformative. He describes his works as’ organic abstract paintings that interact with light, using light as a medium; the colour changes with the light to create moods in the paintings.’ Using imagery from a deep-field telescope, his electroluminescent artwork has photoluminescent media in it and so it reflects light. He also loves the way art and music enliven each other and you can see by just looking at his work how he is fusing the visual with music. He has focussed on process and he has heeded the warnings of those with more experience by ensuring the materials he has experimented with are archivally sound and suit their purpose.Tommy admits he has been strongly inspired by Jackson Pollock. When he said that, I immediately asked him if he works with his ‘canvas’ flat on the floor which is indeed the case, and there is a similarity in their visceral but unique method of mark-making.

He has had many challenges; not only experimenting with new materials but also the complicated process of cutting and fitting the panels around the lift doors. This part of the journey has been shared with another person of extraordinary creative energy, Gaby Gaha. Gaby has provided Tommy with a studio workspace, storage, technical support and the chance to collaborate on this huge project. Gaby is an inspirational force and on the evening I visited to view the wonderfully luminescent works by both UV lights and mobile phone ‘flashlight’, I was impressed with the exchange of creative energy between these two creative people. It was under UV light I was truly able to appreciate the fractal qualities of the richly layered and wonderfully coloured surfaces. 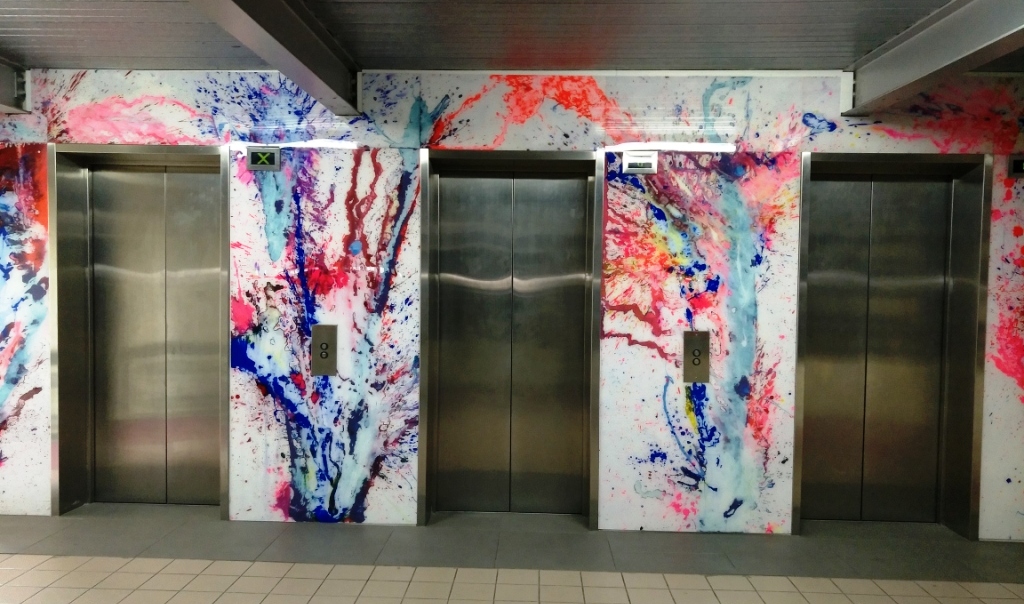 Tommy is modest when he acknowledges his own talent, but adamant that support from so many others has provided him with opportunities that contribute to the scope of the work he will create in the future. Over the past three years, Tommy’s striking works have attracted the attention of a range of people who should be acknowledged. In particular, the Molonglo Group and Dave Caffery assisted him with creating and presenting works for the Art not Apart festivals in 2015 and 2016, and the ANU School of Art generously provided technical support. In 2016, Tommy found himself in the right place at the right time. His work was noticed by international visitors who had ventured into the Citywest carpark, and they were none other than Ingo and Mary-Anne and Kyriakou-Bracke of Vivid International fame. The chance encounter they had with Tommy and his work led to a three-month residency in Germany. He describes the experience as ‘the discovery that there was so much stuff to learn – it was the next level.” 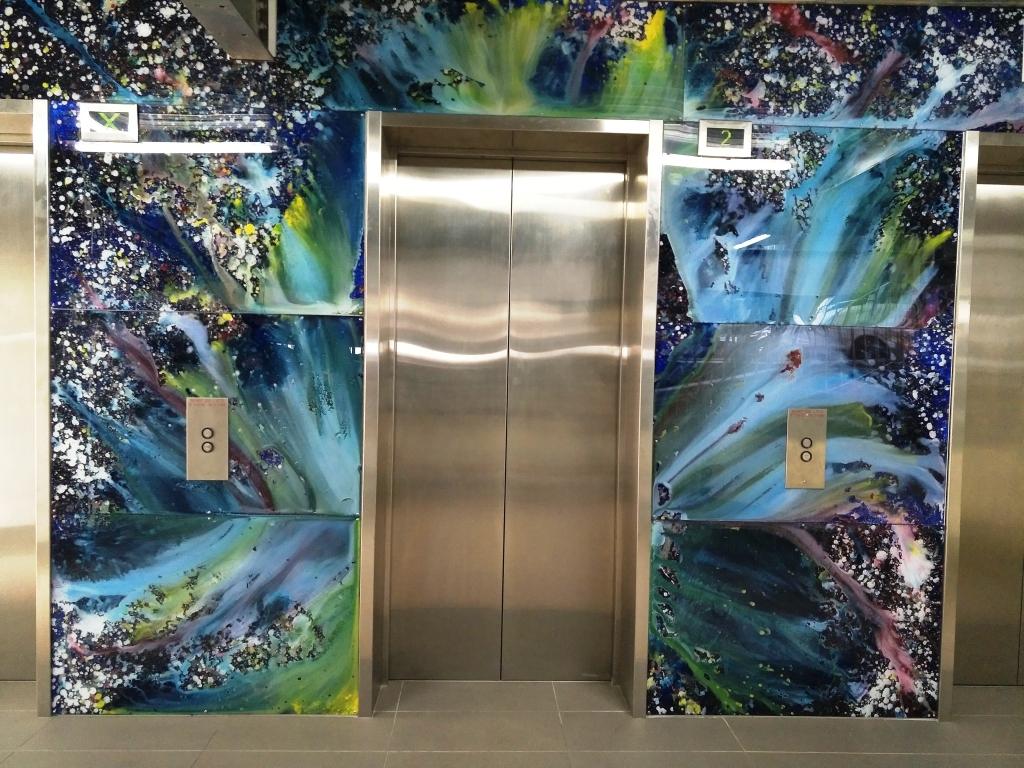 Tommy’s work in the Citywest carpark is very much about his own personal journey, and his success so far proves he has the talent and energy to take his work beyond the car park and out into the more challenging art world.

In the meantime, who is going to see this artwork? Well, just about anyone who works on and near Marcus Clarke Street and needs regular parking, and hopefully, RiotACT readers will be intrigued enough to swing by and check out this ‘exhibition’. Don’t forget to ride the lifts and see every floor, including the roof top. NOTE: the carpark is closed on the weekend and public holidays. 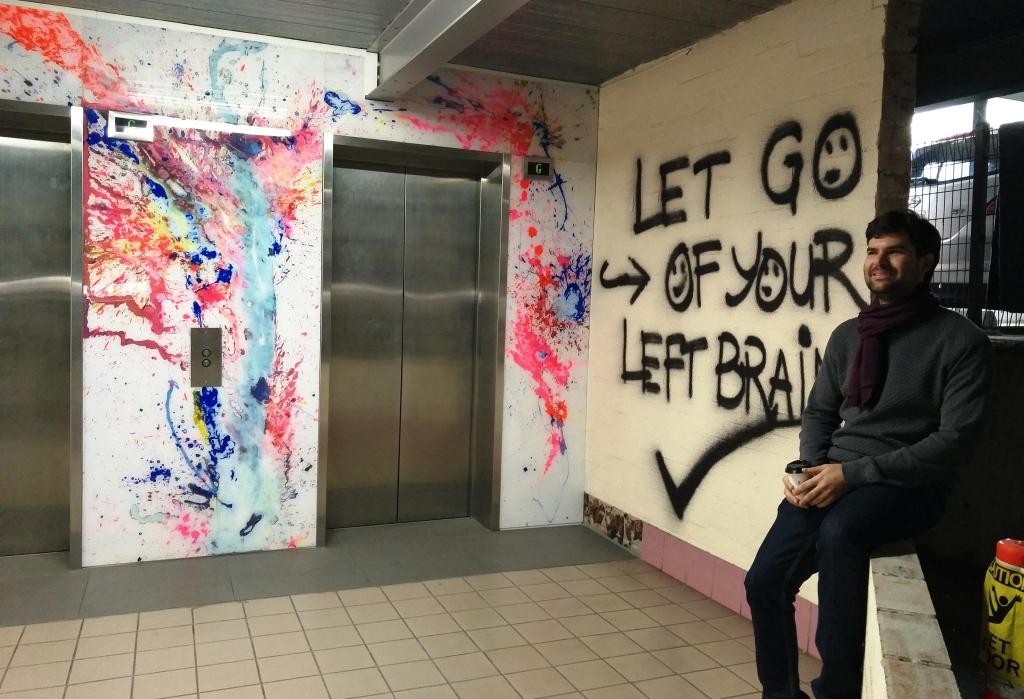 I can’t help but feel that Tommy Balogh, an important artist in Canberra, is on the cusp of great things, indeed an upward trajectory. Watch this space!

All photos by Maryann Mussared

bj_ACT - 7 hours ago
Yes razor it’s a good point. Agree there are pockets of Tuggeranong and Belconnen that could do with some ACT government do... View
mattm - 7 hours ago
There are almost 130 Councils in NSW, and most of them do a much better job with municipal services than the ACT Government.... View
Heavs - 9 hours ago
Competent councils - like this one? https://www.canberratimes.com.au/story/6978805/nsw-central-coast-council-to-be-sacked/ Or... View
Property 7

Art, Not Apart calls for artists to workshop 2020 festival ideas