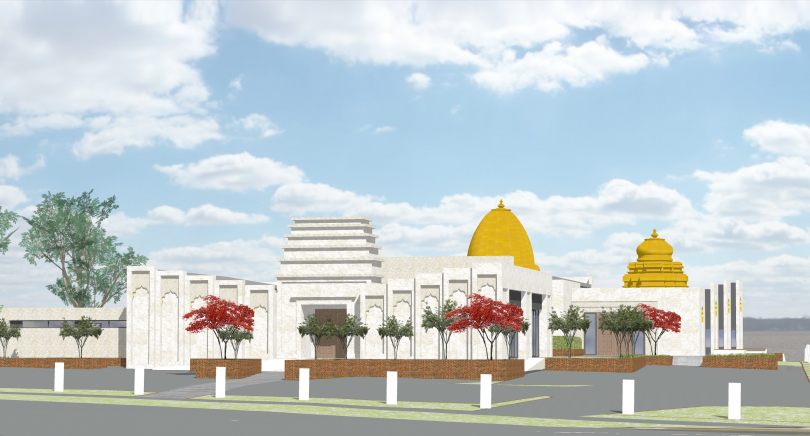 An illustration of the proposed temple in Moncrieff. Images: Thursday Architects.

A new Hindu temple – also known as a mandir – has been proposed for the Gungahlin suburb of Moncrieff to meet the spiritual, ritual and ceremonial needs of the steadily growing Hindu population in northern Canberra.

The $3.3 million project is proposed for Block 5, Section 23, which fronts Mirrabei Drive and Hoffmann Street, with a reserve to the south and a community zoned block to the north, according to the development application prepared by Thursday Architects.

The proposed one-storey temple on the 6092 square metre site will be based on traditional Hindu designs. According to the Canberra Hindu Mandir website, it will enshrine three deities in multiple temple rooms, as well as having a large multi-purpose hall, library and Hindu heritage museum.

The entry building will include amenities, an office and community use rooms, while the larger main temple building will house the multi-purpose hall and the three temple rooms.

The Canberra Hindu Mandir website says skilled Sthapathi artisans from India will be required to build the temple in a phased construction period of three to five years.

The traffic report says the temple will cater for up to 700 people, but that number will mainly occur for ceremonies and festivals, and depend on the time of year. It is expected the normal weekly attendance will be between 100 and 200 people, mainly in family groups.

Cross-section of the proposed mandir.

The traffic report says 55 car spaces, including two for people with a disability, will be provided on the site, which it says should be adequate given the Hindu community will run a shuttle bus for special events and the temple will be on a bus route.

Overflow parking has also been negotiated at the proposed Muslim school nearby.

Landscaping will include site fencing, pedestrian and vehicle access gates and signage, including two illuminated column signs on both street frontages which the DA says should not impact nearby residences.

Children’s play areas will be located on the northern side external landscaped area of the proposed entry building.

A community spokesperson said there was significant growth in the number of Hindu practitioners in Canberra’s north and they were now the third biggest religious group in the area.

The project would follow traditional Hindu temple design with brass domes and carved statues, but the colour palette was chosen so the building blended in with its environment.

The Moncrieff temple will complement other temples in Florey, Mawson and Torrens.

Most appropriate location. It should be well attended.

Wondering if the Concerned Citizens of Canberra will oppose this or is it just mosques that concern them?

Since there are no shops in Moncrieff will they be doing hot chips good coffee and a post office?

So it's no medical, no posting, and no food but we can have a temple.