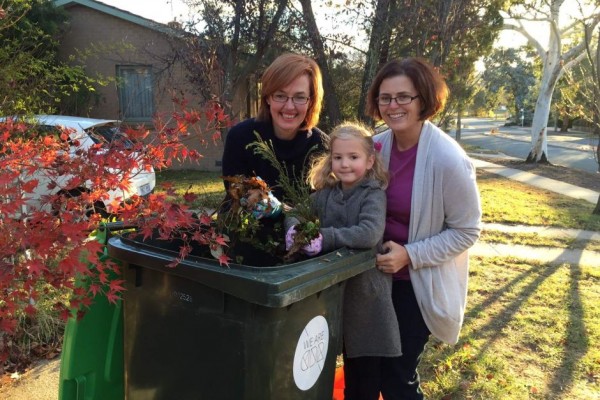 Cath and Sammi Collins (right and centre) with Ms Fitzharris at the launch of the pilot program in March 2017.

The ACT Government has committed to providing green waste bins for all Canberrans who want them by mid-2019, with Tuggeranong collections to start in January next year and Belconnen collections to begin next September.

Following a successful pilot in Weston Creek and Kambah, Tuggeranong residents will be given the opportunity to sign up for green waste collections before the end of this month – from Monday, November 27.

“Every Canberran who wants a green bin will have one by the middle of 2019,” said Minister for Transport Canberra and City Services, Meegan Fitzharris.

“This means we’ll complete the delivery of our 2016 election commitment a year ahead of schedule.”

The bins will offset some of the 5,000 tonnes of garden waste that pours into landfill each year and save Canberrans from travelling to the tip to dispose of their green waste, such as lawn clippings, leaves and branches.

Ms Fitzharris said the pilot in Weston Creek and Kambah had been a big success.

Tuggeranong residents need to pay a one-off fee of $50 to receive the service with the first bins due to be delivered in early January and collections starting later in the month.

Weston and Kambah residents who weren’t involved in the pilot can also still opt-in for a green bin. They will need to pay a one-off registration fee of $50 but eligible concession card holders are exempt from having to pay.

Are you keen to have a green bin? Do you think you will use it regularly? Let us know your thoughts in the comments below.

Is the ACT Government aware that JJ Richards recently made a significant donation to the extreme right wing Australian Liberty Alliance?

Is the ACT government also aware that the ACCC has an issue with that same company?
https://www.smartcompany.com.au/business-advice/legal/accc-drags-waste-management-firm-jj-richards-to-court-in-its-first-small-business-unfair-contracts-action/

Is the ACT Government aware that JJ Richards recently made a significant donation to the extreme right wing Australian Liberty Alliance?

Where is the green waste in these bins taken to? There are several sites in Canberra other than the obvious one at MLRMC. Who is the contractor who collects the waste?

Langers, if you are a Tuggeranong resident then registrations will open next Monday, November 27. You will be able to sign up from the TCCS website and I am informed by the Minister’s office that information will also be provided via a letterbox drop.