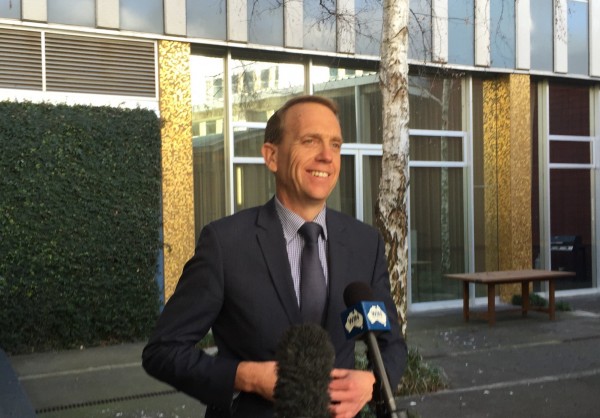 There was a moment today during Deputy Chief Minister Simon Corbell’s valedictory speech today that provided an insight into his sense of humour, often hidden from public view due to the serious nature of his ministerial responsibilities. It involved Wayne Berry and a tropical plant in a white plastic bag.

The veteran MLA was reminding the Assembly and gathered throng of the infamous painting of Bruce Stadium’s dead frost-bitten turf green for an IOC inspection in 2000.

“In Opposition, I sat where Mr Wall sits now, next to me was Wayne Berry,” Mr Corbell said.

“At the start of one question time I noticed Wayne had a white plastic shopping bag under his desk. ‘What is that?’ I asked Wayne. ‘It’s a plant,’ he said. ‘Look, it’s a tropical plant, I left it outside and its been killed by the frost.’

“ ‘What are you going to do?’ I asked Wayne. He replied he was going to ask Kate Carnell why the Government had decided it was a good idea to buy turf grown north of Brisbane for the refurbished Bruce Stadium, surely her officials should have known it would wither in the Canberra frost?

“So Wayne asked the question, the Chief Minister scowled, whilst Speaker Cornwell blustered, demanding ‘Put that plant away Mr Berry!’ as he hollered for order at the temerity of standing orders being breached.’

Mr Berry’s daughter Yvette, who now shares a front bench seat with Mr Corbell in the Chamber as a fellow Minister, was among many in the room who enjoyed the tale.

It was a full house for the speech, with some 85 visitors including members of Mr Corbell’s family, current and former staff and public servants with whom he has worked filling the public gallery seats.

Mr Corbell reflected on the work completed during his 19 years, seven months and three days in the Assembly.

“I have seen up close five Labor leaders,” he said.

“They have all had their own strengths and weaknesses, passions and obsessions, yet all have maintained an unerring commitment to Labor’s cause of progressive government, government that delivers opportunity, fairness, equality and suatainability, for the generations now and, and for generations into the future.”

Mr Corbell said he had served in 14 portfolios over 16 years in government, and considered holding the position of Attorney-General as a deep honour.

“In Labor’s 16 years of Government to date, there have only been two incumbents, Jon Stanhope for six years and myself for a decade,” he said.

“The office of first law officer for the Territory is a role I could have never envisaged for myself when I first entered this place. Yet over the last decade the reforms and programs I have helped to implement will be a lasting commitment to the administration of justice in our city.”

It was in this role that he worked to introduce marriage equality to the Territory in 2014.

“The recognition of the fundamental right of equality through the passage of the Marriage Equality, Same Sex Act of 2014 will always speak to me as an enduring and lasting reform,” Mr Corbell said.

“Although the law was only operational for several days, it has two continuing legacies. Firstly, it ended the debate about where responsibility for this fundamental reform lay. The High Court challenge to our law, whilst successful, made clear it is for the Commonwealth Parliament to right his wrong. So through our passage of our law in this place, we set in train a chain of events that sheeted home responsibility to where it should lay, our federal representatives.

“Marriage equality also did another important thing. It told everyone in our community they were equal and respected, and having having attended a number of marriage ceremonies during those heady couple of weeks, I know it brought, and continues to bring, great joy.”

In reflecting on his time as Minister for Policing, Mr Corbell recalled the tragic death of then Chief Police Officer Audrey Fagan, who committed suicide in 2007 following what had been a difficult period for ACT Policing.

“I can still recall the enormous loss and grief experienced across the AFP at the time,” he said.

“Speaking with former Commissioner Mick Keelty on the night of Audrey’s death, it was clear that some things would never be the same again, yet we both agreed that every support would be provided to Audrey’s family and the broader policing family.

Mr Corbell said it had been the greatest privilege of his political life to champion the city’s transition to 100% renewable energy as Minister for the Environment.

“Our society is in midst of a technological transformation, and the cost of new build wind, and soon solar, generation is already the cheapest form of new build power generation for our economy,” he said.

“Now is the right time for our city to make this transition.”

The Deputy Chief Minister acknowledged the contribution of public servants with whom he has worked over the years, becoming emotional as he listed several key bureaucrats by name.

“Whilst public servants are not, and should not be, any Minister’s friend, the best of them can be invaluable counsel and advisers and change agents for the politician’s policy agenda. I am fortunate to have been served by some of the best,” he said.

Mr Corbell singled out as “remarkable” his chief of staff, Monika Boogs, thanking her for being an “adviser, tactician, sounding board, wrangler, office administrator and confidant rolled into one”.

“The work you have done over so many years to build and lead a cohesive, focused and talented office, one with a strong sense of camaraderie and fun, has been indispensable to me. You are my colleague and my friend.”

In closing, Mr Corbell thanked the people of his electorate for returning him on five consecutive occasions, and the many supporters who had campaigned and supported him over the years.

“I will still be a citizen, of this great and beautiful city, of my home, on the banks of of the gentle Molonglo. And I can assure you all, that as I seek new horizons, and find new paths to travel, I will seek to make my contribution, to a better, just and sustainable society.”

The overflowing public gallery rose to show their respect, giving the outgoing Minister a standing ovation – for his words today, and for nearly 20 years devoted to public life.

Despina Despina - 4 hours ago
We are so lucky in this country. Yet we have the COVID deniers, and anti vaxers who seem to refuse that COVID exists. Thank y... View
Lance Russell Baker - 5 hours ago
Timothy Bailey Too true. Their bizarre belief that they are the world's shining example of democracy is unbelievable. I could... View
David Kidd - 7 hours ago
Timothy Bailey No we do not View
Community 14

Matthew James - 8 hours ago
"where liability falls, should recipients of the vaccine suffer negative side effects" - you get taxpayer-funded medical care... View
Food & Wine 17

@The_RiotACT @The_RiotACT
An array of local and all-star Australian acts will feature at picnic-style entertainment hubs to help Canberra celebrate on Australia Day https://t.co/My7xFBeqRF (5 hours ago)

@The_RiotACT @The_RiotACT
A COVID-19 vaccine program in Australia could roll out as early as next month, but can employees legally refuse to receive it? https://t.co/MCQkZR0IDR (8 hours ago)