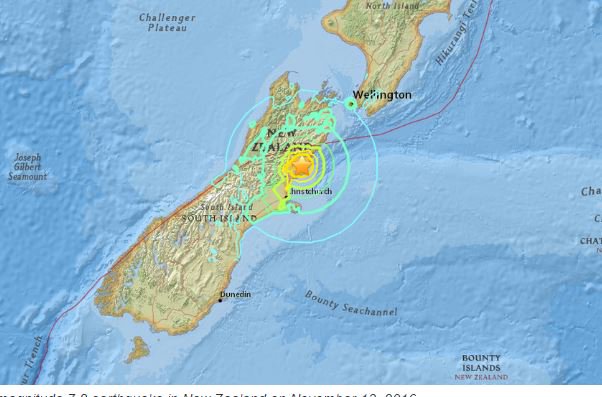 Two people have died after an earthquake of 7.8 magnitude struck the north-east coast of New Zealand’s South Island, leading to evacuation areas in the capital city of Wellington and the cancellation of events planned for today as part of Canberra Week there.

Residents in the New Zealand capital have been advised to avoid the city centre (see Wellington City Council statement below) as there may be structural damage to some buildings and high winds could dislodge debris. New Zealanders are bracing for continuing aftershocks also.

‘Freakshake’ creator Anna Petridis, of Patissez, who had been due to distribute free shakes in Wellington’s Civic Square as part of Canberra Week this afternoon, but has posted on Facebook, “*UPDATE* – Welli Freaks looks like today’s event is cancelled due to last night’s quake! We’re ok, hope you all stayed safe & we look forward to catching you next time ?” and “Hey everyone! Hope you’re all ok!
Looks like today has been called off – stay safe homies!”

Visit Canberra confirmed the cancellation on the Canberra Week in Wellington event page on Facebook:

*EVENT CANCELLED* Due to safety concerns after the earthquake, today’s event from 12pm – 3pm in Civic Square is cancelled. We hope everyone is safe and apologise to anyone who planned to attend our event. For all further Canberra Week in Wellington updates please visit:
http://www.canberra.com.au/canberraweekinwellington/

Also on the program today was a talk by ACT Scientist of the Year Ceridwen Fraser, who flew into Wellington yesterday afternoon. The ANU senior lecturer tweeted last night that she had been evacuated from her hotel due to the quake, later adding a tweet about the aftershocks.

Evacuated from hotel in Welly with a giant earthquake – 6.6 near Hammer Springs. All safe but cracks, leaks etc…

Aftershocks so soothing – now I know why babies like being rocked to sleep.

There has as yet been no official announcement by Visit Canberra or the office of ACT Chief Minister and Tourism Minister Andrew Barr about Canberra Week event cancellations.

A spokesman for the Chief Minister said the ACT Government was this morning liaising with DFAT and Wellington City Council officials.

The next Singapore Airlines Capital Express flight from Canberra to Wellington leaves late this morning, departing the NZ capital to return to Canberra this evening.

We will add details here as they come to hand.

Notice from Wellington City Council at 7am AEST:

Members of the public are urged to stay away from central Wellington for at least this afternoon and evening – forecast high winds could dislodge broken glass and other materials from buildings damaged in this morning’s strong earthquakes.

Wellington City Council inspectors are starting a sweep of the city to do external rapid assessment checks on buildings in the CBD and in suburban commercial areas in the wake of the big quakes. However it is likely that not all buildings will be able to be made safe and there is a risk the forecast winds of up to 140kmh could bring glass and other materials into the streets.

While City Council inspectors, assisted by contractors and other experts, will do their best to undertake rapid external assessments of commercial buildings, it is up to building owners to do internal structural assessments in conjunction with engineers. Tenants of commercial buildings should contact the property owners in the first instance if they have concerns.
Wellington Regional Civil Defence Controller Bruce Pepperell says early indications are that a number of major buildings are showing “signs of structural stress” and that the strong quake will likely have caused a mess and disruption inside some buildings – particularly on higher floors.

Statement from the Ministry of Civil Defence & Emergency Management 7:24am AEST:

This morning’s tsunami threat has been downgraded. There is still a marine and beach threat in place from from Napier to north of Dunedin, Cook Strait coastal areas and the Chatham Islands. For those who evacuated, please check whether or not an evacuation order is still in place for your area before heading home. For the remainder of New Zealand there is no threat.
Tsunami waves have been recorded on the New Zealand Tsunami Gauge Network in Kaikoura and Christchurch (Canterbury), Wellington and Castlepoint (Wairarapa). Waves are expected to continue for at least the next few hours. People should continue to look out for themselves, their families, pets and loved ones and follow the advice of their local civil defence groups.

There have been two confirmed fatalities. Injuries have been reported in Canterbury, and Civil Defence Emergency Management (CDEM) Groups have reported evacuations in Canterbury, Marlborough, Nelson/Tasman, Wellington, Manawatu/Wanganui and the Chatham Islands. The number of injuries and evacuees are not known at this time. Our thoughts are with families and communities affected by the quakes and tsunami.

Ministry of Civil Defence & Emergency Management Director, Sarah Stuart-Black said, ‘the New Zealand public have responded, and continue to respond, to the earthquakes and tsunami warning in a calm and safe way. We’ve seen evacuations in most of the at risk areas and know that many New Zealanders have been checking in with friends and loved ones since the quakes began at midnight.’

‘I want to particularly thank those who evacuated, either at their own discretion or after receiving instructions to do so. Your strength, trust and willingness to do the right thing not only helps to keep people safe, but makes our jobs and the jobs of other emergency services much easier. ’

Transport has been disrupted including state highway one between Blenheim and Picton is closed. State Highway 6 between Blenheim and Nelson and State Highway 7 between Springs Junction and the Waipara are also closed. Several bridges on the state highway network are reported as damaged and closed. Hanmer Springs is cut off. Rail networks in the lower North Island, and between Christchurch and Picton, are closed. All InterIslander ferries have been cancelled today.

As information continues to flow in we have received multiple reports of damage to property in the South and North Islands. Damage has been reported in the Canterbury, Blenheim and Wellington regions, including widespread damage and building collapses reported in Kaikoura. Electricity outages have been reported in Wellington and Manawatu/Wanganui. Building inspections are underway to ensure that they are safe to occupy. If your property has been damaged make sure you check for any dangers such as gas or water leaks. Your insurance provider and the Earthquake Commission will be able to provide advice on how to lodge a claim for any damage.