A screen grab of the x-ray test of the excavator, which found 384 packages of cocaine.

In the largest ever drug interception operation coordinated by ACT Policing, around 384 kilograms of cocaine have been seized and two men charged with drug importation offences.

The joint operation began earlier this year when ACT Policing received a tip-off about a drug importation syndicate operating in southern NSW and ACT.

In June, a second-hand excavator was intercepted at Port Botany in Sydney from South Africa. The excavator was x-rayed at the Sydney Container Examination Facility and anomalies were identified in the x-ray image.

Around 384 kilograms of cocaine worth around $144 million in street value were discovered in the hydraulic boom in the arm of the excavator.

Border Force and Australian Federal Police officers cut into the arm of the excavator where they found 384 packages of cocaine, each weighing a kilogram.

Police seize $144 million worth of cocaine

They appeared in the Queanbeyan Magistrates Court on Monday (15 July) where they were remanded.

“As a result of the investigation, two people have been charged, with a maximum penalty of life imprisonment,” he said. “It is clear to us that this group thought bringing drugs into our district in this type of machinery would avoid police interest. How wrong they were. 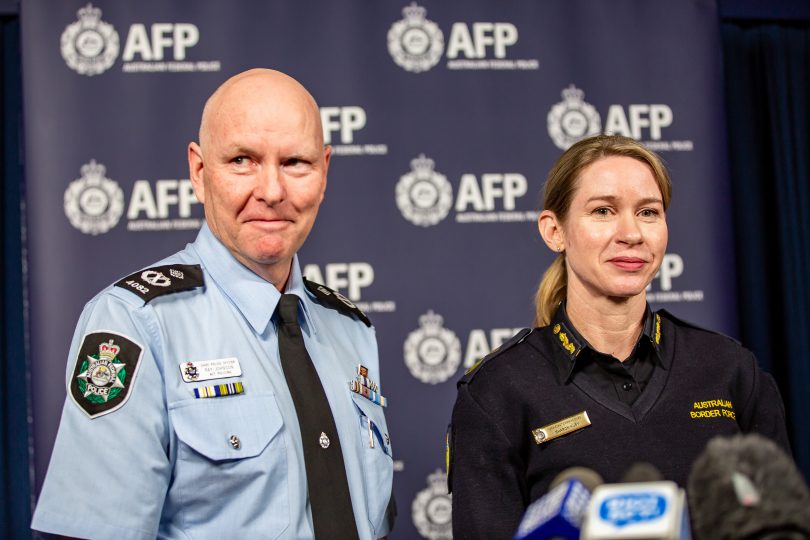 “With this particular method, it is the first time that we are aware of. It is possible that the syndicate have imported drugs before. We have had an interest in the syndicate for some time.”

CPO Johnson said he wouldn’t rule out the possibility of further arrests, both relating to this seizure and potential other criminal activity the syndicate carries out.

It was the largest drug seizure coordinated by ACT Policing, with the assistance of New South Wales Police, Australian Federal Police’s National Anti-Gangs Squad and Australian Border Force, and even South African police. 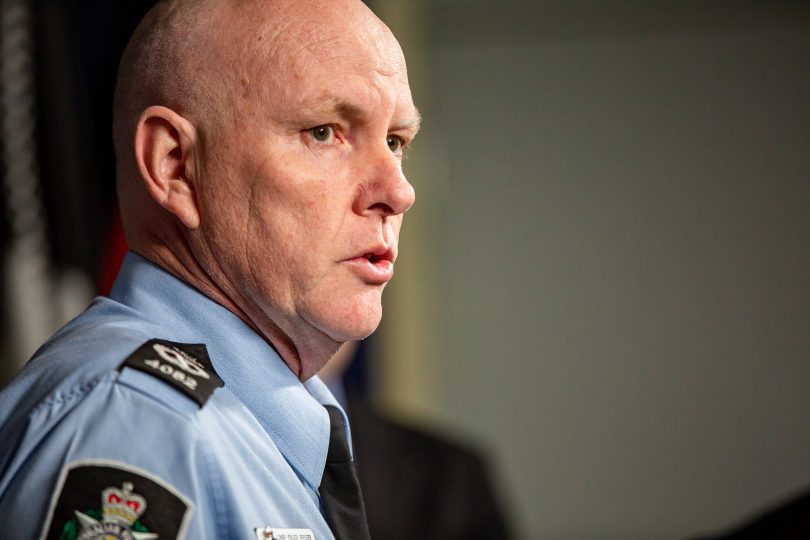 “This joint operation showed the ACT shouldn’t be seen as an easy target for criminal gangs to bring in drugs” – CPO Johnson.

Australian Border Force Acting Deputy Commissioner Operations Sharon Huey said police were focused on working their way up the supply chain to find who is responsible.

“It was highly specialised and incredibly sophisticated concealment,” she said. “To put this into perspective, in the 2017-18 financial year, approximately 795 kilograms were detected at the border. This concealment represents almost half of the previous year’s total detection of cocaine.

“Our message is that we do have the skills and the technology and the commitment to prevent this type of importation, no matter how it comes in. We will bring down those responsible.”

Police are urging anyone who may have any information about the activities of this group to contact Crime Stoppers on 1800 333 000, or via the Crime Stoppers ACT website.

ABC local radio named the men this afternoon on a news bulletin. Not the “Griffithesque” names one might have expected in relation to drugs in Bungendore!

David Jenkins - 4 hours ago
Road rules aren't the same as licencing 🤷‍♂️. Make up your mind which you're going to have a whinge about. Given hor... View
Claudio Neumann - 8 hours ago
Jesse Pricsina I feel these vibes very strongly. also get off my lawn darn kids with their scooters View
Michael Ilsley - 9 hours ago
I love scooters, fabulous! View
News 12