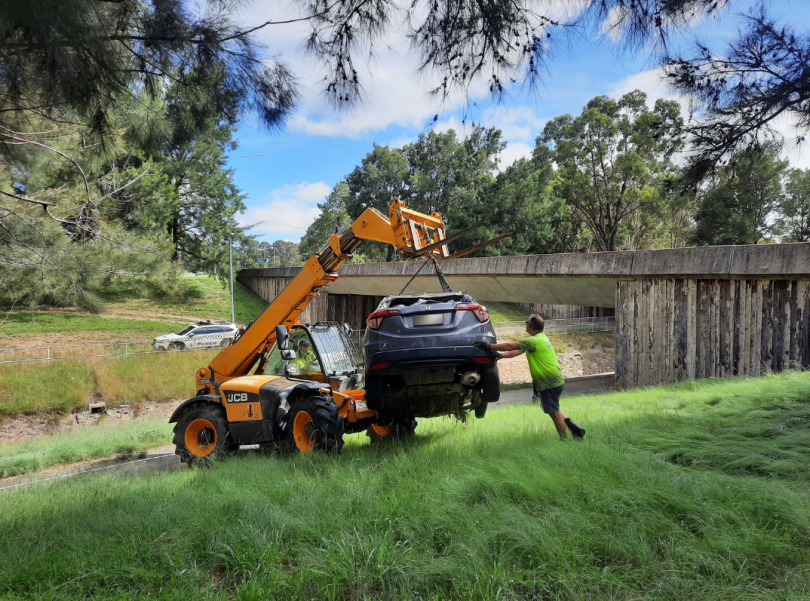 The car was removed from the crash scene this morning (27 January). Photo: Ian Bushnell.

A man has died after a single-vehicle accident near the northern intersection of Drakeford Drive and Athllon Drive, in Greenway last night.

Police said that about 8 pm it received reports that a car being driven north on Drakeford Drive had gone on to the median strip for more than 100 metres before returning to the road, crossing the northbound carriageway and crashing into a storm water drain, where it came to rest on its roof.

Despite the efforts of passers-by, police officers, ACT Fire & Rescue firefighters, and ACT Ambulance Service paramedics, the man died at the scene.

Drakeford Drive remained closed for several hours while investigations into the collision commenced.

A crane was needed to lift the wrecked Honda SUV out of the storm water drain when it was removed from the scene this morning.

Police thanked the people who provided assistance after the crash, and motorists for their patience last night and this morning.

ACT Policing’s Major Collision Team is investigating the circumstances of the incident, and a report will be prepared for the Coroner.

Police urged anyone with information or dash-cam footage from around the time of the incident to contact Crime Stoppers on 1800 333 000, or via the?Crime Stoppers ACT website. Please quote reference P2048903.

This is the second death on ACT Roads for 2022.

Hope his family is ok