An artist’s impression of a streetscape inside the estate. Images: Village Building Company.

Village Building Company’s proposed $140 million housing development in Weston has been rejected by the planning authority in a Notice of Decision that pans the project for its ‘monoculture’ of small blocks, uniformity and lack of access to sunshine.

The EDP included a mix of 261 freestanding and two-, three- and four-bedroom townhouses, and three linear parks instead of one central park.

Key issues identified were its inconsistency with the desired character of the area and surrounding neighbourhood, and high density.

In a statement, Village said it was surprised and disappointed after preparing a development application that it believed was best for all stakeholders and compliant with relevant regulation.

“We have undertaken thorough engagement with the community and the relevant government agencies over the last two years in which we addressed the issues raised and responded to feedback,” Village CEO Travis Doherty said.

“We disagree with the decision and remain fully committed to the development of the site. We are now working through our next steps.”

In the decision, the development proposal is described as monoculture, dominated by small compact blocks that lack variety and choice, and there was no evidence that it would result in an efficient living environment.

“Medium and large blocks could facilitate other uses permitted under the zoning and current lease such as a health facility, community activity centre and place of worship thereby further contributing to neighbourhood character and services,” the decision says.

It adds that three-storey buildings dominate the streetscapes and do not achieve a high standard of residential amenity, with many roads not having footpaths and street trees not providing enough shade.

“The excessive reliance on zero-metre front setbacks (often with two storeys at this setback) is not a familiar configuration for Canberra, nor is it generally supported in the dwelling codes,” the decision says. 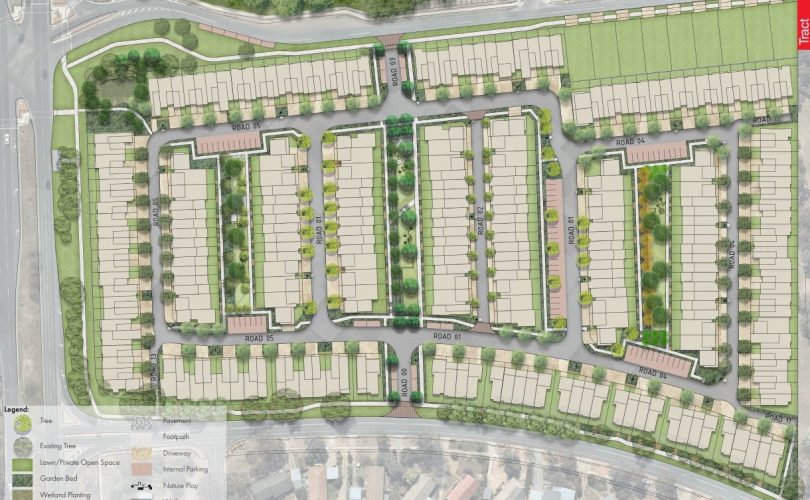 The EDP was criticised for its monoculture and rows of townhouses.

ACTPLA was also concerned about the narrow east-west orientated blocks resulting in limited sunshine, which it says the proposal recognises by providing skylights for dwellings.

“The density of the development in conjunction with the prevalent block orientation is considered to limit the solar access of future dwellings and is not supported,” it says.

Many north-facing blocks have also been designed with limited frontage, reducing sunshine at ground level in living areas. A wider frontage for such blocks or grouping of blocks for multi-unit development would be preferable, the decision says.

It says the energy efficiency of future dwellings will most likely require higher energy costs, particularly during winter.

The proposed removal of trees on the site also fell foul of the planning authority, which says is not a suitable response to the site constraints and opportunities, and that redevelopment of the land should be carried out in a more sustainable manner, including by providing more open space.

The decision also criticised the proposed linear communal parks which it says have significant retaining wall and level changes, are all narrow and near many dwellings, limiting outdoor recreational and active living and travel opportunities.

“Wider and larger-scale outdoor areas as per the publicly exhibited initial configuration are considered a more reasonable approach to this objective,” it says.

It also had concerns about the management of increased traffic generated by the development.

The cleared and sloped 58,596 square metre site at Weston (Block 1, Section 82) is bounded to the north by Unwin Drive, to the west by Streeton Drive and to the south by Heysen Street, and is zoned RZ4: Medium Density Residential.

Village paid more than $30 million for the site in a competitive tender.

This deserved to be blocked. It’s worse than the previous plan here – https://the-riotact.com/village-reveals-revised-plans-for-weston-housing-development/256348

Maybe VBC can dangle the carrot of revamping Featherstone Gardens at the same time. It desperately needs a new toilet block, some bbqs and play equipment.

Bek Clark - 1 hour ago
Yeah, like the highways leading from coal mines to port. Fun times. View
Robyn Holder - 2 hours ago
So many they are struggling to keep up esp when some weeks it hardly stops raining. You can't fix them wet. View
Mike l'Pirate - 5 hours ago
Nada Krstin the big issue is it generates a vast difference in vehicle speeds between 20 and 60kph. Differences in speed and... View
News 7

TimboinOz - 3 hours ago
Wowww! What a lovely story.... View
Community 4

George Watling - 4 hours ago
I have serious doubts about this micro-forest method. Lots of claims are being made about its benefits but there is no scient... View
Business 1

Capital Retro - 5 hours ago
What are the tax implications of these schemes? They are being marketed as commercial in spirit to deal directly with distrib... View
Community 29

nickwest - 6 hours ago
I'm not sure about the politics but the rates increase is supposed to eventually replace stamp duty. The idea is to reduce to... View
News 11

Juz Hawke - 9 hours ago
Ed N Joanne Towner for sure! View
show more show less
*Results are based on activity within last 7 days

@The_RiotACT @The_RiotACT
When Pansto the rakali was recently discovered in Queanbeyan, he had significant health issues, but now he's been nursed back to health by Wildcare volunteers and released into the wild https://t.co/wL38Yz9hAG (3 hours ago)

@The_RiotACT @The_RiotACT
Symphonies, country music, ceramics - there really is something for everyone this week. As always, check ahead before you go https://t.co/5ZSYZ1CzVr (5 hours ago)

@The_RiotACT @The_RiotACT
Planning Minister Mick Gentleman has stepped in to approve the Canberra Hospital expansion, but both the @CanberraLibs and @GreensACT have slammed the decision https://t.co/Y0hrUZoUE0 (7 hours ago)