What do a Whisper, an Intermittent and a Bugle have in common? 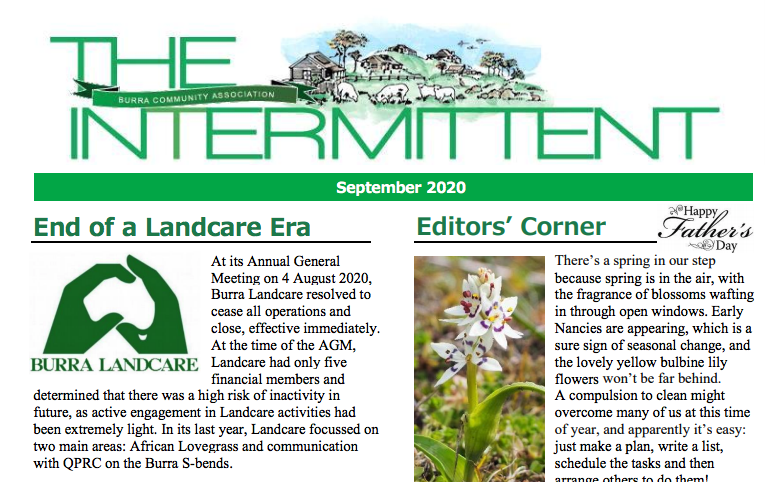 “Rupert Murdoch has nothing to worry about,” says the president of the Wamboin Community Association, Peter Evans, while talking about their monthly newsletter, the Wamboin Whisper, which is getting louder with each edition.

A column from 15-year-old Luke Downey about Wamboin’s bird of the month creates a flutter, alongside a number of newsletters connecting their communities in an age of digital news and social media.

The Wamboin Whisper has been publishing since 1981. Photo: Screenshot.

In Braidwood, the Changing Times is literally changing the regional media landscape, while the Braidwood Bugle became the go-to source of information during the summer’s bushfire emergency.

At Burra, The Intermittent features data from local waterways along with regulars who write about gardening, land care, new roads and their rural fire brigade.

While Prime Minister Scott Morrison this week pledged to ensure the future of regional media services, the bush telegraph is alive and well, with publications such as the Googonian Gazette, Sutton Chatter, Burra Intermittent, Regional Independent in Bungendore and Gundaroo Gazette.

In Yass, the independently owned Yass Valley Times printed its first edition on 10 June and has taken over where the Yass Tribune, first printed in 1879, left.

In Crookwell, the Lions Club of Gunning newsletter is considering replacing the Crookwell Gazette by extending the reach of the popular newsletter.

“We have a print run of about 360 copies that are delivered to households by a team of a dozen people, while we have an email list of 250 subscribers,” Robyn says.

“The Intermittent used to live up to its name as to when it was printed, but in the last few years, we’ve published every month.”

A survey of readers last year also uncovered the importance of their local newsletter.

“Without The Intermittent, Burra would cease to exist as a community,” said one enthusiastic supporter. 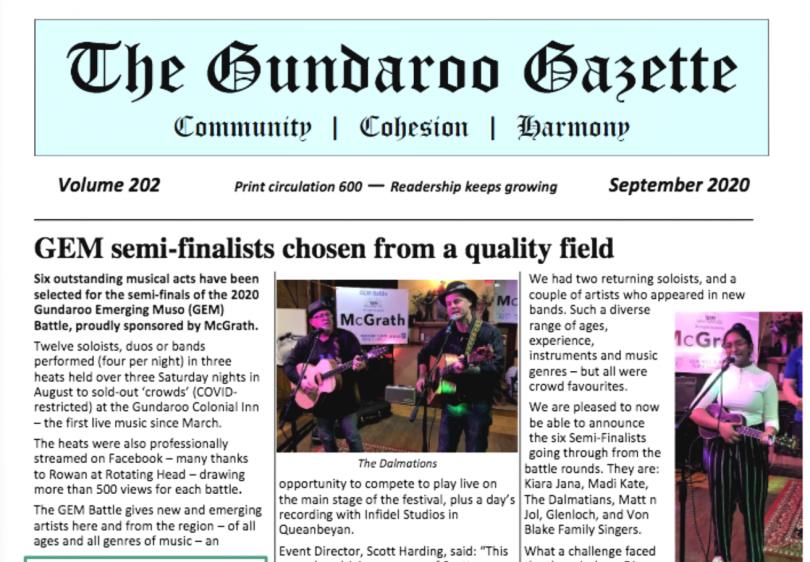 While Queanbeyan-Palerang councillor Pete Harrison writes a regular column that appears in the Burra and Wamboin newsletters, Peter Evans from Wamboin said politics is a bit of a dirty word for the Whisper, which is delivered to 1300 letterboxes each month.

“We remain neutral with politics, but we still have a local councillor who puts a column in about things that may be concerning, such as dual occupancies and neighbourhood shops,” Peter said.

“Our Whisper has been running for nearly 40 years and it’s all run by volunteers, while our editor Ned Noel does a fantastic job of being the glue that holds it all together, especially when I submit my articles at midnight the night before publication.

“Facebook is pretty prominent these days, but because of our demographic, not everybody uses Facebook or a computer, so having a hard copy is really effective and we hope it continues long into the future.”

READ ALSO: Why free, good quality local media matters more than ever in this region

Former editor of the Braidwood Times Alex Rea started the Braidwood Bugle on Facebook in 2017 out of frustration of not seeing enough local information.

“I was particularly irritated when several prominent members of the town passed away and didn’t even get an obituary,” says Alex.

The Bugle grew quickly and when the first bushfire hit the area in November last year, readership exploded.

“Through January, I was working around the clock to provide the latest updates with local information gleaned from multiple community sources as well as the official channels. In January, the Facebook reach of the Bugle topped 1.1 million,” Alex said.

While the Bugle has started a free weekly digital edition, copies are also available by email subscription.

But for the hard copy newsletters that knit the fabric of small towns, they will continue to provide an alternative to the often unsolicited discussion on Facebook community groups.

“The Intermittent is here to stay as the importance of community newsletters can’t be underestimated,” says Robyn. “They really do create that feeling of community that gives people an outlet to share their thoughts and ideas in a more detailed way than Facebook or Twitter.”

Kim-Ling Richardson - 3 minutes ago
Serina Bird Great idea and so exciting! Is the website still under development? Not much was working when I just checked View
Sport 125

Eric Tenthorey - 9 minutes ago
Graham Smith I agree completely. It's like a progressive tax. View
Eric Tenthorey - 22 minutes ago
In Canada you actually need to pay a fair amount to access a facility like this. As you would with skiing. A small parking fe... View
Andrew D'Arnay - 30 minutes ago
Just ride your bike !! View
Community 22

Shannen McCann-Geiger - 42 minutes ago
The wife looks super happy to be there View
Will Scott - 9 hours ago
Pat Smith he always has loved the tale of the bushranger View
Alexis Nerrida - 9 hours ago
Ginger Oliver chris hemsworth is cool but it’s no local legend/matilda’s star ellie carpenter... View
Opinion 15

Denise Bourke - 8 hours ago
More dodgy research on this eh? Like the research on having weed in family backyards? Kids form addictions without parental c... View
Iain Somerville - 13 hours ago
This is not just about the right to choose to die. It is also about Canberrans being classed as lessen citizens by being deni... View
David Newman - 14 hours ago
Linda, exactly. It’s as if the ACT’s and NT’s residents have a lesser right to self determination than residents of the... View
Lifestyle 8

tuggeranongist - 10 hours ago
All things being equal, I would prefer to deal with a large institutional landlord than an individual one. I suspect many oth... View
Redgum - 11 hours ago
Better Renting is correct on one point only. The decision to invest in a rental property is a business decision. Investments... View
Community 27

kenbehrens - 12 hours ago
Government charges contribute towards the high cost of rent in Canberra. It's Government policy to increase Rates, to a level... View
Geoffrey Bell - 14 hours ago
Mandy Truman $206 cheapest share place i could find. https://www.allhomes.com.au/share/search?region=canberra-act&district=gr... View
News 246

Claire O'Brien - 12 hours ago
My sister broke her back on this same flying fox in the late 80s/early 90s. The drop is too high in areas. My daughter did na... View
show more show less
*Results are based on activity within last 7 days

@the_riotact @The_RiotACT
If you love golf, this family #home is close to the Gold Creek #golf course, with views over the #fairways and beyond. Give the huge 80s home a little spruce up, then relax on the balcony and watch the afternoon golfers tee-off https://t.co/sVglXTIFMt (12 hours ago)