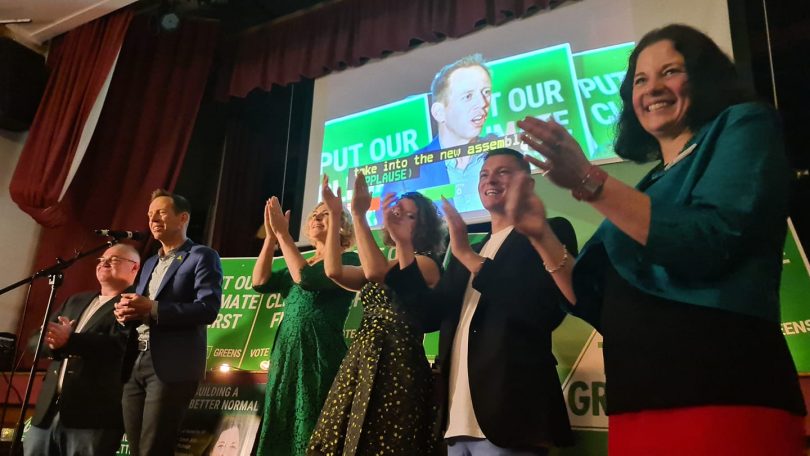 The two major parties spent about the same as each other on the 2020 ACT election campaign. They spent a little more than a million dollars each, but the Canberra Liberals outspent ACT Labor by more than two to one on advertising, according to Elections ACT.

The body responsible for overseeing the election has released financial disclosure returns showing how much all the parties, non-party candidates and third-party organisations spent and where.

The next biggest spender was the Belco Party, with $56,798, but it failed to get a candidate up.

More than half of Labor’s spending was on consultants’ and agents’ fees, at $561,483, followed by $303,978 on unauthorised materials such as direct mailing – including printing and postage – business cards, T-shirts and balloons.

The Liberals’ expenditure was more evenly spread with spending on authorised and non-authorised materials at $312,211 and $367,981, respectively, and $85,049 for consultants’ and agents’ fees.

Both parties spent similar amounts on polling and research – Labor with $99,074 and the Liberals with $115,537, but given the Liberals’ optimism going into election day, it may be considered a poor investment.

On the other hand, the Greens spent nothing reading the tea leaves and were the surprise result of the night.

Radio and television dominated paid political advertising, with very few print or online ads. The Liberals outspent Labor in this regard by $186,067 to $71,565.

Independent Li Fuxin spent the most of the non-party candidates with $27,953, followed by Woden Valley Community Council president Fiona Carrick with $13,693.

The ANU’s Smartvote Australia online platform, which matches voters to candidates who share their policy positions, was the third biggest spender, at $25,080, on consultants’ and agents’ fees.

bj_ACT - 10 minutes ago
That’s a really interesting read A nony mous. We deserve to know more research and analysis. Many of the Oaks and Cedars of... View
A Nonny Mouse - 4 hours ago
The Local Government Association of South Australia commissioned an 'Independent Inquiry into Management of Trees on Public L... View
bj_ACT - 5 hours ago
I’d certainly like to see some peer reviewed stats on the tree falls in Canberra. I noticed on radio last week the TCCS exe... View
News 10

@the_riotact @The_RiotACT
ACT Senior Australian of the Year and 50-year volunteer with @stjohnaustralia Valmai Dempsey wants mandatory #first-aid training for learner #drivers. She says it's a no-brainer https://t.co/Xovhw0Ec3H (42 minutes ago)