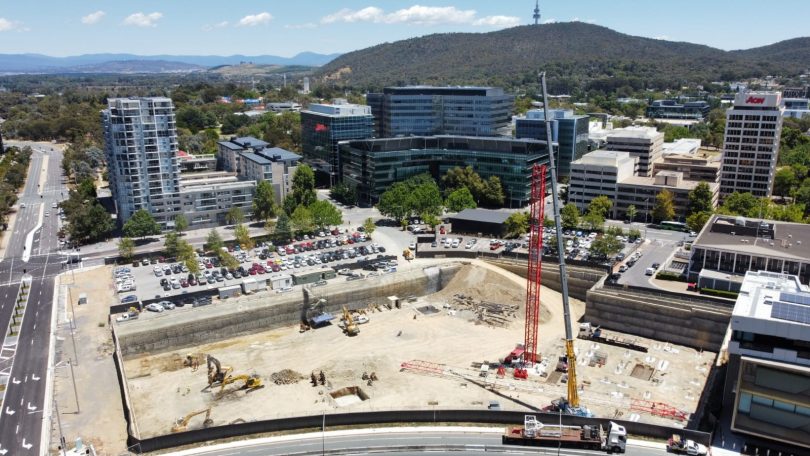 The first of two cranes has been installed on the One City Hill site in Canberra’s City West. Photo: Supplied.

More than six months after a key city development fell victim to the COVID-19 pandemic, a crane has been erected over the One City Hill site but it isn’t to erect a new residential or office building.

Morris Property Group (MPG) had planned a mixed-use development for the site in Canberra’s City West – that had been a surface car park for many years – only to shelve the development in June 2020. But it is now commencing work on a 750-space car parking station in the below-ground portion of the development area.

The project and the Edinburgh Avenue Extension to Vernon Circle were conditions of the development agreement with the Territory.

MPG completed the extension just before Christmas and it is now open to traffic after approval and acceptance from Transport Canberra and City Services.

The Edinburgh Avenue extension will provide greater connectivity to the city and an alternative route through the city during and after the construction of light rail Stage 2A from Alinga Street to Commonwealth Park via London Circuit and Commonwealth Avenue.

MPG Construction director James Morris said the first of two tower cranes was installed this week, with the first major concrete pour for the car park expected to be undertaken in early February.

But there is no further word on plans for the rest of the site.

“There is no further indication on what the future use of the site will be as the company continues to reposition itself following the effects of COVID-19,” said Mr Morris. “The car park works are expected to be completed in September 2021.”

Last June, MPG blamed a perfect storm of market jitters and dwindling international student numbers whipped up by COVID-19 for it calling a halt to the development project, which would have delivered 345 apartments and 600 square metres of shops and cafes for the area next to the ACT Law Courts.

Morris Property Group director Barry Morris said at the time the company was exploring commercial opportunities for the 27,000 square metre site, but did not rule out a return to residential development at some time.

MPG acquired the site on Section 100 from Leighton Properties and Mirvac in June 2018 for $85 million, and it was excavated in anticipation of the development before the COVID-19 pandemic took hold.

The company has had better luck with its other city development, the 17-storey, 184-apartment Park Avenue project, which fronts Allara Street and City Walk, and is on track and nearing completion, despite the COVID-19 fallout in 2020.

The installation of a kinetic facade industrial artwork is almost in place, and the project will also feature a reactivated and vibrant retail space along City Walk.

Bordered by the Canberra Centre, Crowne Plaza Hotel and Glebe Park, it will inject new life into that area of Canberra city.

Will this end up as another residential area without a supermarket like New Acton and the whole Molonglo suburb? Everyone will need a car to travel to a supermarket.

Is it on stalled or installed?

The Giralang Shops in the city it would seem…

I’ve been curious about the same thing. I can’t find anything on the internet about it’s progress other than last year’s ‘it’s stalled indefinitely’ press releases. There’s no communication from Morris, nor anything new on the ACT development applications website. But it’s definitely exciting to think it maybe going ahead. It was an extremely good development proposal.