In uncertain times,
we give you certainty.
6 June 2022

David Pocock and supporters on election night. It’s in Labor’s interests for him to deliver for them. Photo: David Pocock Facebook.

The ACT may feel like all their Christmases have come at once since voters sent the Coalition packing and Labor moved into the government offices on the Hill.

Chief Minister Andrew Barr is looking forward to a more productive relationship with the Albanese Government than the Coalition and Canberrans might feel, especially with former leader Katy Gallagher in the inner circle, that the new government will fill their stockings with all sorts of goodies.

Territory rights, light rail, infrastructure, sports and convention facilities, forgiving the housing debt, social housing, land releases … There is a lot of pent up demand from nine years of Coalition government that did just enough to make it look like Zed Seselja was worth having in the Senate.

And some of Senator Seselja’s own pet projects put ACT Government demands on the backburner.

Will the floodgates open?

READ MORE Will a Federal Labor government change anything for Canberrans? The Chief Minister thinks so

Don’t expect it. All of the above are probably on the agenda, but there was always going to be a lot more on the new federal government’s mind than handing out goodies to the people’s republic of Canberra where it is becoming increasingly more difficult to find a Coalition voter.

ACT Labor might want to see the new Feds as family, but political realities such as the mega-deficit might mean Canberra’s needs get pushed down the list and doors that might have been open could suddenly close.

After all, Canberra is a Labor fortress, with even its Liberal senator set to be officially ousted, albeit by an Independent.

If Mr Barr gets the cold shoulder, will he be up for the stoush? A lot of old excuses about a Coalition government that just doesn’t get the ACT aren’t going to cut it.

There may be a lot of big projects getting underway at the moment, such as the Canberra Hospital expansion, Woden CIT and Interchange, and light rail Stage 2A, but some areas of Canberra are crying out for facilities that are the lifeblood of communities, particularly in the newer suburbs, but also where renewal is a happening such as Woden Town Centre.

A lot of focus was on sports facilities during the election – from stadiums to tennis centres – but it only highlighted how much of the resources are concentrated north of the lake and usually tied to the major sports bodies. 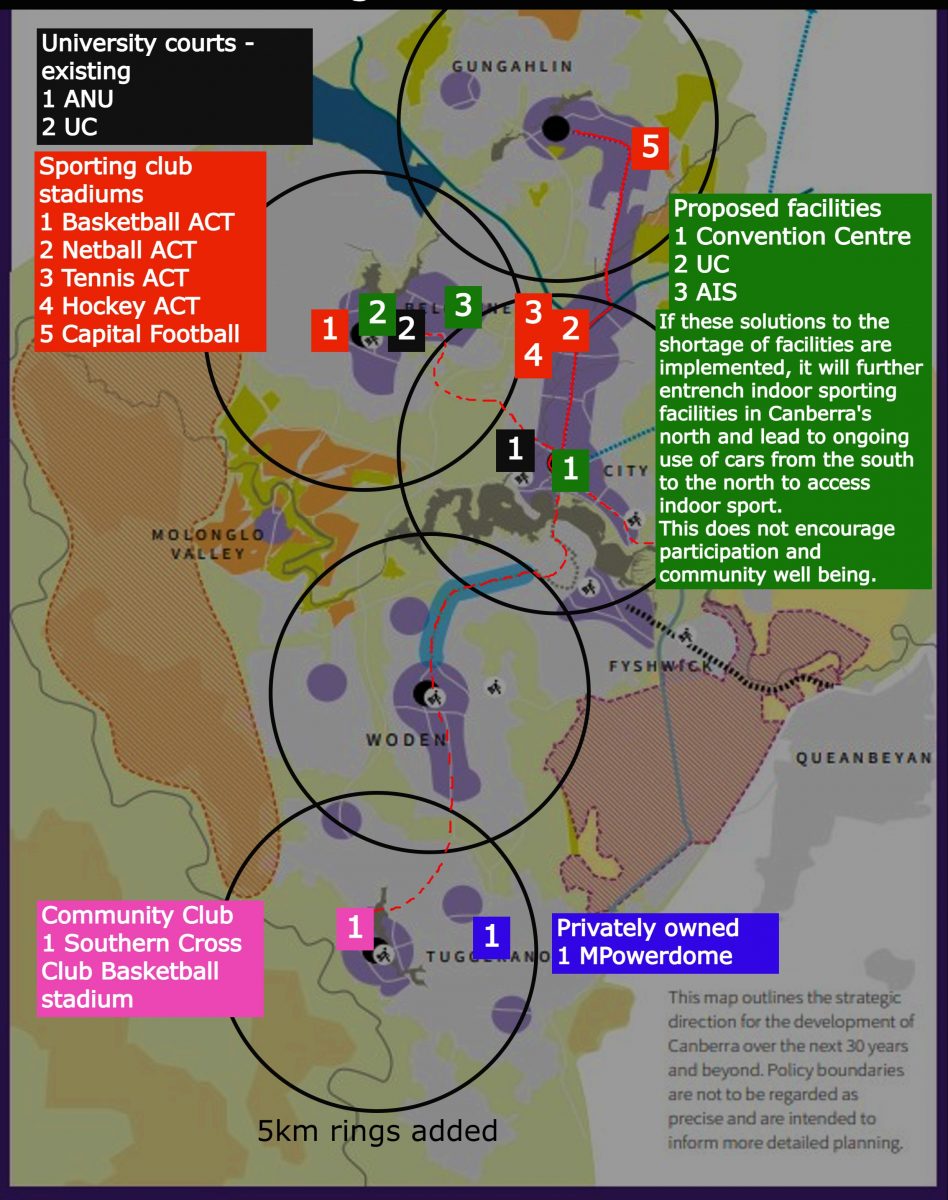 The Woden Valley Community Council has produced a map in a call for equity showing where the facilities are, and the south is a desert compared to the north.

From the inner south to Weston Creek-Molonglo to Tuggeranong, there are hardly any modern indoor multi-sports halls to service growing populations and limit the distances that families have to travel.

The buzzword appears to be co-location, with scattered school halls expected to fill the gap in resources.

This is the sort of grassroots constituent demand that the MLAs and MPs face and that voters expect action on.

It is the sort of thing that can be more of a burning issue than whether the ACT’s housing debt can be forgiven, important though that may be.

The question is, what cards will Mr Barr be prepared to play if the Commonwealth won’t play ball.

One would be the soon-to-be-senator David Pocock, who, along with the rest of the Senate crossbench, will play a role in the fate of government legislation.

Getting a fair share of infrastructure spending was a key platform of his campaign, and while he has said his vote is not for sale, it will be in Federal Labor’s interests to ensure there continues to be one less Liberal Senator and for the ACT’s historic Senate result to be not just an electoral blip.

Politics is about common goals and alliances, and success comes down to achievements.

Yes, the Albanese Government may well deliver on the ACT’s wishlist over time, but if the Territory falls off the radar, Mr Barr could do worse than looking to Mr Pocock to remind the comrades that Canberrans should no longer be taken for granted.

Woden has the heated pool at the hospital….

Pocock hasn’t won yet. Still a strong swing towards the major parties in the absent and declaration votes.
For Pocock to win, likely the green seat needs to be split or even David will give his votes up for another green seat. Zed is also an outside chance.

Picture an elephant. Now picture a flea on that elephant. That’s how much influence he will have

The cost of living savings David Pocock promised during his campaign will be very handy. Also cant wait for the new stadium, I assume he will also deliver that this term?

I expect Albo will be saying “David Who”?
As a standalone Independent in the Senate, he has no influence.

Yes, nothing has really changed. We now have all Labor plus one lone Independent and with a new Federal Labor Government we will taken for granted more than ever.

Canberrans claim they are the best educated in the country yet they couldn’t see this happening? Give me a break.

You can remove another one of those indoor sporting facilities off the Southside part of the map.

M Powerdome closed a number of years ago, because of a minor and inconsistent zoning issue where the ACT government suddenly blocked parents using the little dirt car park right beside the centre.

The ACT government doesn’t crack down on builders and construction workers parking on dirt areas in other designated Urban open spaces or even Nature Reserve land around Clunies Ross St in the inner north. But they’re happy to crack down on a few cars using a sports centre that provided a cheap indoor sports option for Tuggeranong kids.

I note the dirt car park is still regularly used by people who walk in Fadden Pines and even ACT government contractors.

Poey is their puppet.

It’s funny that most of the big infrastructure projects listed in the article simply don’t make sense from an economic or social standpoint. As Andrew Barr has already said, there is no money for things like new stadiums or a convention centre and won’t be for a while (if ever).

Sidenote that it’s ironic for Andrew Barr to make those kinds of statements when the reason there isn’t any money is because his government has already spent it on his own unviable pet projects.

The projects listed have already been assessed and don’t stack up. The only way they get funded is through the same types of dodgy assessments and political manipulation that the previous government engaged in, that the author is apparently opposed to.

However, I do like that statements around a “fair share” of federal infrastructure spending is now just code for getting our slice of the pork barrelling that has happened elsewhere. Who needs robust and consistent assessment methodologies? It’s only a rort if you aren’t in on it.

I dont see why the ACT will do well out of a Labor govt. All the Labor politicians were safely re elected and never under threat. The Govt knows they could run a pedophile cannibal Satanist ring in a pizza shop and Canberrans will still vote for them, so they don’t have to do anything for Canberra. they will focus on marginal seats.

Shouldn’t the headline be “Will Barr be Pocock’s ally in trying to keep the Feds honest?” Andrew Barr consistently played politics all through the term of the coalition government and he’s unlikely to stop now. We’ve already seen the federal ALP cancel the additional LR funding they’d promised, cutting it back to the same amount promised by the coalition, and just days after the election Albanese came out saying that restoring the ACT’s right to make it’s own laws on VAD is not a priority. I haven’t heard Barr come out and criticise these decisions coming from his federal colleagues.

“ACT Labor might want to see the new Feds as family, but political realities such as the mega-deficit might mean Canberra’s needs get pushed down the list and doors that might have been open could suddenly close.”

It’s nice to speculate but the above says it all.

Last term the ACT received 2.2 billion in federal infrastructure spending. If we get less than that then labor and pocock should hang their heads in shame.

Woden has been complete shafted when it comes to sporting facilities, they have NOTHING.

Every-week we drive our children out to Tugernong or Stromlo for swimming lessons, a 20km round trip.

We sit there with all the other parents from Woden, who live within walking distance from the failed swimming pool in Phillip.

Barr government would know this, they have our addresses on file – I’d hazard that more than 65% of those that swim at these facilities drive from the inner South to support these pools.

Look i totally agree that things are not getting done in parts of Canberra, but if you run any kind of budget you know, you can’t do everything at once. As much as Canberrans think a 20km round trip is a lot, it really isn’t. But I completely agree the pool at woden needs to be addressed. Probably won’t happen until the new Ice rink at tuggeranong is built (by private investors not the gov) and that whole block can be demolished and rebuilt. Driving 10-15 minutes though isn’t really IMO an inconvenience, not compared to pretty much any other city in australia.