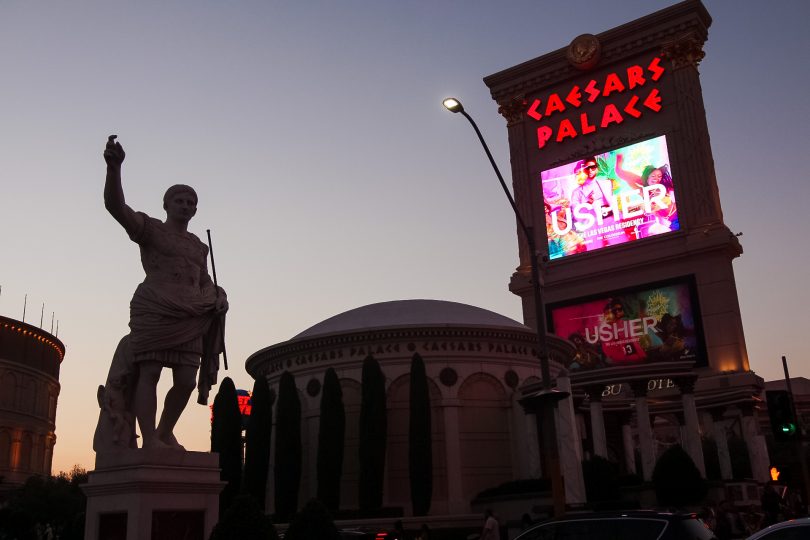 The ACT Government currently holds shares in several companies that profit from the gambling industry, including the US-based real estate company that owns Caesars Palace hotel and casino in Las Vegas.

However, a spokesperson for the ACT Government has flagged that an updated definition of its Responsible Investment screening criteria will come into effect in December 2021 and could affect investment in companies that profit from gambling operations.

The ACT Government, according to its September update, has direct shareholdings in companies that manufacture gaming machines and technology, such as BetMakers Technology Group, Aristocrat Leisure and Tabcorp Holdings Limited.

It also has shares in Crown Resorts Ltd.

In ACT Budget estimates hearings, ACT Minister for Gaming Shane Rattenbury was questioned about these shareholdings by Opposition spokesperson on Gaming Mark Parton. Mr Rattenbury said he was unaware of these investments, but would now raise them with ACT Chief Minister Andrew Barr.

Mr Rattenbury said the Greens had long been advocates for “cleaning up the ACT’s investment portfolio” and these shareholdings had “escaped his attention” until now.

“I don’t think that is a place we should be seeking to benefit from, from an investment portfolio point of view.”

Mr Parton told the hearing that if a bank held shares such as these, Mr Rattenbury would encourage protests and a boycott against it.

“This is the sort of investment portfolio that if a bank or some other organisation had I could imagine you supporting protests outside the door,” he said.

Canberra Liberals MLA Peter Cain questioned how Mr Rattenbury could have been unaware of these shareholdings, given his former colleague and fellow Greens MLA Caroline Le Couteur had previously raised it in estimates hearings in 2017.

Mr Rattenbury later said in a statement he was grateful to Mr Parton for having brought these investments to his attention.

“I will raise with the Chief Minister the need to make changes so the ACT divests from shareholdings in companies that derive profits from gaming,” read the statement.

A spokesperson for the ACT Government flagged an update to its Responsible Investment screening criteria from December 2021 to include business activity exclusions including gambling operations.

The ACT Government defines gambling operations as “companies that own or operate gambling facilities such as casinos, racetracks, bingo parlours, or other betting establishments, including horse, dog or other racing events that permit wagering; lottery operations; online gambling; pari-mutuel wagering facilities; bingo; pachislot and pachinko parlours; slot machines; Jai-alai; mobile gambling; and sporting events that permit wagering,” according to the spokesperson.

However, this will only apply where gambling operations lead to revenue greater than 10 per cent.

It’s unclear exactly whether this updated Responsible Investment screening criteria will mean any of the aforementioned shareholdings will have to be sold or divested.

Other new additions to the criteria include tobacco companies, and companies where there is strong evidence of involvement in controversial weapons and direct exposure to proven fossil fuel reserves.

The ACT Government spokesperson said it already supports industry exclusion-based, or negative screening, as part of its Responsible Investment policy.

They continued by stating that the current decision-making process in relation to investments in directly owned company shares takes into account internationally recognised norms and conventions relevant to responsible investment.

The norms-based investment criteria applied are based on the United Nations Global Compact, said the spokesperson.

According to the ACT Government spokesperson, the government’s total investment assets currently sit at $5.5 billion, and these are diversified across a number of asset classes, including money market securities, fixed interest, equities, unlisted property, private equity and infrastructure assets.

The full 21-page list of the ACT Government’s listed company shareholdings as of 30 September, 2021, can be viewed here.

The Catholic club in Liverpool NSW Australia 🇦🇺 have pokies.

That’s the the World 🌎

Seems to me like wilful ignorance, considering how many Labor clubs we have here.

If the green’s Caroline Le couteur was aware and questioned the ACT government? Surely Shane would have known https://www.smh.com.au/national/act/ethics-of-act-governments-investment-probed-20170619-gwu69v.html

What rubbish. As if Barr and Ratts didn’t know. It’s all smoke and mirrors with Australia’s most dysfunctional coalition government. It’s no wonder there is no anti corruption body here. The ACT Government is a joke. Replace it with a few NSW Councils who would do a much better job of running the place.

Don’t the Labor Clubs have pokies?

Martin that’s ACT Labor Party – not the territory government. I didn’t realise the gov does too…

Dan Rayner yes you are correct, the Clubs are owned by the ACT Labor Party which is a separate thing from the Labor-led ACT Government.
On the other hand… most government MLAs are members of the Labor Party and surely must be aware of the significant gambling revenue their party gets from the Clubs. And even though Shane Rattenbury is Greens not Labor, it would be incredible if he was not also aware of that arrangement. One way or another, the ACT government has relied heavily on gambling money for at least a couple of decades, and have done nothing about it up until now. I don’t buy this “oh really wow who knew” stuff: they all knew.

Martin 100% in agreement on all of this.

And stop dissing the Labor Clubs…I have taps to protect 😂