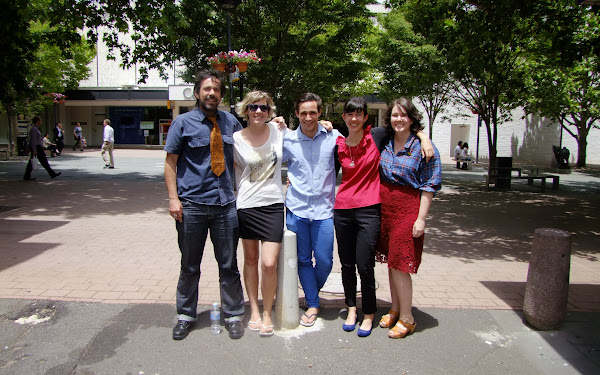 They look fairly happy about it.

Today Joy Burch and Andrew Barr announced $85,000 in joint funding for You Are Here, Canberra’s little festival that could.

They did this in the alleyway behind Impact Comics. 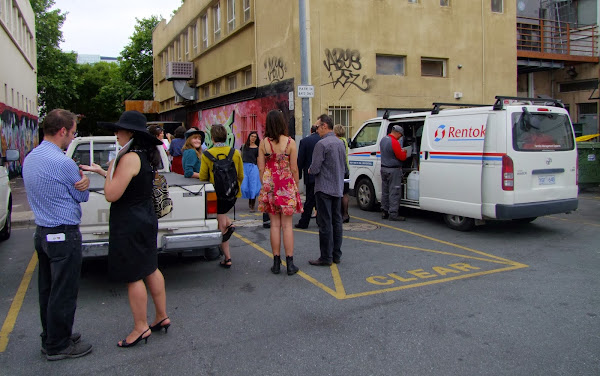 You Are Here have used this space as a venue during the festival before, but on those occasions the traffic had been blocked off and a lot of effort had been put into decorating and cleaning up the space.

Today, it was just an alleyway full of trash, traffic, and surly electricians.

So members of the media, several artists, a few politicians, and of course the YAH producers themselves exchanged pleasantries and posed for photos while being constantly disrupted by parking motorcycles and the the Rentokil Pest Control van.

Confused and grumpy looking workmen carrying trash cans and ladders pushed past us like they didn’t care about Canberra’s ongoing alt-art scene.

Then it started to rain.

It was the best media event I have ever attended.

You Are Here was birthed into 2011 and grew out of a desire to fill the city with art and invite people to rethink about how they related to the city they live in. Empty store fronts, nail salons, and alleyways became venues for performances.

You may remember that I had some positive things to say about this years festival.

You Are Here’s collection of producers have been hard at work planning next years event, however there has been a question mark over the even due to the lack of funding. Previously the festival had been funded as a part of the Canberra Centenary program.

This is good news for arts lovers in Canberra.

Several artists came out to help celebrate the news.

Dancer Adelina Larsson twirled up and down the alley while slam poets Zoë Erskine and Amelia Filmer-Sankey filled the space with words. The sun then came out and suddenly it wasn’t an awkward alleyway anymore.

They may not have intended it, but in a way this little media event was a perfect preview to You Are Here 2014. 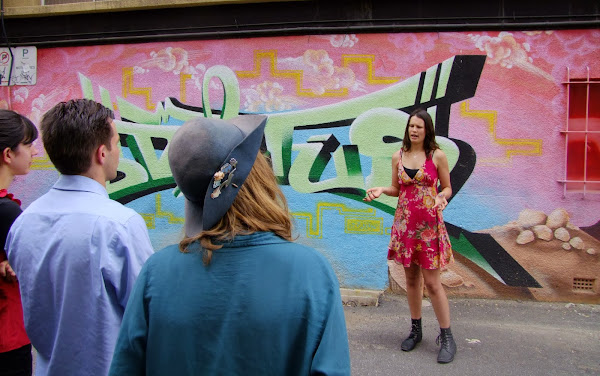 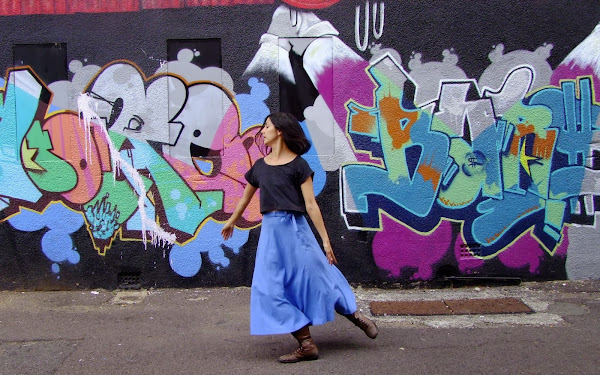 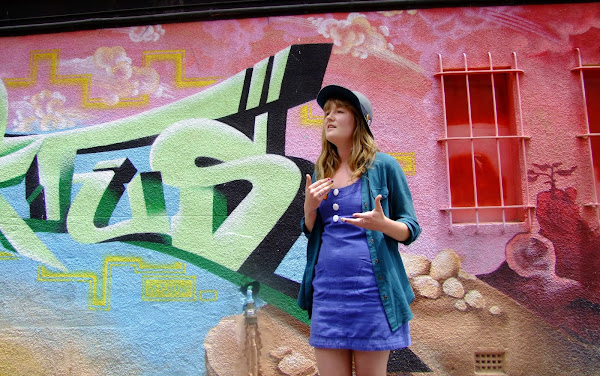 9 Responses to You Are Here secures $85,000 in funding
Filter
Showing only Website comments

sorry, just where am i again?

must be some play if it costs $85k and it’s been shown in an alley .

Not just one play! A whole season of plays!

Gross. Yo Johnboy, Joel, I know you guys have to keep the comments flowing in, but this sort of ignorant derogatory trash doesn’t contribute anything worthwhile to the conversation.

Hey ‘Gazket’, I assume if I met you in real life you’d either be too ashamed or too afraid to refer to anyone as ‘that bitch’ – you’re disgusting and you have no place in the discourse.

Nevertheless, despite puerile backsliders, Canberra will continue to be the home of extraordinary, unique and weird creativity. Now and forever.

How much of the budget will be eaten up by renting that great piece of Canberra art, Skywhale from the Melbourne based owner?

That bitch took all the credit for sky whale and didn’t mention the A.C.T. at all. What a scab on society
must be some play if it costs $85k and it’s been shown in an alley .

How much of the budget will be eaten up by renting that great piece of Canberra art, Skywhale from the Melbourne based owner?

Loved this festival this year and really looking forward to the next one.

The Rentokil van you mention made me think it was a horrible plan to rid Canberra of all those pesky creative types!

This is great news. I really enjoyed getting to as many events in the festival as I could.

Robyn Holder - 2 minutes ago
Nat Thomas I'm waiting for someone to give me a good reason.... View
Cary Elliot Johnson - 3 hours ago
Claire Lee Koo because its a democracy with varying opinions on an open column. View
Elizabeth Jones - 3 hours ago
I saw the petition but it wasn't clear it was supposed to be a few fenced playgrounds per region. I know being in an older pa... View
Opinion 65

Iaian Ross - 25 minutes ago
Time Thief is more impressive at night than during the day. Seriously. View
Business 2

Peta-Rene Prior - 1 hour ago
All kids should go to boarding schools?? Perhaps get all kids attending school to start with. View
Stas Idowu - 2 hours ago
Synergy Group View
Lifestyle 8

chrisJ - 4 hours ago
It is good to hear that new public toilets are included at Kaleen and Duffy. None of the 11 centres listed for an upgrade are... View
Public Sector 5

kenbehrens - 4 hours ago
Isn't bringing forward future infrustructure builds going to create a construction vacuum down the track? The other issue of... View
shannos - 4 hours ago
Exactly, investors chasing capital gains and creating a self -sustaining ponzi growth model at the expense of our younger gen... View
shannos - 4 hours ago
Too much emphasis on infrastructure and construction which is cyclic transient employment relying on developers growth model.... View
Lifestyle 11

Jenny Drenkhahn - 5 hours ago
not to mention changes further South in the Bega Valley Shire; rebuilding in Cobargo and Tathra, Twyford Hall in Merimbula ;... View
News 18

Clarence Beale - 6 hours ago
Hi Myra, so so sorry to hear about this. They will definitely look after you with a refund or a credit. If they haven’t alr... View
Community 43

@the_riotact @The_RiotACT
#Apprenticeship growth in the ACT is the slowest in the country, and the Opposition and #industry leaders are calling on the Barr Government to do more https://t.co/VOy53VsEdS (1 hour ago)

@the_riotact @The_RiotACT
A Canberra creative team appeared on ABC TV's @GruenHQ for the fourth time last week, convincing #Australia that all kids should go to #boarding school, with the slogan ‘We’re all better when they’re boarding’. Here's how they went https://t.co/v2nlG9mSZg (3 hours ago)