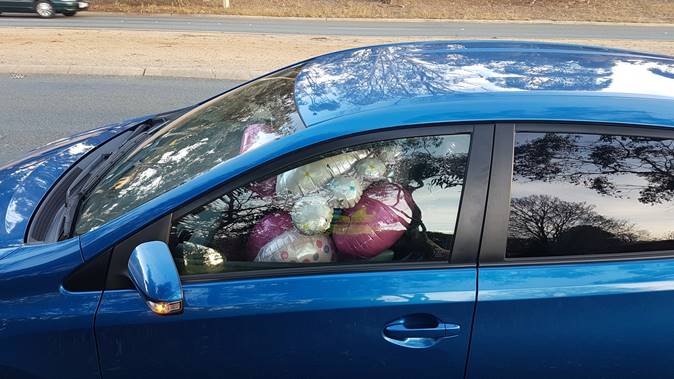 ‘Sorry to burst your balloon’: Police handed a $200 fine because balloons were obstructing the driver’s view. Photo: Supplied by ACT Policing.

A driver has been left feeling deflated after being fined $200 for driving with balloons in the passenger seat that was obstructing their view.

On 12 June, police pulled a driver over in Page after noticing the balloons in the front seat. An ACT Policing spokesperson said the ACT Policing Traffic Operations member deemed that the driver’s view to the left-hand side of the vehicle was obstructed by these balloons, which is why they were fined.

“It is extremely dangerous to drive with an obstructed view and the ACT Policing Traffic Operations member who stopped the driver considered this, and other factors, when they decided not to caution the driver for the offence,” the spokesperson said.

“They would also have been fined if the balloons were in the back seat, as this would have obstructed the driver’s view out the back window of the vehicle.

“A driver must not drive a motor vehicle unless they have a clear view of the road, as well as traffic ahead, behind and to each side of the vehicle.

“In this instance, the driver would have been better off transporting these balloons in the boot of their car, which would not have obstructed the view from their vehicle.”

Officer in Charge of Traffic Operations, Acting Station Sergeant David Wills said the incident is a timely reminder to Canberra drivers not to drive with an obstructed view, including from frost or fog in these colder months.

“I don’t know how anybody could be OK with another person driving a vehicle without being able to fully see where they are going,” Acting Station Sergeant Wills said.

“It looked like the driver couldn’t see out of half their vehicle. This is simply dangerous.”

Shane Westmore - 23 minutes ago
Ch.9 are still stuck in the 90s & so are many of their viewers... it's like they want you to order Kayo View
Anthony Chase - 32 minutes ago
Its got little to do with football and everything to do with ratings. View
Marlene Valenzuela - 1 hour ago
Possibly not.... Not unusual!! View
News 5

ssek - 40 minutes ago
Road safety = We are seeking new revenue streams. Also amazing I never see these on anything but long straight bits of road,... View
News 9

James Manukich - 11 hours ago
Well Done 👌👌👌👌👌 View
Gary Hatcliffe - 13 hours ago
Wacky-doo! View
Nassim Rezakhani - 14 hours ago
Congratulations Jason!! One of the best agents around!! Thank you for the amazing auctions you’ve done for us in the past!... View
Sport 11

In a major coup for the ACT, Manuka Oval will host two limited overs internationals between Australia and India in...
Food & Wine 57

Civic will see new life breathed into it with the opening this Thursday (22 October) of the long-awaited Verity Lane....
Opinion 25

@The_RiotACT @The_RiotACT
The ACT has Australia's second-best performing economy according to CommSec, a result of stable employment and few cases of COVID-19 https://t.co/rAzcfDeDjI (24 minutes ago)