The second half of 2020 brought welcome rain in the ACT. Photo: Michelle Kroll.

After a blistering start, the ACT enjoyed a comparative drenching after three years of drought, with rainfall nearly 30 per cent above average to give the Territory its wettest year in a decade, according to the Bureau of Meteorology.

In a month of bushfires, Canberra recorded its highest temperature on record of 44°C at Canberra Airport on 4 January, 2020, and while it was milder at the back end of the year, nights were warm with mean minimum temperatures above average, and maximums just above average.

Nationally, 2020 was the fourth-warmest year on record, with Australia’s area-averaged mean temperature for the year 1.15°C above the 1961-1990 average.

In the ACT, August and October were especially wet, with Canberra Airport receiving more than double its average monthly rainfall in both months.

Heavy rain fell on numerous occasions between late July and November, causing river rises and disruptions to low-level river crossings, although only once, on 8-9 August, did the Molonglo River reach minor flood warning thresholds.

March and April were also significantly wetter than average, and the only month in which rainfall at Canberra Airport was less than half the monthly average was January.

As a result, ACT dam storages are now virtually full.

There were nine days of 35°C or above at Canberra Airport in 2020. This is above the long-term average of five, but the fewest in a year since 2015. Seven of these days were in January.

Maximum temperatures were also well above average in July, which was the fourth-warmest on record at Canberra Airport.

Minimum temperatures were also above average in most other months, except for March, May and June when they were close to average.

There were 42 nights with minimum temperatures below 0°C at Canberra Airport, well below the average of 61 – the lowest number of nights below freezing since 2009.

The year 2020 started with heat, fire and smoke. Photo: File.

The warmest day was 44°C on 4 January, 2020, and the coolest day was on 22 August when the temperature reached just 7.5°C and snow fell in many suburbs and settled widely above 750 metres.

The early part of the year was marked by severe smoke pollution from bushfires in the ACT and southern NSW, and air quality stayed into the hazardous range on many days.

The ACT had its hottest ever day on 4 January, when the temperature reached 44°C at Canberra Airport, a record for any ACT site, surpassing the 42.8°C at Acton on 11 January, 1939.

Canberra Airport had its hottest February day on record on the first day of the month with 42.7°C, while the minimum of 26.7°C on the 2nd was a record there for any month. The ACT record high minimum is 27.2°C at Acton on 14 January, 1939.

Combined with the record set in December 2019, Canberra Airport had its hottest day on record for each of the three summer months.

January also produced one of the most severe hailstorms recorded in the ACT, with stones four to six centimetres in diameter falling across a region extending from the southern half of Belconnen through Acton to the inner southern suburbs. Extensive damage was reported to buildings and motor vehicles, with insured losses of several hundred million dollars.

A major early season cold snap, with snow in the Brindabellas, hit the ACT at the end of April. The mercury struggled to 9.7°C at Canberra Airport on 30 April, the first maximum below 10°C at the site in April since 1952.

Australia had its warmest spring on record in 2020, and rainfall across the year and country was average, with higher falls in the north and east. 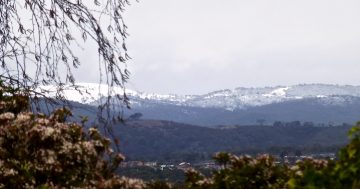