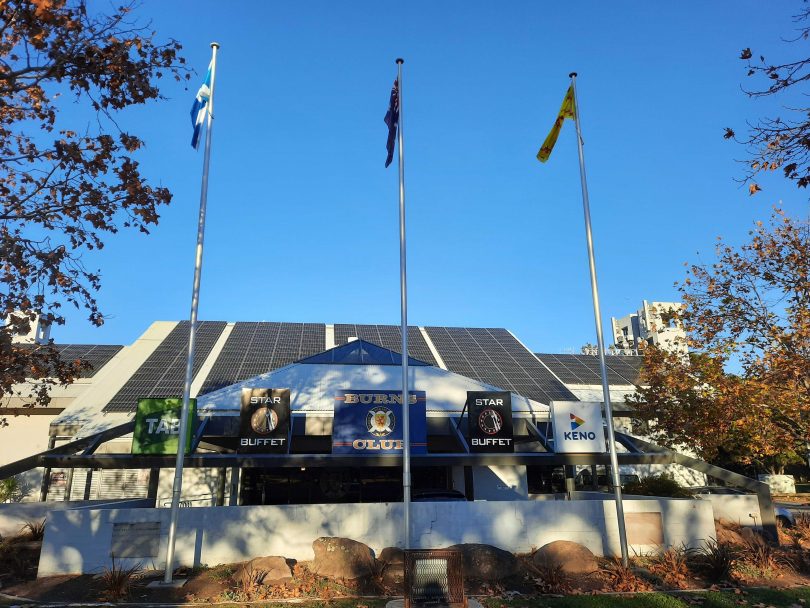 The Star Buffet at the Burns Club in Kambah is listed as an exposure site for 13 November between 8 pm and 9 pm. Photo: Region Media.

The ACT has recorded six new cases of COVID-19 to 8 pm last night.

A total of 2173 negative tests were returned in the past 24 hours.

Yesterday the ACT had 12 new cases.

There are 173 active cases in the ACT, including three people in hospital, one in ICU and one requires ventilation.

According to ACT Health, 96.6 per cent of Canberrans (aged 12 and above) are now fully vaccinated.

A number of new casual contact exposure sites have been added to the ACT Government’s COVID-19 exposure sites list, including popular hospitality venues across the city.

In Canberra’s south, Rashay’s Woden is a casual exposure site for Saturday, 13 November, between 7:30 pm and 9 pm. On the same day, the Star Buffet at the Burns Club in Kambah is listed from 8 pm to 9 pm.

The Woden Valley Gymnastics Club is also listed between 4 pm and 5 pm on Friday, 12 November.

The entire Palace Electric Cinema venue in the Nishi Building, New Acton is now a casual contact exposure location on Tuesday, 9 November, between 10:30 am and 5 pm.

No new schools have been exposed to the virus in recent days, according to ACT Health.

The total number of exposed schools stands at 21 (excluding the Canberra Girls Grammar School Boarding House which was also listed as an exposure site last week).

ACT Chief Health Officer Dr Kerryn Coleman yesterday confirmed 89 cases are linked to schools with a number of other clusters emerging in the community.

There are 207 people in hospital with COVID and 33 in ICU.

In Victoria, there are 996 new cases and nine deaths.

Around 87 per cent of the state’s 12-plus population is now fully vaccinated.

There are 357 people in hospital with COVID, 58 in ICU and 35 require ventilation.

Renee Osburne - 6 hours ago
It’s disgusting we pay rates and expensive ones at that, and the Government can’t even provide a basic service. Even the... View
Mateusz Jan - 7 hours ago
Anthony Nolan did you give the goats to the act government... View
Public Sector 41

Phillip Scharf - 6 hours ago
Liam O'Toole you said it and it's not like anyone's suggesting an alternative solution View
liberalsocialist - 7 hours ago
This would be of the same ilk (politician) that demands immediate responses and replies for all their questions yesterday - a... View
Richard Cottrill - 7 hours ago
The UK follows the model of totally outsourced IT (at least in the departments I consulted to). They were routinely fleeced b... View
News 53

kenbehrens - 7 hours ago
Pretty weird to assign tariffs around whether the house faces north, its size and whether the person is on welfare or not. Th... View
chewy14 - 8 hours ago
Retro, One of us in denial, that's for sure but it isn't me. You still think fossil fuels can compete with cheaper renewable... View
Capital Retro - 10 hours ago
You are still in denial that renewables are where they are solely because of massive subsidies. At the rate coal fired power... View
Community 5

Norm Cheeseman - 7 hours ago
My great grandfather Noah Cheeseman was the first owner, the pub was built by his father in law Jeremiah Barrett View
Cheryl Thuillier - 8 hours ago
Was a great place. View
Motoring 9

Jose Vega - 9 hours ago
Because they think they can get more votes as per Trump and his extreme right wing mates in the USA. Just that no other reaso... View
Lifestyle 6

@the_riotact @The_RiotACT
In the last week alone, @genesisowusu took home 4 ARIA and two Triple J awards. We sit down with the #Canberra artist behind Owusu's most iconic piece of gold jewellery - his gold grill https://t.co/r576TmanM0 (8 hours ago)

@the_riotact @The_RiotACT
New details shed light on what police allege happened during a dramatic #prisonbreak in July when a car was rammed in broad daylight as jail staff were transporting a #detainee to hospital https://t.co/c8KUV2DWZN (10 hours ago)