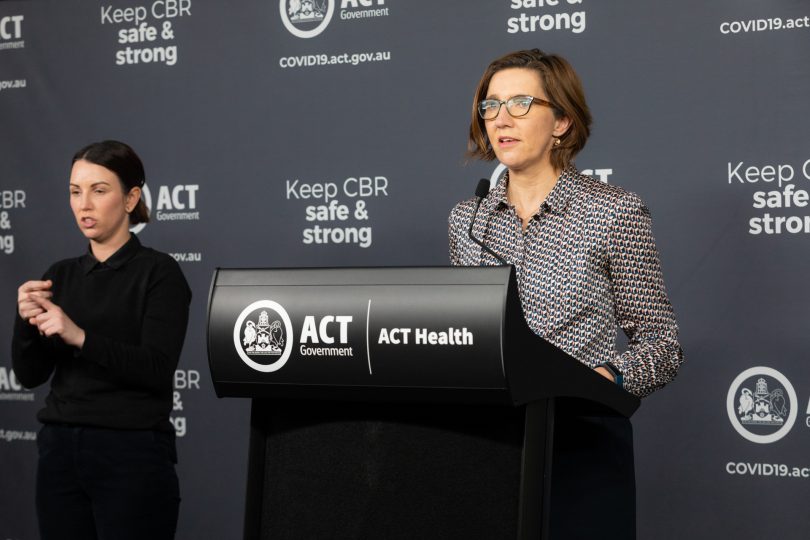 ACT Health says it’s likely the BA.2 sub-variant of Omicron could become the dominant strain of COVID-19 in coming weeks, as the Territory records another 791 new local cases of the virus overnight.

It’s the highest number of deaths the ACT has ever reported in a single 24-hour period and takes the Territory’s pandemic death toll to 37.

However, ACT Health says one of the deaths occurred in February.

ACT Health has extended its condolences to the family and friends of these people.

NSW is expecting a similar situation, with the state’s Health Minister Brad Hazzard warning yesterday case numbers could double within the next four to six months.

Acting Chief Health Officer Dr Vanessa Johnston said local daily caseloads are expected to rise to around an average of 800 a day but it’s unclear if they will then stabilise.

Early reports indicate the BA.2 variant could be even more infectious than BA.1 but there’s no evidence it can evade vaccines or cause more serious disease, epidemiologists believe.

However, ACT Health is only able to conduct genome sequencing on positive PCR samples – which currently amount to about half of all positive cases reported. Positive results returned via a rapid antigen test cannot be sequenced.

“Due to the number of cases currently in the ACT, genomic sequencing (to determine virus strain) is being undertaken on less than 10 per cent of cases.

“Sequencing is prioritised for hospitalised cases, outbreaks in high-risk settings and returned overseas travellers,” a spokesperson for ACT Health said.

The BA.2 sub-variant was detected in around one-third of samples sequenced last week.

Health authorities are unsure whether the “slow increase” in the seven-day rolling average can yet be attributed to the spread of the new variant or whether it’s simply due to a variety of factors including increased community movement and an increase in cases in the five to 11 age group leading to an increase in their household contacts getting tested and subsequently returning positive results.

According to ACT Health’s latest epidemiological report – which covered the week of 1 to 6 March – the seven-day rolling average sits at 595 cases. In the week of 21 to 27 February it was 536.

But the increase in cases is yet to affect hospitalisations.

Between 1 December 2021 and 6 March 2022, there were 330 new admissions of people with COVID-19 to ACT Public Hospitals, accounting for less than 0.7 per cent of all reported COVID-19 cases during this time, ACT Health says.

Of ACT residents aged five to 11, 10.8 per cent have received two doses.

There are now 998 people in hospital with the virus and 39 people in ICUs around the state.

Victoria has reported 10 deaths overnight and an additional 6811 cases of COVID-19.

There are now 185 people hospitalised with the virus and 27 patients in the state’s intensive care units.