Another assault outside the Quick and Go 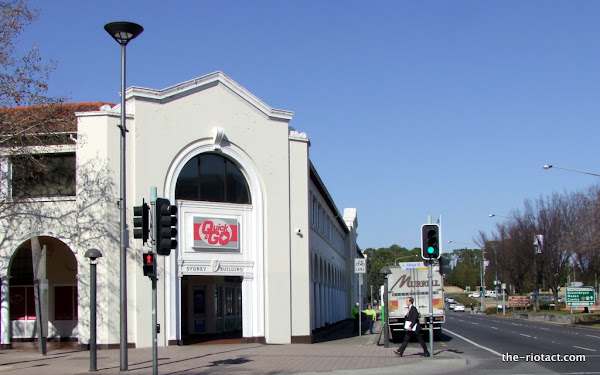 About 1.50 am the men entered the Quick and Go convenience store located on the corner of Northbourne Avenue and Alinga Street, City. They were observed by a shop attendant to place a number of items inside their clothing. The shop manager was summoned who requested they return the items and leave the store.

As the victim attempted to shield himself, he was kicked in the head by the third man. The assault continued with the victim being punched and kicked by the three men before they fled the store.

A short time later police were flagged down by the victim. They were given a description of the alleged offenders and conducted a search along City Walk, locating the men a short time later. The three men were arrested and taken to the ACT Watch House.

Police are appealing for any witnesses to the incident to contact Crime Stoppers on 1800 333 000 or via the Crime Stoppers website on www.act.crimestoppers.com.au. Information can be provided anonymously.

Perhaps it’s time to change the retirement conditions for SAS troopers etc – rather than money, give them a 24-7. And keep them on the military books so that anything they do can be declared ‘classified’ if sufficiently amusing.

Three men have appeared in the ACT Magistrates Court over the alleged bashing of a shop manager in Civic on Saturday morning.

“. . alleged bashing”. I wonder if the victim agrees that it was only alleged.

Three men have appeared in the ACT Magistrates Court over the alleged bashing of a shop manager in Civic on Saturday morning.

Police arrested Emir Ajetovic, 21, Aldin Kahric, 24, and Ermin Mehic, 24, after the shop manager of the Quick and Go convenience store in Civic was bashed early on Saturday morning.

Great logic there. Three guys savagely assaulting somebody, then continuing to mull around in the same area. Did they think the store owner was just going to let it slide?

Quick & Go at that time is basically for trashed clubbers to buy cigarettes. I agree with cocopops idea of just a window. I suppose they will have to decide if it’s a risk they want to accept.

They should follow the petrol stations by locking doors and have a window to do transactions, customers line up at the window, request items they want and pay to receive goods. Much safer for the attendants and it will also will stop theft during those late night hours.

Close the clubs of a weekend and the Quick and Go has no market.

Being open at that time, in that location, is a little mad if you ask me. Most young adults who go out clubbing these days are drinking themselves stupid and if this isn’t the case they are usually off their faces on some illegal substance.
Close the clubs for a weekend and see if this happens… 🙂

Should rename it the ‘Kick and Go’

Should rename it the ‘Kick and Go’

Tjilpi1 - 26 minutes ago
The ACT Government denied all the way along that tjey would not be building over the existing lake bed ... that it will all b... View
Colin Vivian - 60 minutes ago
Elroy Jones and if you look at the ACT audited financial statements you’ll find net financial liability, net debt, net oper... View
Elroy Jones - 3 hours ago
Ruth Brown that’s because they’re underground (where they should be!!) DA won’t get through this Gov without serious at... View
News 1